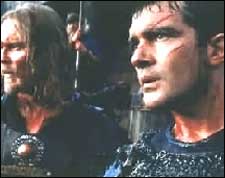 Deepa Menon / fullhyd.com
EDITOR RATING
6.0
Performances
Script
Music/Soundtrack
Visuals
NA
NA
NA
NA
Suggestions
Can watch again
NA
Good for kids
NA
Good for dates
NA
Wait to rent it
NA
What is it with our city and the drudging up of old Hollywood flicks starring Antonio Banderas? First it was Yucks Vs Server, and now this. Do we love the man so much that in the absence of recent flicks we feel compelled to dig up screenplays past? Next they’ll be boasting the premiere of The Mask Of Zorro. I say we boycott this insulting trend thereby forcing distributors to release films made during the present millennium. In the meanwhile, we have a review to patch together from various internet sources.

Ahmed Ibn Fahdlan (Antonio Sleepy Eyes Banderas), like so many men before him, falls for the wrong woman. This one happens to be married to a high-ranking official in the Arab kingdom and Ahmed soon finds himself riding a small horse in the midst of a taller, meaner Viking gang, somewhere in Central Asia. To help him make sense of their uncivilized grunting – as opposed to his refined series of throat noises – he is accompanied by the genial Melchisidek (Omar Sharif), who soon explains to our man that foreign diplomatic service occasionally involves the fighting of man-eating tribes. Gaaak, says our man.

When the Vikings are called to war a mysterious band of flesh-chomping beasts, Ahmed tags along reluctantly to fill the place of the thirteenth crucial warrior. Sullen and scrumptious, he sets out first proving that his horse is not, in fact, a dog, and then moving onto more glorious victories. His hygienically-challenged comrades soon come to regard his grunts and his book learnin’ with due respect. You, however, might want a little more conversation. Well, it’s not going to happen.

Based on Crichton’s Eaters Of The Dead, the plot moves further into the hills where a village is being held siege by what seems initially to be a supernatural force, that kidnaps people, kills them, and gnaws at their decaying flesh. The warriors’ first encounter with the bear-like creatures leaves them bloody, beaten and missing a head. But when they figure out that these frightening beings are actually painted tribesmen in bear-fur, they lose some of their jitters and rise fiercely to battle.

There’s very little here by way of either character essay or group dynamics, The 13th Warrior is largely a tale of fighting and killing, although the hero does make time for a roll in the hay. Heads are ripped off with casual ease, horses are toppled over magnificently and there’s plenty to keep the gore-lovers pleased. As in most stories of battle, you have tales of honor, leadership and skirmishes on the sidelines.

Nothing very far out and nothing remotely memorable, the movie still makes for some general entertainment on an evening of few choices. The boycotting idea still sounds good, though.

ADVERTISEMENT
This page was tagged for
The 13th Warrior english movie
The 13th Warrior reviews
release date
Antonio Banderas, Omar Sharif
theatres list
Follow @fullhyderabad
Follow fullhyd.com on
About Hyderabad
The Hyderabad Community
Improve fullhyd.com
More
Our Other Local Guides
Our other sites
© Copyright 1999-2009 LRR Technologies (Hyderabad), Pvt Ltd. All rights reserved. fullhyd, fullhyderabad, Welcome To The Neighbourhood are trademarks of LRR Technologies (Hyderabad) Pvt Ltd. The textual, graphic, audio and audiovisual material in this site is protected by copyright law. You may not copy, distribute, or use this material except as necessary for your personal, non-commercial use. Any trademarks are the properties of their respective owners. More on Hyderabad, India. Jobs in Hyderabad.