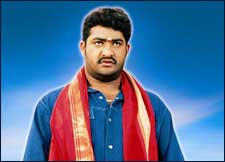 The point is that this is incredible! Right from the very first Seema flick, there has been absolutely no dilution of the old formula. And Samba tries to continue the trend, throwing all the goodies in short packets of excitement, then throwing in some rancid cliches to even it out.

The first thing you do in a faction movie is to find a location that has a bit of holiness attached to it. This serves two purposes. It adds to the melodramatic schtick when the God-like hero is introduced. The second being that it saves the makers a lot of time when they have to frantically offer prayers if their flick bombs at the box-office.

That place this time Kanchivaram. Samba (NTR Jr.) is the violent protector of a colony of weavers in Kanchivaram. His specialties include smearing volcanic amounts of holy-ash on his forehead, beating up people randomly in other towns, dancing and not referring to his grandfather more than once in 5 seconds.

Seeing the man of the town dancing and pulping-up thugs, no girl would resist. And Genelia doesn’t certainly look the types to resist much, anyway. She’s head-over-heels, head-over-pointed-6-inch-heels in love with Samba. But Samba has other ideas. He’s involved with somebody who he cares so much about that he has no room for anyone else - himself. Even you would fall in love with yourself if people are whistling hysterically whenever you break into a song.

The songs in this half are particularly exhilarating. Lawrence is back. So is NTR Jr. So are those unbelievable steps. So is the second half.

We find out that Samba was living away from the Seema because the police had banned him for too much violence. Same for Prakash Raj. This comes as a surprise because one would think he’d been banned for overacting.

Anyway, after returning to Seema, Prakash and Samba start where they had left. This time though, Prakash is left to RIP (Rest In Pieces). Prakash had mercilessly hacked and chopped Samba’s family. But Samba doesn’t do that. He mercifully hacks and chops Prakash.

The second half is a real drag, full of emotional fluff that slack-jawed yokels would thoroughly enjoy. Others can watch the intensity of the cup-holder. Bhoomika is totally wasted in this half. In the movie, actually.

VV Vinayak has tried working off the book in this one by infusing a message. If Tagore was about corruption, this is about education. Samba and his dad learn a bitter lesson when Samba’s mom dies because he cannot read-out the doctor’s number from the directory. But unlike in Tagore, the message in this one looks like a mamby-pamby candy wrapper.

NTR Jr. has given a good performance. But the stunt coordinator, the cameraman, Venu Madhav, Jeeva and the choreographer are the real heroes. In all, Samba’s a Seema flick made for a common jock to iron out.
Share. Save. Connect.
Tweet
SAMBA SNAPSHOT

NTR he proves it once again that he is an all rounder.

The Dance, action and dailogue are superb as of NTR

A 3 cheers NTR I haev to add. Thanks Vinayak and NTR

for giving us an entertainment that we can watch and

enjoy for many times.

are good. dialogues by Kona Venkat enthralls the

audience. V.V.Vinayak did a fine job in projecting the

A 5 star in production effort and in show.

ADVERTISEMENT
This page was tagged for
OSUMANI SAKO SAMBA
Samba Telugu film
Samba Telugu movie rating
samba telugu movie
sambha full movie telugu
Follow @fullhyderabad
Follow fullhyd.com on
About Hyderabad
The Hyderabad Community
Improve fullhyd.com
More
Our Other Local Guides
Our other sites
© Copyright 1999-2009 LRR Technologies (Hyderabad), Pvt Ltd. All rights reserved. fullhyd, fullhyderabad, Welcome To The Neighbourhood are trademarks of LRR Technologies (Hyderabad) Pvt Ltd. The textual, graphic, audio and audiovisual material in this site is protected by copyright law. You may not copy, distribute, or use this material except as necessary for your personal, non-commercial use. Any trademarks are the properties of their respective owners. More on Hyderabad, India. Jobs in Hyderabad.