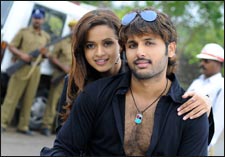 Deepa Garimella / fullhyd.com
EDITOR RATING
3.0
Performances
Script
Music/Soundtrack
Visuals
4.0
3.0
4.0
4.0
Suggestions
Can watch again
No
Good for kids
No
Good for dates
No
Wait to rent it
No
In case you noticed that Hero was released, and, by some remote possibility, you are curious about how the film is, or, in an even more freakish possibility, you are optimistic enough to give it a watch, why don't you take a hint from our rating? Or, if that is against your religious principles, why don't you take a hint from Nitin's hairdo?

And if you thought his look is cool, you need a whole new set of hints. How about 'shears', 'blades', 'Blade Babji'? If all this hint-dropping was too tough for you, we will assume you are the kind who will find Hero fun. And that was not a compliment.

Nagendra Naidu (Nagababu), a cop, gets tickled pink dreaming of his son Radhakrishna (Nitin) becoming a policeman, but his wife (Kovai Sarla) leaps about on sofas and beds, and wants him to be a movie star. Radhakrishna, meanwhile, is happy failing his exams every year, sporting huge, ugly tattoos, and not getting a haircut.

Following the home ministry's brainwave of a GO that permits any citizen to join the police force provided he or she is honest, some interesting characters saunter into the police training academy. These include a glutton with a pot-belly smaller than Nagendra Naidu's but not much (1 nos.), girls with bellies spilling out of tank tops (2 nos.), a male prostitute with his hands on his crotch (1 nos.), an over-sincere airhead Krishnaveni (Bhavana) (1 nos.), a random goon who wants to learn to wield the gun (1 nos.), Radhakrishna (1 nos.), and another goon who already has a gun hidden in every garment on his body, Brahmanandam (1 nos.).

Which leads us to the following questions that you, the discerning viewer, surely have on your mind - will the police training effect significant changes in the attitudes of these people? Will Nagendra Naidu's dreams come true? Will the GO serve its purpose? Will Nitin get a haircut?

While you enjoy their hilarious training sessions and Radhakrishna & Krishnaveni's blooming love affair, by going out to see if it's too late to buy tickets for another movie, same show, what these buffoons don't realize is that there's something deep happening around them. Krishnaveni was a key witness in the trial of the murder of an ex-official of the Anti-Corruption Bureau - in fact, she had shot a close-up of the whole scene on her mobile phone, from a distance of approximately 1 km.

A tough lady cop (Ramyakrishna) entrusts Krishnaveni's protection to the able-bodied Radhakrishna, who promptly takes her out on his bike to watch movies. More promptly, Prem Kumar (Kota Srinivasa Rao), the villain who hired a killer to carry out the murder, kidnaps her.

Radhakrishna's able-bodied-ness is not to be doubted, as he saves her from his clutches. This leads to the killer (Kapil Khanna) getting restless in jail, and threatens to expose Prem in court, leading to Prem now plotting to finish him off.

As Nagendra Naidu takes Kapil Khanna to court, the police van is van-napped and taken to an old warehouse. But Radhakrishna and his gaggle of cadets have changed into police uniforms, and arrive on the scene. There's ketchup all over the place, and the trial goes back to the court room and justice is delivered.

It is difficult to see Hero appealing to anyone, especially those who like Nitin. The lad is unkempt, unshaven, and dressed in patched-up clothes, and his tough-guy swagger is like a three-foot school-kid playing the villain on stage. Bhavana is okay, but quite good when she gets to the serious parts. Kota has a large role, but he also has this huge, unappetizing joke in which he goes into the bathroom to produce the sample for a DNA test.

A couple of songs are good, but Nitin looks worse in the songs. The visuals are decent, but how does that make them any more useful than the movie? The dialogues are tiresome, especially the parts with Nagababu and Kovai Sarla. And Nitin, Bhavana, Kota and everyone else.

Brahmanandam's scenes are a relief, but there are only a few of them. And we don't know what made Ramyakrishna decide to be a part of this, when she has hardly anything to do except wear a police uniform that does nothing for her looks.

On the whole, Hero is a good reason to check out all the other releases and have a happy Diwali.
Share. Save. Connect.
Tweet
HERO SNAPSHOT

ADVERTISEMENT
This page was tagged for
hero telugu full movie
telgu movie nutkhat hero deteils
Hero telugu movie
Hero reviews
release date
Follow @fullhyderabad
Follow fullhyd.com on
About Hyderabad
The Hyderabad Community
Improve fullhyd.com
More
Our Other Local Guides
Our other sites
© Copyright 1999-2009 LRR Technologies (Hyderabad), Pvt Ltd. All rights reserved. fullhyd, fullhyderabad, Welcome To The Neighbourhood are trademarks of LRR Technologies (Hyderabad) Pvt Ltd. The textual, graphic, audio and audiovisual material in this site is protected by copyright law. You may not copy, distribute, or use this material except as necessary for your personal, non-commercial use. Any trademarks are the properties of their respective owners. More on Hyderabad, India. Jobs in Hyderabad.