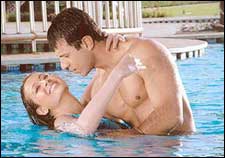 Rohit Murari / fullhyd.com
EDITOR RATING
1.0
Performances
Script
Music/Soundtrack
Visuals
NA
NA
NA
NA
Suggestions
Can watch again
NA
Good for kids
NA
Good for dates
NA
Wait to rent it
NA
It is a Friday morning - the day when an average fullhyd.com reviewer wakes up bright and early, uses the stem of the finest neem tree to brush his teeth, travels all the way to Gandipet for a morning dip, pays homage to his God, the Cheepa-taaka-dam-dam Bambose, puts on one of his two sets of clothing (the set exclusively used on this auspicious day), and steps into a movie theater with a prayer on his lips.

And he still gets to hear dialogs like this:

What would happen if he did not go through his weekly ritual? One can only shudder to think.

Since G1 cannot have B2, G1 holds a press conference in which she tells whoever is listening (which by definition consists only of those for whom there is no hope in any quarter) that they are still an item. G2, who up until now had firmly held that gossip magazines feed on the readers' primitive needs, finds this a good time to start believing in them. Not in the magazines, her primitive needs. She goes to B2's house and comes up with this gem of an outburst:

Not one to be outdone, B2 goes to G1 and mouths something more inane:

Whoever thought that the simple acts of standing up and sitting down could take such profound proportions where the female of the species are concerned?

Enough said about the script. For a model, Aryan Vaid is pretty good, and we are not comparing him to anyone in particular. Serious. Preeti Jhangiani does not get much scope to portray her acting skills but more than makes up for that by shedding her clothes and putting her tongue in Aryan Vaid's mouth, a la Negar Khan in Ab Bas... What do we say about Manisha Koirala? As we have come to expect, she has a 'grand' screen presence.

Dunno about that but standing alone at the ticket window, I am not sure how good I looked.
Share. Save. Connect.
Tweet
CHAAHAT EK NASHA SNAPSHOT

ADVERTISEMENT
This page was tagged for
chaahat ek nasha movie download
chaahat ek nasha full movie download wapsite
Chaahat Ek Nasha Full Movie HD download
chahat ek nasha full movie download
chahat ek nasha hai full movie hd download
Follow @fullhyderabad
Follow fullhyd.com on
About Hyderabad
The Hyderabad Community
Improve fullhyd.com
More
Our Other Local Guides
Our other sites
© Copyright 1999-2009 LRR Technologies (Hyderabad), Pvt Ltd. All rights reserved. fullhyd, fullhyderabad, Welcome To The Neighbourhood are trademarks of LRR Technologies (Hyderabad) Pvt Ltd. The textual, graphic, audio and audiovisual material in this site is protected by copyright law. You may not copy, distribute, or use this material except as necessary for your personal, non-commercial use. Any trademarks are the properties of their respective owners. More on Hyderabad, India. Jobs in Hyderabad.