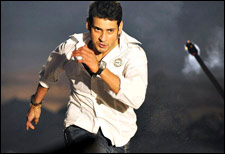 Deepa Garimella / fullhyd.com
EDITOR RATING
6.5
Performances
Script
Music/Soundtrack
Visuals
8.0
6.0
6.0
9.0
Suggestions
Can watch again
No
Good for kids
No
Good for dates
Yes
Wait to rent it
Yes
Someone we know tells us that unless you have nerves of steel, euphoria is a tricky target. Because when you miss it, things look disproportionately gloomy. So when Telugu cinema's resident chocolate boy - surfacing after what seems like a decade - is caught in a film lesser than the sum of its parts, it feels like even more of a letdown.

This, despite the fact that Mahesh Khaleja is a masterfully crafted film by many standards. It's a Trivikram product, and contains some classy comedy, visual finesse, and laboriously conceptualized scenes. Plus, needless to say, being the come-back vehicle of a superstar takes its brand value to another level altogether.

Basically, the flick's strengths seem to wane in the face of its pacing. Trivikram's laboriousness and attention to detail may have led him away from the bigger picture - a movie that isn't crisp enough, and that is slow enough to be dangerously capable of pushing more crowds into Robot's queues.

Mahesh plays the sarcastic, wise-cracking Raju, a taxi-driver who happens to unwittingly get mixed up in a case of brutal murder of two people. Since his taxi is battered in the incident, he goes to Rajasthan to claim compensation from one of the victims' families. His adventures in the desert, with a TV reporter (Sunil) and an overspoilt ditzy heroine Subhashini (Anushka), manage to baby-sit you for the first half of the flick.

On the way back home, Raju runs into a village where people have been subjected to misery so intense that they are waiting for God to help them snap out of it. Somehow, they're convinced Raju is The One, and this is where an entire slimy story is uncovered from beneath the murders Raju had witnessed.

Now Khaleja isn't a completely botched-up film, and isn't the kind to fall apart like a pack of cards. All it does is throw in unnecessary emotions into a perfectly enjoyable party, and drag the proceedings till indifference takes over.

On one hand, there is Prakash Raj playing an evil, heinous, revolting, wicked villain. On the other is an entire pack of villagers living by blind faith that Raju is God. While the latter aspect of the story lends some exotica to the script, giving Trivikram plenty of opportunity to spout philosophy, the villain's sub-plot is pretty childishly vile.

In all, these two angles kind of topple the balance of the film - which, whenever left to Mahesh and his wry wit, is actually turning out to be enjoyable fare. In addition, the violence is quite graphic, even though it comes in spurts. And in some parts, the objectionable language used makes you concerned - Mahesh Babu is an icon worshipped by even kids, and should have stayed clear of bad language, at least.

What saves the day is the brilliant humour, led by Mahesh - and deftly supplemented by Dharmavarapu, Sunil, Ali and Brahmanandam, who appear in the movie in that order. Mahesh is probably more expressive than earlier, but the film is a little too unwieldy for him to be carrying on his shoulders alone. Anushka is about as useful as a mannequin, and isn't allowed to be beyond one. Prakash Raj is more repulsive than campy.

Manisarma's music is the kind that would have caught on if it was aggressively promoted, but it wasn't, so the downloads won't be very frantic. However, the cinematography is state-of-the-art and impressive, and is in tune with Trivikram's ambition in creativity.

Anyway, for those who believe that Mahesh Babu returning from dormancy is an end in itself, Khaleja won't hurt.
Share. Save. Connect.
Tweet
KHALEJA SNAPSHOT

RATING
5
ashyd sportstar on 1st Nov 2010, 9:38pm | Permalink
Mahi rocks. The greatness in him is he does'nt repeat the same old style, changes and impresses in new roles. He is more excellent as an intnl brand ambassador.

Saradhi on 25th Oct 2010, 5:34pm | Permalink
Noble story, very badly executed. Trivikram made Mahesh's character dull. His absurd diction, awkward foul language, made the character wrong. When a person has given the credit of God, that character should behave in a dignified way. See "Baba" movie. the characterization of Rajanikanth is amazing. The combination of Anushka and Mahesh looked bad. Anushka has tremendous action capability. Director should have involved her in the story. She was there to just show some stupid comedy, little so called romance and songs. On the contrary, if director involves her with a character forcing the main lead to realize himself and change his perosonality and show dedication would be good. Certain dialogues must be delivered with an intention. Just like Rajani explains about asanas to Manisha in Baba.
A NOBLE STORY WAS SPOILED due to stupid fan criteria. Sadasiva song was very good.

Illogical_movie_goer on 22nd Oct 2010, 3:26pm | Permalink
The Athadu combo is back! Naturally expectations are huge. More-so because Mahesh, our own WillSmith, has come after a long hibernation. The movie was well-conceived and rather ill-executed, I would say. Trivikram seems to have lost his Midas touch. I am saying this because, after seeing high quality movies like Nuvve Nuvve and Athadu, both Jalsa and this one have been mediocre in the story and screenplay departments.
Mahesh has tried a new diction and new style of acting in this movie, but it seems to be over-done, especially using foul language. Comedy is his forte usually; but in this movie he seems to have given up the cool-casual one-liners that we all love him for. Anushka looked very odd as a pair with Mahesh. Shafi excelled in his role. The Siva song stands out for its music quality, the rest are not upto the mark. The hero-heroine thread is not properly conceptualized.
RATING
6
sgorantl on 20th Oct 2010, 4:46pm | Permalink
not worthfull to watch more than once
prins on 18th Oct 2010, 8:33am | Permalink
[i] well, khaleja a very good movie to watch it out....
1st half , very well taken ... with a neat and hillarious comedy and very different and talented mahesh.....
going into the 2nd half.. the half which reveals story and waz very gud one to those who understands and very well taken and directed movie with laws of life....... most of them din;t understand the story,infact they dint tried really .... my review an awesum movie to watch out for mahesh, comedy,fights and very godd story in it

and guys who have any doubt's and not satisfies with d script .. post a question ill answer ua questions

Mungalla Ramakrishna on 16th Oct 2010, 3:36pm | Permalink
I think its an average film and except One Om Namo Vittalakshaya other songs are not good


Pros: Mahesh acting skills
Cons:
Pradeep ch on 8th Oct 2010, 3:06pm | Permalink
movie has just passed through...
i was expecting something of 'okkadu' movie alike...
but turns out different ...
the movie is 'ok' overall ...
but must have been much better...
there is lot of talking done by mahesh babu in the movie unlike his prev. ones...where much emphasis was not giving to talk.
he tries to humiliate his own dialoges in the movie at times..
instead of more fighting scenes...this department culd have been con-sized little...
the theme of the script is nice...that things culd happen as predicted...or like certain things r done by certain nice people like Mahesh here...
but somewhere ..something was missing...
jokes r not so wonderful as a whole...
but.., this movie is an experiment to mahesh genre of movies unlike before.., one will not find much jokes by mahesh in before..., this movie has mahesh trying jokes...and trying to be jovial and get done feel .....
If you ask me.., i like his previous genre only....


Pros: theme of movie or script..
Cons: difficult to pin point 'cons'
raagalahari on 8th Oct 2010, 8:44am | Permalink
Mahesh Khaleja has high entertaining values. Decent audible music, mind blowing cinematography, healthy hum our, acting to the requirements, fantastic fights, romance, excellent characterization, average script n direction, narration and good climax.
Its a whole some entertainer which has reached the expectations of all the fans unanimously.
No movie can be perfect in all aspects. Even Pokiri and Athadu which were block busters, had their own negetive aspects.
I intend to motivate by appreciating the entire team of Khaleja for giving a enjoyable entertainer for all the fans of Mahesh.


Pros: Mahesh characterization
Cons: Script
gopalav5 on 7th Oct 2010, 7:57pm | Permalink
MAHESH KHALEJA is in and out a Mahesh Babu Movie and he does not disappoint his fan. He is amazing in his looks and performance through out the film in spite of a week screen play which picks pace post interval. Anoushka is a mis-fit and there is no chemistry between her and Mahesh Babu which is a deterrent for the movie. The same applies to Mani sharma's music except for one song on God Shiva and the songs just pop up for no rhyme and reason. Any way the movies is watchable only for Mahesh Babu.


Pros: Mahesh Babu
Cons: Anoushka, Mani Sharma
RATING
6
Yash on 7th Oct 2010, 7:21pm | Permalink
Seriously? You cant watch it again??
I saw the premier show. The movie is hilarious. You wont stop laughing all through the movie. I will accept the script is not upto the mark. But comedy is amazing.

All you reviewers are being harsh on the movie.
I do accept that the movie is not good for kids or people above 50. Else, it makes a awesome movie..!!

ADVERTISEMENT
This page was tagged for
hd player (mahesh khaleja movie hd t)
khaleja movie in telugu
khaleja telugu full movie
khaleja full movie in telugu
khaleja movie telugu
Follow @fullhyderabad
Follow fullhyd.com on
About Hyderabad
The Hyderabad Community
Improve fullhyd.com
More
Our Other Local Guides
Our other sites
© Copyright 1999-2009 LRR Technologies (Hyderabad), Pvt Ltd. All rights reserved. fullhyd, fullhyderabad, Welcome To The Neighbourhood are trademarks of LRR Technologies (Hyderabad) Pvt Ltd. The textual, graphic, audio and audiovisual material in this site is protected by copyright law. You may not copy, distribute, or use this material except as necessary for your personal, non-commercial use. Any trademarks are the properties of their respective owners. More on Hyderabad, India. Jobs in Hyderabad.