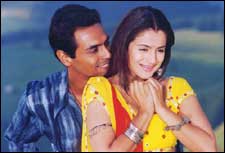 Priyanka Pulla / fullhyd.com
EDITOR RATING
3.0
Performances
Script
Music/Soundtrack
Visuals
NA
NA
NA
NA
Suggestions
Can watch again
NA
Good for kids
NA
Good for dates
NA
Wait for OTT
NA
What is it about Amisha Patel and her Mock Turtle like lugubrious expressions? What is it about her face, as droopy as a runny wax bust? What is it that makes directors cast her in joyless and mawkish love-triangles that make viewers want to burst out bawling, at the fate of the doomed heroine at least, if not her egregious acting and script?

There is so much Kaho Na Pyaar Hai deja-vu in the first half of Humko Tumse Pyaar Hai, you wonder how KNPH ever became a hit with such an offensively pedestrian story-line. Then there is Amisha Patel as Durga, a blind-girl in chiffons, whose delicately stretched fish-flesh pink lips never let you know for sure if she is smiling or crying.

She goes about the entire movie staring into the beyond like that, and you wonder why her two lovers Raj (Bobby Deol) and Rohit (Arjun Rampal) would slaver so desperately after such a leaden, unidimensional bimbette.

So potently depressing and soporific is the story of HTPH, it is better unrepeated in the company of those you care for. It is a regressive plot, in that it's a story Bollywood has drawn on many times before. But this time, the combined affect of the anachronisms and uninvolved acting turns out to be such a stinker, you are almost in physical agony tapping your feet and shifting.

Basically Rohit meets Durga, a blind girl in a village, and falls madly in love with her. Durga knows him as Babu Saab, until a jealous rival-in-love comes and murders (almost) him a day before her sight is surgically restored. She can see again, and runs into Raj, who happens to be Rohit's friend, but both of them don't know it. They fall in love. Rohit comes back. And after an hour of unrelenting dramebaazi, the chronological first-couple are united again.

All three actors are in blazing competition for the top-spot for the most phlegmatic, featureless expressions in the movie. They mumble their dialogues with as little lip-movement as a ventriloquist. They cry with the placidity of someone having a spiritual revelation. They laugh like they are trying to oblige the teller of a bad joke. And they profess their love with the slur of a tipsy boozehound.

Model Rampal's good looks, his impeccable threaded eyebrows and chiselled cheek-bones look better in posters. When he begins to act, the magic vanishes. Deol looks chubbier in his closely cropped hair, and so limited is his repertoire of expressions, he might as well be doing a cameo role. As for Amisha Patel, she doesn't disappoint, at least. We always knew how it was going to be.