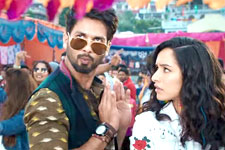 T J Reddy / fullhyd.com
EDITOR RATING
4.0
Performances
Script
Music/Soundtrack
Visuals
3.0
2.0
3.0
6.0
Suggestions
Can watch again
No
Good for kids
Yes
Good for dates
No
Wait to rent it
Yes
Batti Gul Meter Chalu's trailer told us that this would be a movie centered around three friends: smart-aleck lawyer Sushil Kumar Pant (Shahid Kapoor), budding businessman Sundar Mohan Tripathi (Divyendu Sharma) and fashion designer Lalita Nautiyal (Shraddha Kapoor). It also informed us that Tripathi's business was put in jeopardy owing to some questionable practices employed by their town's electricity board. Unable to dig his way out of his circumstances Tripathi torpedoes his way into the bottom of the Ganges by committing suicide. Nautiyal lectures Pant, and the latter mends his ways and takes on the corrupt electricity board by means of a class action lawsuit. And because this is a crowd-pleasing commercial film, we know the outcome of the lawsuit well in advance. The film's trailer establishes this narrative in 3 minutes flat.

Why, we ask the makers of this film, does your cinematic offering have a runtime of nearly three hours? And why does it take the film nearly two hours and fifteen minutes just to cover the plot beats shown in the trailer?

The makers may respond to our very valid queries by saying "Look at the clever metaphors we depict using our ancillary characters Vikas and Prakash. Feast your eyes on a never-ending love triangle. And please drop a quick glance at our crafty character names: Sundar, Sushil and Nauti (naughty). You have to pay extra for this degree of astute writing."

To that, we as an audience can collectively say, "Been there, done that. And can we get to your overly-simplified point already?"

Batti Gul Meter Chalu is the cinematic version of the anti-smoking ad that appears before every film. Akin to the advert, it lacks nuance, balance and a three-dimensional take on the matter at hand. To truly understand what we mean by that, let's compare this film with Oke Okkadu. While the latter had narrative conveniences of its own, it knew that it was a work of fiction that attempted to mirror the state of a dysfunctional system spanning the breadth from citizen to leader. When the movie asks its minor characters to demand a bill when paying for goods and services and subsequently explains why demanding said bill is essential for their benefit, it poses a question to the audience. It makes them active parts of the narrative simply because it employs the viewer to re-evaluate the choices they make on a daily basis. It asks us if we are being good citizens before we accuse others of taking advantage of our naivete.

Batti Gul Meter Chalu has no such nuance about proceedings. It fails to engage an audience in any shape or form because it is hell-bent on telling them just what they want to hear. Poor people are good. Rich people are evil. And mostly because the former are the ones buying tickets, and the film does not intend on offending them in any way.

While we do concede that social systems and cinematic narratives are often biased to favour a certain set of people and recognisable tropes respectively, all we ask for is a nuanced take on why this phenomenon occurs. But as we have established, nuance is not the primary priority where the film's narration is concerned - or even its performances. Shahid Kapoor tunes out his inner Kaminey and turns up the Shandaar to eleven as he delivers a performance that would be acceptable if he were playing a cartoon character from the '50s. He is a man who is either HAPPY or SAD or CALCULATING or RIGHTEOUS. The capital letters with which these emotional states are written in our review is but a frail attempt from our end to do justice to this over-the-top performance.

Shraddha Kapoor is present merely to offer up a long-winded romantic track in the first half and nothing more than a few lines in the second. She is wholly inconsequential to the movie's cause, and the movie treats her as such during the final hour - exit one female character and enter Yami Gautam. The latter is a highly educated and decorated lawyer who gets creamed at every turn by a man who took seven and half years to complete his law degree from a local college. The dynamic Gautham and Kapoor share robs the film of any tension, and converts a serious courtroom drama into a sitcom laden with pornographic books, wild cheering and theatrics, and a judge whose only character trait is that she is a fan of cricket.

Divyendu Sharma looks as defeated as the audience in every scene he is in, and the music scoring his journey does him no favours. The SAD music plays over his plights, the PEPPY music plays over SK's antics, and everything in between plays well before a scene conveys its intended message to the audience. The locales of Uttarakhand look gorgeous, though. We've decided where to embark on our next vacation.

And that is this film in a nutshell. A beautiful visage compensating for a lack of ambition. Underachievement at its laziest.

While teaching the basics of law to some aspiring advocates, SK says that the primary goal of a lawyer should be to make money. We have it on good authority that the filmmakers took this advice to heart. However, we suggest that our readers take another piece of SK's advice by making smart choices when it comes to their consumption of electricity, time and money before deciding to invest all three on this film.
Share. Save. Connect.
Tweet
BATTI GUL METER CHALU SNAPSHOT

ADVERTISEMENT
This page was tagged for
Batti Gul Meter Chalu hindi movie
Batti Gul Meter Chalu reviews
release date
Shahid Kapoor, Shraddha Kapoor
theatres list
Follow @fullhyderabad
Follow fullhyd.com on
About Hyderabad
The Hyderabad Community
Improve fullhyd.com
More
Our Other Local Guides
Our other sites
© Copyright 1999-2009 LRR Technologies (Hyderabad), Pvt Ltd. All rights reserved. fullhyd, fullhyderabad, Welcome To The Neighbourhood are trademarks of LRR Technologies (Hyderabad) Pvt Ltd. The textual, graphic, audio and audiovisual material in this site is protected by copyright law. You may not copy, distribute, or use this material except as necessary for your personal, non-commercial use. Any trademarks are the properties of their respective owners. More on Hyderabad, India. Jobs in Hyderabad.