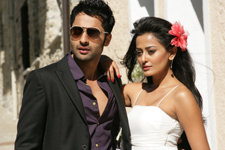 Ravi Kandala / fullhyd.com
EDITOR RATING
4.0
Performances
Script
Music/Soundtrack
Visuals
5.0
5.0
4.0
4.0
Suggestions
Can watch again
No
Good for kids
Yes
Good for dates
No
Wait for OTT
Yes
Remakes of South Indian films are doing roaring business in the North. And if you thought only movies starring southern superstars are remade, think again. While the Salmans and Aamirs of the world choose movies of bigger stars down south, the Jacky Bhagnanis are left with Allari Naresh flicks to choose from. But not a bad idea, especially when the flick that is being remade, Seema Tapakai, was a hilarious roller-coaster ride that also set the cash registers ringing.

Coming to the Hindi version, this is the story of Rajveer Grewal (Jacky Bhagnani), the heir apparent to the automobile empire of Yashwardhan Grewal (Darshan Jariwala). Rajveer falls in love with Madhuri (Nidhi Subbaiah), a student of the National Institute of Social Studies (???). Madhuri, inexplicably, completely hates rich people and believes that all rich people are idiots.

How Rajveer and his entire family connive to convince Madhuri that they are poor, and how the couple come together, forms the rest of the plot. The plot also involves Madhuri's twin brothers Karan and Arjun (Arjun Rampal).

The movie starts off with Rajveer showing off his DC (Dream Car) and his mom talking about her DB (Dream Bahu). The DC is a car that can compete with any other car in the world and is available for a price of just Rs. 25 lakhs. And it is designed by Rajveer, who presents it to the press, wearing mechanic coveralls fashionably buckled over just one shoulder. If this does not give you an inkling of what the rest of the movie is going to be like, well, you deserve to enjoy this one.

The movie is distinctly unfunny, and has a completely staged quality to it. The number of reaction shots of each person in the frame that the director puts in makes you suspect that he directed television serials once upon a time. The build-up to a lot of scenes makes you think something funny is going to happen, but the jokes fall flat - sometimes due to bad writing, and a lot of times due to poor acting. It is especially a letdown if you have seen the Telugu version - after all, you do not expect so much to be lost in translation.

The only thing going for the Ajab Gazab Love is a few genuine laughs brought in by Darshan Jariwala, and Arshad Warsi in a cameo. Jacky Bhagnani is a decent actor, but he has a long way to go before he can pull off even a regular leading man's role. He is wooden during the sentimental scenes of the film, and also needs to make his dances look effortless. Nidhi Subbaiah gets a fairly good role, and acquits herself well, though she is quite OTT in the first few scenes. Kirron Kher and Arjun Rampal deliver in whatever little scope they have.

Sanjay Gadhvi's love for automobiles was first showcased in Dhoom, with its variety of bikes, and this movie must have seemed like the perfect excuse for him to show off his love for cars. The DC is shown in such loving detail that you almost expect a price tag and a caption to pop up at the end of the cutaway shots. All the characters in the movie move around in Bentleys, Range Rovers and other such top-of-the-line cars, and many a precious minute is dedicated to showing these beauties off.

The basic premise of the movie lends itself to some great comic situations, but the director clearly did not say "Cut" enough, as most scenes go on for way too long. The songs, with the exception of Boom Boom, which is a chartbuster, are speed-breakers that are set in exotic foreign locales. And Jacky Bhagnani's "eight-pack" is not tested to the slightest, as the movie has no action scenes at all.

Overall, the DCs and DBs in the movie might lead you, out of sheer boredom, to utter a few similar abbreviations yourself. If a laugh is what you need, you have better options in town than this one.

PS: A trailer of Jacky's next, Rangrezz, was screened during the interval - and even this one is a remake, this time of Shambho Siva Shambho.
Share. Save. Connect.
Tweet
AJAB GAJAB LOVE SNAPSHOT 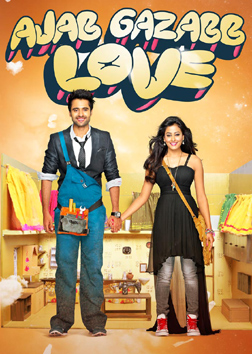 ADVERTISEMENT
This page was tagged for
ajab gajab love 500 mb movie
Ajab Gajab Love hindi movie
Ajab Gajab Love reviews
release date
Jacky Bhagnani, Nidhi Subbaiah
Follow @fullhyderabad
Follow fullhyd.com on
About Hyderabad
The Hyderabad Community
Improve fullhyd.com
More
Our Other Local Guides
Our other sites
© Copyright 1999-2009 LRR Technologies (Hyderabad), Pvt Ltd. All rights reserved. fullhyd, fullhyderabad, Welcome To The Neighbourhood are trademarks of LRR Technologies (Hyderabad) Pvt Ltd. The textual, graphic, audio and audiovisual material in this site is protected by copyright law. You may not copy, distribute, or use this material except as necessary for your personal, non-commercial use. Any trademarks are the properties of their respective owners. More on Hyderabad, India. Jobs in Hyderabad.