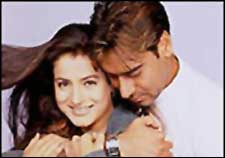 Rohit Murari / fullhyd.com
EDITOR RATING
1.0
Performances
Script
Music/Soundtrack
Visuals
NA
NA
NA
NA
Suggestions
Can watch again
NA
Good for kids
NA
Good for dates
NA
Wait to rent it
NA
When you wake up on a Friday morning as a fullhyd.com reviewer, you know what providence has in store for you. Sometimes, though, you are surprised by the sheer back-flip that fate performs. You go into the theater expecting an absolutely useless movie. You come out having seen much worse than you had expected.

Suraj Chauhan (Ajay Devgan) is a lecturer in a women's college who gets off by having his students develop crushes on him. Especially if the student in question is Pooja (Amisha Patel) who lives in his saamne waali khidki. That is not to say that she lives in the window per se. She lives in the house that has the window, duh!

Since no rational angle of a teacher-student romance has been left unexplored, not just by Sleazy Movies International but also Bollywood, the makers come up with an irrational one involving Suraj's fiance, Supriya (Mahima Chaudhary). It must be pointed out, however, that Sleazy Movies International does a much better job, ummm, handling such a 'tri'cky and 'tri'angular setting.

Anyhoooooo, the deal is that Supriya suffers from brain tumor. In fact, she has been suffering from brain tumor ever since she read the script. A few minutes into the movie, the screenplay gives her a paralytic stroke. However, when the incessant chirps of Pooja reach a crescendo she decides to come out of her paralysis for no reason other than the run-away-from-Pooja ability it provides her with.

Her journey on the road to recovery meets with a speed-breaker when Pooja tells her that Suraj feels nothing but sympathy for her. This has Supriya grossly enraged. What does Pooja know? Hell, she does not even know that the word to be used was empathy and not sympathy.

Supriya gets Pooja married to Suraj. This ought to teach Pooja a lesson, she thinks. Three years she spent with Suraj without ever coming to know what his facial expressions conveyed, even if they were perpetually wooden. And this kal ki chokri claims to understand them?

Post-marriage, Pooja is unable to bear the trauma. No, not of calling Supriya names but of not being able to decipher any of Suraj's expressions. She tells him in so many words that she was the one responsible for Supriya's current paralytic state (yes, Supriya slips in and out of this with the ease of convenience only afforded to established names in Hindi cinema).

Unable to decide what his next facial expression should be, he gives Pooja a whack on the face and leaves. This is where his friend, Dildar (Shakti Kapoor), decides that he has not had enough screen time, and embarks upon a mission to bring him back. It takes him five years to do it during which time much has been lost, most of it being your time.

From the looks of it, the movie appears to be one that the lead actors signed during their days of Bollywood infancy. The direction is tacky, the sets impoverished, and the screenplay boffo. The actors just go through the motions, and the music should not ideally come under the definition of the word.

Just one word of caution. If while watching the movie you hear a grugllehurrpleshlurrplle (which is the sound a human body makes when it hits a still body of fresh water from a height of exactly three hundred and thirty-three feet), don't panic. It is probably you wallowing in the tears of your frustration.
Share. Save. Connect.
Tweet
ZAMEER SNAPSHOT

ADVERTISEMENT
This page was tagged for
Zameer hindi movie
Zameer reviews
release date
Ajay Devgan, Mahima Chaudhary
theatres list
Follow @fullhyderabad
Follow fullhyd.com on
About Hyderabad
The Hyderabad Community
Improve fullhyd.com
More
Our Other Local Guides
Our other sites
© Copyright 1999-2009 LRR Technologies (Hyderabad), Pvt Ltd. All rights reserved. fullhyd, fullhyderabad, Welcome To The Neighbourhood are trademarks of LRR Technologies (Hyderabad) Pvt Ltd. The textual, graphic, audio and audiovisual material in this site is protected by copyright law. You may not copy, distribute, or use this material except as necessary for your personal, non-commercial use. Any trademarks are the properties of their respective owners. More on Hyderabad, India. Jobs in Hyderabad.