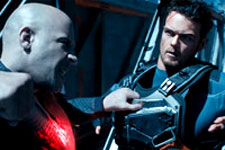 Kritika Deval / fullhyd.com
EDITOR RATING
4.5
Performances
Script
Music/Soundtrack
Visuals
5.0
4.0
6.0
4.5
Suggestions
Can watch again
No
Good for kids
No
Good for dates
No
Wait to rent it
No
Valiant hunk of American man-meat (Vin Diesel) comes back home from being valiant in the Middle East, bones blonde and leggy wife, gets murdered alongside said wife, and then wakes up on an examination table with no memories. If this sounds familiar, it's probably because you've heard this story a thousand times.

Turns out, our hero, let's call him Vin Diesel, has been resurrected by mad scientist / megalomaniac Dr. Harting (Guy Pearce) with the help of high-tech nanobots that make him an even better hunk of American man-meat. Imagine if Iron Man on Extremis (the comic book version) had a baby with Deadpool and the Winter Soldier. There's probably fan-fiction with this premise somewhere out there. It would probably be more entertaining than this version where a real life troglodyte who can only communicate in small sentences persistently tries to stop bigger and badder obstacles with his person in the name of what can only hypothetically be called a plot.

It goes thusly. Vin Diesel wakes up to no memories and Harting monologuing super-villain style about his army of indestructible soldiers made so by his army nanobots, and how Diesel is now big and stronk, and can heal instantly and can never ever die. He trains with fellow big and stronk zombies, remembers his fridged wife, and then goes off script to kill her killers. Or does he, in fact, go off script? Is there more to the very obviously skeevy doctor with the God complex? The character whose name we cannot be bothered to google has too little room in his brain pan to wonder about any of these things because he's too busy making soylent.

The thing is, nobody goes to watch a Vin Diesel film for intellectual stimulation. You go in there to laugh at stupid jokes and be wowed by people (Vin Diesel) with big muscles punching away their problems in a variety of entertaining ways. Bloodshot is exactly this but with all the fun taken out, because it makes you, the viewer, feel like about as much of a utility as the hero of this film supposedly is. Just like the main character, Bloodshot reads like many, many superhero blockbusters dumped into a blender and poured out onto film for the sole purpose of making many monies. It escapes being classified as a ripoff by the sole virtue of having ripped off too many films.

The set up takes a hot minute, and the rest of your time in the theatre is occupied by one choppy, loud, abrupt fight sequence after another working you into a fugue state from which you are sometimes awakened by even louder noises, and the occasional attempt at smashing third-wall into smithereens. And then the movie ends. With sequel-bait.

The acting is all way over the top to signal a particular kind of self-awareness that this film does not have the skill to execute. So you end up with Vin Diesel seeming like his own caricature and Guy Pierce playing a character that seems like Mandark all grown up.

The CGI is entirely unspectacular, and is constantly undermined by editing that appears to be working overtime on giving you a headache.

Stay at home. Watch Fast & Furious reruns. Wash your hands. This is not the movie to brave crowds for.
Share. Save. Connect.
Tweet
BLOODSHOT SNAPSHOT 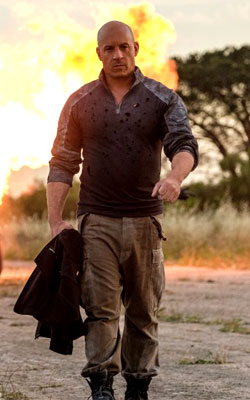 ADVERTISEMENT
This page was tagged for
Bloodshot english movie
Bloodshot reviews
release date
Vin Diesel, Eiza González
theatres list
Follow @fullhyderabad
Follow fullhyd.com on
About Hyderabad
The Hyderabad Community
Improve fullhyd.com
More
Our Other Local Guides
Our other sites
© Copyright 1999-2009 LRR Technologies (Hyderabad), Pvt Ltd. All rights reserved. fullhyd, fullhyderabad, Welcome To The Neighbourhood are trademarks of LRR Technologies (Hyderabad) Pvt Ltd. The textual, graphic, audio and audiovisual material in this site is protected by copyright law. You may not copy, distribute, or use this material except as necessary for your personal, non-commercial use. Any trademarks are the properties of their respective owners. More on Hyderabad, India. Jobs in Hyderabad.