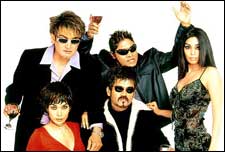 Rohit Murari / fullhyd.com
EDITOR RATING
3.0
Performances
Script
Music/Soundtrack
Visuals
NA
NA
NA
NA
Suggestions
Can watch again
NA
Good for kids
NA
Good for dates
NA
Wait to rent it
NA
Padmasree Laloo Prasad Yadav would have been a good movie if the Honorable Minister for Railways had been in it for more than his special appearance. It has to be said that he alone could give all its stars a run for their money.

A frame by frame, and then some, replica of "A Fish Called Wanda" the movie very deftly defies all stereotypes in Bollywood, even those of expectations that a big movie brings with itself. It starts off well, and then reaches a new high - when it falls face first on the ground.

Not to be confused with the man, Laloo (Suniel Shetty - after two indigestible movies in a week it might not be a bad idea for him to revert to his earlier spelling) is the right hand man of Tommy (Sharat Saxena), Mumbai's most feared underworld don. He is in love with Padmasree (Masumeh). And, irrespective of what you are told, there is nothing between him and other women, not even a sheet.

Just so they could go to South Africa, Padmasree has some uncle who swindled from his dad diamonds worth Rs. 50 crore. Johnny (Gulshan Grover) and his sidekick, Yadav (the inimitable Johnny Lever), abet them in robbing the diamonds from a bank. Johnny goes to jail, which introduces to us Prasad (Mahesh Manjrekar).

Technical glitches like the one above apart (seriously, if you look for editorial continuity in Hindi cinema you need to get a life), the movie lacks in one very fundamental aspect of movie-making. It is called a script, and it needs to be especially great if you are attempting comedy. One hardly attributes any acting credentials to Suniel Shetty but that does not mean that he would not even deliver that. For a newcomer, Masumeh is good. She is cute, too, and that never hurts. The background score is like-able, although it is a bit on the loud side.

A last bit of observation. Is this really a Mahesh Manjrekar movie or one that is ghost-directed? If it is not ghost-directed, then were his previous movies made that way?
Share. Save. Connect.
Tweet
PADMASHREE LALOO PRASAD YADAV SNAPSHOT

ADVERTISEMENT
This page was tagged for
Padmashree Laloo Prasad Yadav hindi movie
Padmashree Laloo Prasad Yadav reviews
release date
Suniel Shetty, Johnny Lever
theatres list
Follow @fullhyderabad
Follow fullhyd.com on
About Hyderabad
The Hyderabad Community
Improve fullhyd.com
More
Our Other Local Guides
Our other sites
© Copyright 1999-2009 LRR Technologies (Hyderabad), Pvt Ltd. All rights reserved. fullhyd, fullhyderabad, Welcome To The Neighbourhood are trademarks of LRR Technologies (Hyderabad) Pvt Ltd. The textual, graphic, audio and audiovisual material in this site is protected by copyright law. You may not copy, distribute, or use this material except as necessary for your personal, non-commercial use. Any trademarks are the properties of their respective owners. More on Hyderabad, India. Jobs in Hyderabad.