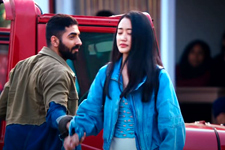 Punarvasu Pendse / fullhyd.com
EDITOR RATING
6.0
Performances
Script
Music/Soundtrack
Visuals
7.0
5.0
6.0
8.0
Suggestions
Can watch again
No
Good for kids
No
Good for dates
No
Wait for OTT
Yes
Anek begins with the movie's title being only partially shown on the screen with the letters "NE" appearing first, then being flanked by the A and the K to form Anek. The viewer is immediately made aware that this is a film about the Northeast (of India), a part of the country that has historically had tumultuous relationships with the mainland.

Director Anubhav Sinha wades into uncharted territory with Anek, despite being no stranger to making hard-hitting movies about sensitive topics such as communalism, sexism and misogyny. Anek is a movie that tries to present a nuanced portrayal of the conflict in Northeast India, but it also tries to shine a light on the struggles that the people from the Northeast face on a daily basis - particularly when dealing with mainlanders or while living/travelling in mainland India.

Joshua (Ayushmann Khurrana) is an undercover agent stationed somewhere in the Northeast, under orders to facilitate the creation of the Indian government's peace accord with major separatist leader Tiger Sanga (Loitongbam Dorendra Singh). It is also the story of Aido (Andrea Kevichüsa), a boxer who dreams of representing and winning medals for India on the global stage - while harbouring a hope that her success would amplify her voice and allow her to open a dialogue with the government.

Things start to get hairy when another group led by the mysterious "Johnson" opposes the peace accord, and violence threatens to engulf the local villages who covertly support the upstart usurper. With increasing pressure to act by his superior officer Abrar Butt (Manoj Pahwa), Joshua races against time to contain events that have been set into play by his own actions.

Anek is a very confused movie, and that in turn makes it thoroughly confusing for the casual viewer. Sinha, in trying to do justice to all the varying elements in his story, ends up with a movie that feels like it is neither here nor there. There are some wonderful simultaneously running narratives - a young woman's internal struggle with walking a different path than her father when they both have the same end goal of making their voice heard, a mother working with external forces who promise to protect her son, and a young boy's slow and troubling path towards picking up a weapon when thrust into armed conflict - but it never quite feels like they all coalesce into one connected whole. Politically, too, the film feels like it takes the safe way out at the end, despite diving into some confrontational truths about what it means to be an Indian. To its credit, the film fiercely tries to avoid blaming separatist elements as terrorists, trying to portray every faction in a nuanced manner.

At times, though, Anek feels like a cynical, hard-hitting look at politics in states where "special" acts have been enforced. It asks honest questions - does the political machine want peace, or simply a peace accord? Is peace truly achievable when war is often the more profitable way? What makes some Indians need to prove something to show their "Indian-ness"? Alas, just when you think it will tackle some of those questions - we get dialogue baazi from the likes of Joshua or Abrar.

What make Anek worthwhile are the performances. Ayushmann Khurrana has made a career playing characters that make the audience question their own thoughts and beliefs - and he is extremely comfortable playing undercover agent Joshua. Perhaps a tad too comfortable, as it feels like his character lacks the X factor. Andrea Kevichüsa is wonderful as champion boxer Aido, but she is woefully underutilised, and her character's internal conflict should have been explored more.

Manoj Pahwa can do serious as well as he can do comedy, and his character's symbolic nature has been brought out very well by the veteran actor. Kumud Mishra and J D Chakravarthy have equally small roles, but it feels like the latter has been hard done by. A special mention to the supporting cast, most of whom are from the region. Loitongbam Dorendra Singh's and Mipham Otsal's characters particularly feel effortless and genuine.

Ewan Mulligan's cinematography is gorgeous - we get bird's eye views of lush, fertile fields that quickly fade into thatched huts and narrow lanes as violence always looms on the periphery. We get young people singing in the fields as the camera looks into their eyes, and we see these songs being replaced with cries of despair as the bloodshed invades these idyllic villages. It is truly haunting at times, further amplified by Mangesh Dhakde's score. The music is rousing but hardly ever loud, and song-and-dance sequences are thankfully absent.

Anek is a beautifully shot film about a very real topic that most Indians are often clueless about. What lets it down is its reluctance to flesh out its storylines, instead settling for a middle-of-the-road approach that shies away from taking a stand. Still, worth a watch to understand Northeast India, especially when we can't think of a single mainstream film that does so.
Share. Save. Connect.
Tweet
ANEK SNAPSHOT 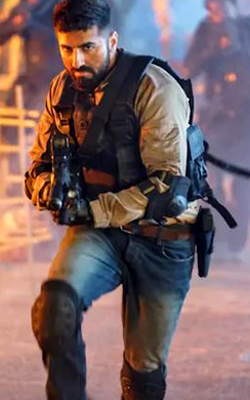 ADVERTISEMENT
This page was tagged for
Anek hindi movie
Anek reviews
release date
Ayushmann Khurrana, Andrea Kevichüsa
theatres list
Follow @fullhyderabad
Follow fullhyd.com on
About Hyderabad
The Hyderabad Community
Improve fullhyd.com
More
Our Other Local Guides
Our other sites
© Copyright 1999-2009 LRR Technologies (Hyderabad), Pvt Ltd. All rights reserved. fullhyd, fullhyderabad, Welcome To The Neighbourhood are trademarks of LRR Technologies (Hyderabad) Pvt Ltd. The textual, graphic, audio and audiovisual material in this site is protected by copyright law. You may not copy, distribute, or use this material except as necessary for your personal, non-commercial use. Any trademarks are the properties of their respective owners. More on Hyderabad, India. Jobs in Hyderabad.