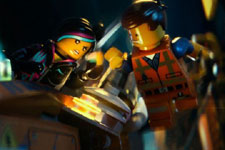 Kritika Deval / fullhyd.com
EDITOR RATING
9.0
Performances
Script
Music/Soundtrack
Visuals
8.0
9.0
8.0
10.0
Suggestions
Can watch again
Yes
Good for kids
Yes
Good for dates
Yes
Wait to rent it
No
When you open a box of LEGOs, you have two options. You either stick to the instructions, and make something orderly and perfect. Or, you toss the same instructions into the dustbin, and create something awesome. That's the supreme battle in what is easily the best animated movie this year so far, and we'll eat our shoes if that's not so by the end of the year.

It isn't just that the combination of stop-motion and CGI is so mind-bendingly perfect, or the astonishing attention to detail, or the tongue-firmly-in-cheek humour, or the insane music or the insane-er plot, or any of the other usual things that make for an inarguably good movie. The thing is, The LEGO Movie is so matter-of-fact and straight-faced in its subversive humour that it takes you a few seconds to get the joke, and then you find yourself on the floor laughing.

The plot? Lord Business (Will Ferrel) is a man who likes order in all things. When he finds that popular music that tells them that team-work is the way to go, instruction manuals on how to lead lives, and owning pretty much everything people buy still doesn't quite squash out the need among people to do things their own way instead of his, he decides to use the Kragle, a machine that will stop the LEGO world in its tracks and keep it exactly the way he wants it.

Wizard Virtuvius (Morgan Freeman) is a MasterBuilder, one of several special individuals who prize their individuality and spend time creating and coming up with "ideas". Upon uncovering this plot, he lets loose "The Piece Of Resistance", and prophecies that one day, a man - the most fascinating, interesting and creative man ever - will find it, and with it stop The Kragle, and will come to be known as The Special.

That day has come, and the man is Emmet Brickowski (Chris Pratt), the LEGO world equivalent of John Smith. He sticks to his instruction manual like he's been Kragle-d to it, he cracks up to the popular popular show that everybody watches, i. e., "Honey! Where Are My Pants?!?", he listens to the song everyone listens to ("Everything is awesome?"), roots for the local sports team with everybody else ("Goooooo Sports Team!"), drinks overpriced coffee, and does everything it takes to fit into the LEGO framework. So much so that when President Business aka Lord Business in another universe (President of the world and of Octan Corporation) admits to putting the world to sleep in a speech, Emmet, along with the rest of the normal people, gets easily distracted by the "funny" show, the "awesome" music and the "great" conversation, and forgets all about it.

So, imagine his surprise when, one day, he finds a strange glowy red piece calling him to touch it, and when he does, a crazy beauty called Wyldstyl starts calling him The Special and expecting him to create things and get ideas! And without an instruction manual, to boot! So, now, Wyldstyl (Elizabeth Banks), Vitruvius and other MasterBuilders including (this is the best part!) Batman (Will Arnett), Uni-Kitty (a weird mix of Hello Kitty and a unicorn, played by Alison Brie), Benny (a "1980-something space guy", played by Charlie Day), Superman (Channing Tatum), Wonder Woman (Cobie Smulders), Green Lantern (Jonah Hill), C-3PO (Anthony Daniels) (also, we're not kidding, they absolutely are) and the list goes on.

And then, sh** gets weird, man. Emmet has to show everyone that he absolutely can have useful ideas, like a double-decker couch (you sit on top and you'll get a crick in your neck trying to watch the TV, you sit at the bottom and the legs hanging from the top will block your view). He goes from universe to universe getting highly individualistic MasterBuilders to work together. Han Solo shows up somewhere in the middle. We think we saw William Shakespeare. Ooh, and Gandalf and Dumbledore show up too.

If we're not wrong, there's a rap song in there somewhere, and a toffee for anybody who finds it.

You think we've said too much about the film? People, we haven't even begun. This two-hour flick packs in so much detail the book would be a thousand pages easy. The subversive humour we were talking about? It isn't as much a set of sneaky jokes as it is a whole bunch of LEGO pieces that are being put together a piece at a time. In fact, the whole plot works that way. The whole thing unravels in one acid-trip of a layer after another, and all you can do is watch, giggling helplessly like a kid attacked by Tickle Monster.

And when it all comes together in an ending so obvious yet astonishing, you wonder why you didn't think of it yourself.

And now for the graphics, so lovingly and painstakingly created. For those not in the know, stop-motion motion is exactly what it sounds like - you stop motion for an instance to create an image, and then you create another and then another and another, and hundreds of images later you have enough images worth a minute of footage. The LEGO Movie was created using a mixture of stop-motion and CGI, with more stop-motion and less CGI, to make everything look like LEGOs, water, waves, fire, collisions - it is all of your childhood imagination come to life. When these guys want a LEGO ocean, they make it from scratch, and not on the computer.

As for the music, you cannot not pay attention to Marks Mothersbaugh's (teehee) various auditory weirdnesses, and we dare you to not have "Everything Is Awesome" ringing in your head for at least two days after you've seen the movie.

The LEGO Movie is exactly what the kid in you craves. Give up and go watch it. And don't forget to pick up a set for yourself on your way home.
Share. Save. Connect.
Tweet
THE LEGO MOVIE (3D) SNAPSHOT 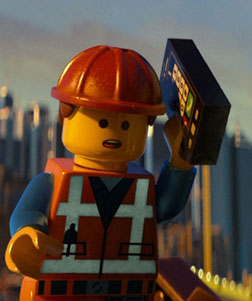 ADVERTISEMENT
This page was tagged for
jack the giant slayer full movie hindi dubbed
The Lego Movie (3D) english movie
The Lego Movie (3D) reviews
release date
Will Arnett - Bruce Wayne (voice), Elizabeth Banks - Lucy (voice)
Follow @fullhyderabad
Follow fullhyd.com on
About Hyderabad
The Hyderabad Community
Improve fullhyd.com
More
Our Other Local Guides
Our other sites
© Copyright 1999-2009 LRR Technologies (Hyderabad), Pvt Ltd. All rights reserved. fullhyd, fullhyderabad, Welcome To The Neighbourhood are trademarks of LRR Technologies (Hyderabad) Pvt Ltd. The textual, graphic, audio and audiovisual material in this site is protected by copyright law. You may not copy, distribute, or use this material except as necessary for your personal, non-commercial use. Any trademarks are the properties of their respective owners. More on Hyderabad, India. Jobs in Hyderabad.