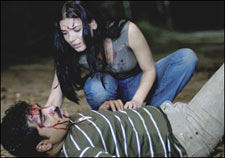 Deepa Garimella / fullhyd.com
EDITOR RATING
5.0
Performances
Script
Music/Soundtrack
Visuals
8.0
5.0
8.0
8.0
Suggestions
Can watch again
No
Good for kids
No
Good for dates
No
Wait for OTT
Yes
Three is a film that labels itself "thriller" as opposed to "horror". Sure, it is not classical horror, or in-your-face horror, because there really are no ghosts, no ugly faces, and no blood-stains on pillows. There are instead a lot of hallucinations, eerie stares, a past-life explanation, and great camera work and sound effects. Only, all of these still qualify it for the horror genre, rather than as a thriller.

And for the benefit of those who must be thinking there is some kind of psychological suspense involved, the sad truth is that there are no mind games here. The "psychology" aspect is limited to terms like "schizoprenia" and "regression therapy".

Nisha (Urvashi Sharma) is tormented with death threats by voices in her head that claim to be Shankar, and confides in her neighbour Sriram (Rishi), who brings in a nutty psychiatrist (Harshavardhan) to the scene. Her rattled condition is dismissed as schizoprenia.

However, Nisha is convinced she is hearing the Shankar who was a tourist guide at an island she visited a few months ago, but who she barely knew. Deciding to get to the bottom of things, the trio reluctantly drive over to the creepy island that is covered with creepy vegetation, and check into a creepy guesthouse with a creepy caretaker.

After searching high and low for Shankar, and after an encounter with a local goon, they learn that Shankar is dead. Sriram, who decides he has had enough of helping out a hallucinating girl and getting beaten up by thugs in return, packs his bags to leave, when Shankar (Santhi Chandra) appears.

And that's not the scary part of the story, because Shankar is alive and kicking and in love with Nisha, and is not a ghost. The trouble really starts when Nisha insists this is not the Shankar whose voice agonizes her, and when she starts seeing the owner of the voice (Rajiv Kanakala) - something that haunts only her, for now at least. Events are explained towards the end, when a regression-therapy session uncovers an incident from an earlier life.

The suave Rishi is good as the cynical Sriram, whose character has an escapist angle that comes across in the umpteen times he wants to back off from trouble. However, the role has some character-building that leads nowhere, whether it is his job as a wildlife photographer with National Geographic or it is his being dumped by his girlfriend. Urvashi Sharma as the anguished Nisha, is pale enough to be spooky all by herself.

Rajiv Kanakala gets to be the scariest of them all, even when he is not painted white and placed in horrifyingly unlikely places (like climbing up a wall, for instance). Every conversation, however harmless, that involves Kanakala, is signed off with a menacingly sinister glare or an equally macabre grin - that only the audience can see.

The music is the real hero of the film - partly aided by the absence of visual horror. The music director has quite some fun with cues like the eerie build-up of notes and the long, deep tones that create an ominous tension - they always work. The camera work is of the kind and quality used by Ram Gopal Verma. Taken together, the music and the brooding visuals are so effective that even when a scene shows a perfectly placid lake, you expect a Loch Ness monster to leap out of it and wreck chaos.

And maybe that is why the movie does not call itself a horror film - there are no unearthly beings out there; the human mind is scary enough without them. For those who derive thrills out of the chills, this film is good to watch. For those looking for brainy suspense, there is not much.
Share. Save. Connect.
Tweet
THREE SNAPSHOT

ADVERTISEMENT
This page was tagged for
Three telugu movie
Three reviews
release date
Rajiv Kanakala, Urvashi Sharma
theatres list
Follow @fullhyderabad
Follow fullhyd.com on
About Hyderabad
The Hyderabad Community
Improve fullhyd.com
More
Our Other Local Guides
Our other sites
© Copyright 1999-2009 LRR Technologies (Hyderabad), Pvt Ltd. All rights reserved. fullhyd, fullhyderabad, Welcome To The Neighbourhood are trademarks of LRR Technologies (Hyderabad) Pvt Ltd. The textual, graphic, audio and audiovisual material in this site is protected by copyright law. You may not copy, distribute, or use this material except as necessary for your personal, non-commercial use. Any trademarks are the properties of their respective owners. More on Hyderabad, India. Jobs in Hyderabad.