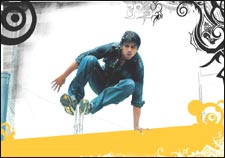 Deepa Garimella / fullhyd.com
EDITOR RATING
5.0
Performances
Script
Music/Soundtrack
Visuals
8.0
5.0
10.0
9.0
Suggestions
Can watch again
No
Good for kids
Yes
Good for dates
Yes
Wait to rent it
No
The thing about having a protagonist with short-term memory loss is, whatever else happens to the plot, it is intriguing enough to watch his character unfold. So, while it is tricky to take care of details (he doesn't know his name but remembers the way to his office), it is still allright because the whole situation is, in a spooky way, fascinating.

Nenu Meeku Telusa knows it, and it chooses to focus on just building a character for you to watch. There is a plot, too, but it is not quite as exciting as you would expect.

Nenu Meeku Telusa is a thriller-comedy revolving around Aditya (Manoj), who suffers from short-term memory loss. His memory gets wiped out after every night's sleep, and he has an audio-cassette of his own voice to remind him of his state of affairs, every morning. Aditya is the MD of the SS Group of Companies, but his condition being what it is, his uncle (Nassar) takes care of the business on his behalf while Manoj poses as just another employee at the company.

Madhumita (Riya Sen), Aditya's achingly gorgeous sweetheart, is also the VP of his company, and a few other colleagues are played by Brahmanandam, Sunil and Uttej, adding comic relief to what is essentially a thriller. Prominent among them is Brahmanandam as Barmani, a quirky, tic-sporting fashion designer obsessed with hemlines and - if you didn't guess it already - Armani. Also in the picture is police officer Anjali (glass-faced, Ash-lookalike Sneha Ullal), who happens to be Aditya's ex-girlfriend.

At the crux of the tale is Aditya stuck with an accusation of murder. Rendered repeatedly helpless by his memory lapses, he soon decides to take charge of matters. Who is the murderer? What was the motive behind the murder? How the frock will the case be solved? (And pardon us all over the place, that last line is Brahmanandam's signature in the movie. Sometimes he makes it much clearer by omitting the 'r'.)

Nenu Meeku Telusa is great on the eyes and the ears. The angles and pans and tilts, and those fade-outs for every scene's transition, are a treat to watch. Add to this the music - simply marvellous. There's a classy violin interlude towards the end - very AR Rahman-esque. Even the item song(s?) in the film is (are) chic.

That's also the problem with the film. It uses stylish visuals and rock-music background to create scenes that are ends in themselves and not necessarily to add to the story. There are some nail-biting moments - the "will he? Oh, will he???" kind of sequences - but the thrills wear out, as the climax feels like a farce, and you wish the story were more surprising.

Then there's this angle to Aditya's personality that he is endowed with some super-human physical prowess - which is demonstrated in a couple of fights - and you would expect a revelation on some medical, maybe even mystical, link between memory and muscle power. But there's nothing in the plot that is related to it. There's even a 10-minute chase scene, whose chief objective is to showcase the talent of Manoj, s/o Mohanbabu, in the stunts department.

The film would have got 10 marks for performances, but Sneha Ullal subtracts 60. It's not really her fault, because all she gets to do, whether she is a college student or a police officer, is wear denim jackets and skinny Jeans, and try and look awake. Her added responsibility as a cop is to solve Aditya's case by asking the following questions to every person she meets: 1) Where were you at so-and-so time? 2) Can someone prove it?

Still, we are being liberal because a) there are people like Nassar and the late Mallikarjuna Rao in the film; b) Manoj acts convincingly enough to actually appear cutely forgetful, aided by the dimples, sweet smile, well-sculpted body and all, plus, he pulls off all the wry, guy-next-door humour quite well; and c) Riya Sen seriously looks splendid (okay, we've changed our minds; looking good counts as a performance in this film).

It's an interesting theme, and a stylish watch, but don't try and put together arbitrary threads that you see hanging around. Methinks you should walk in with a slight short-term memory loss.

Arrowrusty on 5th Dec 2008, 8:24pm | Permalink
the review says it all....a good watch for action jocks in a long while...and i'm not talking about the usual factionism ...an attempt to introduce a genre in tollywood which cud've used more work.
shivaji on 16th Oct 2008, 8:52pm | Permalink
good visuals,gr8 music,gr8 performance,comedy by manoj

ADVERTISEMENT
This page was tagged for
nenu meku telusa full movie
Nenu Meeku Telusa? telugu movie
Nenu Meeku Telusa? reviews
release date
Manoj, Riya Sen
Follow @fullhyderabad
Follow fullhyd.com on
About Hyderabad
The Hyderabad Community
Improve fullhyd.com
More
Our Other Local Guides
Our other sites
© Copyright 1999-2009 LRR Technologies (Hyderabad), Pvt Ltd. All rights reserved. fullhyd, fullhyderabad, Welcome To The Neighbourhood are trademarks of LRR Technologies (Hyderabad) Pvt Ltd. The textual, graphic, audio and audiovisual material in this site is protected by copyright law. You may not copy, distribute, or use this material except as necessary for your personal, non-commercial use. Any trademarks are the properties of their respective owners. More on Hyderabad, India. Jobs in Hyderabad.