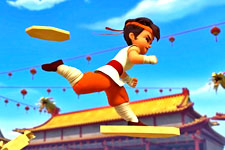 Punarvasu Pendse / fullhyd.com
EDITOR RATING
4.0
Performances
Script
Music/Soundtrack
Visuals
4.0
4.0
2.0
7.0
Suggestions
Can watch again
No
Good for kids
Yes
Good for dates
No
Wait to rent it
Yes
If you asked any of the kids at the theatre where we watched Chhota Bheem Kung Fu Dhamaka, they'd say it was a real delight. Two hours of happy little faces. The same cannot be said for their parents, having to sit through a movie that runs for 113 minutes and that feel like 1,130.

Nobody, including these exasperated parents, can complain about the quality of animation that is on show, especially the plethora of bright colours and lush backgrounds, with the camera dancing along with the action. Chhota Bheem Kung Fu Dhamaka blows the previous films in the franchise (like Chhota Bheem And The Curse Of Damyaan and Chhota Bheem And The Throne of Bali) out of the water in terms of the 3D animation. The commitment to 3D that Hyderabad-based Green Gold Animations has put in is very evident, with characters rushing at and away from you as they fight their way across the screen feeling like it came out of Hollywood's finest studios.

Chhota Bheem (Sonal Kaushal) is now apparently in China, to fight in a Kung Fu tournament organised by Emperor Jian. Crown princess Kia, the Emperor's daughter, is captured by her evil cousin Zuhu, much to the dismay of Bheem and his friends (including her best friend Ming). Bheem sets out on a rescue mission to get Kia back to the Emperor, and in the process makes unexpected friends and learns more about himself.

It is a pity that director (and producer, and CEO of Green Gold Animations) Rajiv Chilaka didn't put in the same amount of effort on the script that he put on the animation. With a story that is vaguely based on Dreamworks' Kung Fu Panda series, Chhota Bheem Kung Fu Dhamaka does not bring anything original to the table. There is no flair to the insipidly written Bheem who is impossibly virtuous and has literally no flaws. Any good literature for children should treat them as living, thinking individuals first - and this film's script, like many other works for children in India, fails miserably at that. Something the creators of this movie could do very well to learn from the adorable Po (from the aforementioned Kung Fu Panda movies) is that his struggle with handling his responsibilities was not only enjoyable for kids but also relatable to adults.

Chhota Bheem Kung Fu Dhamaka assumes that cutesy shots of its characters will cover up the lack of anything memorable. Humour could have been the film's saviour - but fat jokes based on one slow-on-the-uptake character are about all it can offer. The Chinese bit is horribly represented - one would assume more research would go into something that is "bigger than the IPL" according to Chilaka. The Sunidhi Chauhan number "Mahal Mein Sabka Swagat Hai" is almost an insult to authentic Chinese cuisine (again, something that one would assume is served by the Chinese emperor), saying nothing of how forcible it seems in the middle of the movie. And speaking of forcibly tacked on songs, Bheem and his friends dance with an odd 3D Daler Mehndi at the end of the movie.

All in all, we think kids deserve better from a studio that has been making Chhota Bheem films for over five years now. But then Chhota Bheem Kung Fu Dhamaka doesn't have you in its target audience - you are not eight years old. We, however, have a fleeting suspicion that even eight-year-olds are going to think that this movie was made for their younger siblings.
Share. Save. Connect.
Tweet
CHHOTA BHEEM KUNG FU... SNAPSHOT
CHHOTA BHEEM KUNG FU DHAMAKA SNAPSHOT 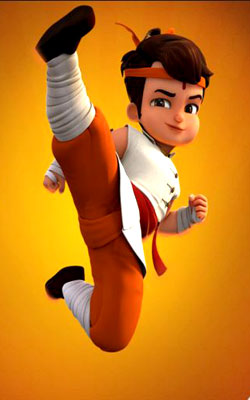 ADVERTISEMENT
This page was tagged for
Chhota Bheem Kung Fu Dhamaka english movie
Chhota Bheem Kung Fu Dhamaka reviews
release date
Sonal Kaushal
theatres list
Follow @fullhyderabad
Follow fullhyd.com on
About Hyderabad
The Hyderabad Community
Improve fullhyd.com
More
Our Other Local Guides
Our other sites
© Copyright 1999-2009 LRR Technologies (Hyderabad), Pvt Ltd. All rights reserved. fullhyd, fullhyderabad, Welcome To The Neighbourhood are trademarks of LRR Technologies (Hyderabad) Pvt Ltd. The textual, graphic, audio and audiovisual material in this site is protected by copyright law. You may not copy, distribute, or use this material except as necessary for your personal, non-commercial use. Any trademarks are the properties of their respective owners. More on Hyderabad, India. Jobs in Hyderabad.