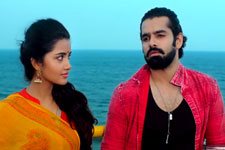 T J Reddy / fullhyd.com
EDITOR RATING
5.5
Performances
Script
Music/Soundtrack
Visuals
6.0
5.0
5.0
7.0
Suggestions
Can watch again
No
Good for kids
Yes
Good for dates
Yes
Wait to rent it
No
You are perhaps familiar with the YouTube channel Screen Junkies and their smash hit, view-juggernaut of a web series Honest Trailers. In case you are not, the show comprises jokes about your beloved movies. The funny cat videos can wait a few minutes.

In the vein of Honest Trailers, I would like to propose my very own spin-off, Honest Pitches. The show would satirise aspiring writers/directors pitching their ideas for movies to prospective producers. As an example (with all due respect to all the makers of this film) here's a short rendition of how Vunnade Okate Zindagi may have been pitched to Sravanti Ravi Kishore.

Director: Kishore garu, I have an idea for a commercial film for 2017.

Ravi Kishore: Is it going to be as good as Ready?

Director: Sir, this story is not only about comedy. We'll have comedy, action, drama, friendship, love, foot-tapping songs the youth will sing while drunk, ex machinas and some cleverly written emotions.

Ravi Kishore: Hmm. That sounds too good to be true, young man. What's the catch?

Director: Well sir, all those selling points I mentioned happen solely in the second half.

Ravi Kishore: Well, what happens in the first half?

Director: Some of the same things, but we needlessly elongate it to make our film 2 and half hours long.

Ravi Kishore: Son, I like your zest, but what you need is good editing to keep you in control. But I see potential here, and you're on board. Also, we share the same name so that gets you some brownie points.

And so went the deal to get Director Kishore Tirumala's project funded. Sadly, the search for good editing never fructified, and so a solid slice-of-life entertainer ended up buried under a pile of cinematic excess.

Vunnadi Okate Zindagi's title is a blatant ripoff of Zindagi Na Milegi Dobara, but the plot itself is a slightly highbrow iteration of your run-of-the-mill Telugu films that praise the importance of the only ship that won't sink - friendship. The movie begins with the younger version of Vasu (Sree Vishnu) befriending Abhiram (Ram). Bonding via their mutual marionette puppet-esque acting, the two grow thick over many aspects of their day-to-day world, and over time find themselves being the two closest friends in a gang of five.

The gang comprises of every stereotype a film buff knows like the back of his hand - the lead, the lead's best friend, the comic relief, the teetotaller, and last and most certainly the least, that one guy who is there just to make up the numbers.

Every great friendship must be put to test, and said test comes in the form of the overly conservative Maha (Anupama Parameshwaran). The unity of the gang and the bond the primary duo share is run through the wringer, and ultimately leads to cracks in the foundation and an absconding Abhiram. But rule number one of The Bro Code unabashedly states that Bros come before the ladies, and the remainder of the film sets up a gently told tale of rekindling friendships while exploring some much needed emotional ground.

Vunnadi Okate Zindagi's undoing is its first hour and its ungodly insistence on undermining its many virtues. Its lofty ideals of expressing the importance of friendships and the changes that occur with the ravages of time are undermined when Vasu is isolated for the first third of the film. The effort it makes at adding a negative shade to Abhiram's overall character is undermined by a third act twist that dents his growth as a person. And its solid juggling of genres in the second half is undermined by the slog that is the first half and the lack of repercussions the many sub-plots of that half have on the film as a whole.

Adding to all of this are the performances and the overbearing score. Ram delivers one of his more understated performances to date by deftly navigating the gamut of emotions through both halves. However, his efforts are undone by the extremely stilted supporting cast whose monotone dialogue deliveries do not help their already one-note characters. All of them have roles the script needs them to fulfil, and their strict adherence to sticking to those codes of conduct while never exhibiting range cripple any dimension their characters could have had.

Devi Sri Prasad is seemingly given his guidelines as well as he rigidly reuses a solitary theme through the course of the film - though I do concede that a song or two are quite entertaining. Thank God for the camerawork and the beautiful location of Ooty that fills the frames up with visual splendour to substitute for the less than stellar auditory experience.

In conclusion, even though it's laden with glaring flaws, if you had to watch just one Telugu movie this weekend, you could lower your expectations a tad and drop by Vunnadi Okate Zindagi because, let's face it, you've already watched Jai Lava Kusa, Spyder and the most inexplicable hit Raja The Great one or more times. While it could have been an hour shorter to be much more impactful, this one is still a decent time at the movies.
Share. Save. Connect.
Tweet
VUNNADHI OKATE ZINDAGI SNAPSHOT 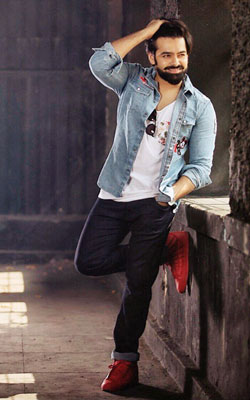 ADVERTISEMENT
This page was tagged for
unnadhi okkate zindhagi movie images
unnadi okate zindagi movie in telugu download
unnadhi okkaty zndhagi telugu movie download
vunnadi okate zindagi telugu movie downloard
vunnadi okate zindagi telugu full movie download movierulz
Follow @fullhyderabad
Follow fullhyd.com on
About Hyderabad
The Hyderabad Community
Improve fullhyd.com
More
Our Other Local Guides
Our other sites
© Copyright 1999-2009 LRR Technologies (Hyderabad), Pvt Ltd. All rights reserved. fullhyd, fullhyderabad, Welcome To The Neighbourhood are trademarks of LRR Technologies (Hyderabad) Pvt Ltd. The textual, graphic, audio and audiovisual material in this site is protected by copyright law. You may not copy, distribute, or use this material except as necessary for your personal, non-commercial use. Any trademarks are the properties of their respective owners. More on Hyderabad, India. Jobs in Hyderabad.