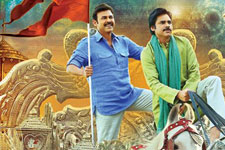 Kritika Deval / fullhyd.com
EDITOR RATING
7.0
Performances
Script
Music/Soundtrack
Visuals
7.0
6.5
6.0
7.0
Suggestions
Can watch again
Yes
Good for kids
Yes
Good for dates
No
Wait to rent it
No
As we struggled to make our way to our bottom row seats, our efforts including an argument with a gentleman who seemed to think seats in a theatre screening a Pawan Kalyan film work on a first-come-first-serve basis, we couldn't help but be struck by the fact that the star's inevitable ascent to divinity happened with this thoughtful remake of OMG - Oh My God!, where he doesn't even get to make his standard magnificent entry until about half an hour into the film. As a matter of fact, the film begins in a rather charmingly unassuming manner, with Venkatesh taking over the screen with his usual self-deprecating presence.

For those who've been living under a rock in recent times, the story begins with Gopala Rao (Venkatesh), an atheist who makes his living by skillfully selling idols of gods and goddesses. When disaster strikes in the form of an earthquake and takes his antique shop with it, he files for insurance, which the company refuses on grounds that the earthquake is an act of God, for which they are not liable.

Frustrated by failed attempts at getting reparations, Gopala Rao approaches a lawyer with the intent of suing whoever can be held responsible for an act of God, whether it be the insurance companies, the omnipotent Being in the sky, or the Being's self-proclaimed interosculaters to the mortal realm. While the lawyer refuses to speak on Gopala Rao's behalf, he does help our beleaguered protagonist build his case, thus setting off a series of events that causes Gopala Rao to lose the support of his pious family, pit his wills against "godmen" with immense followings, and begin to make a chink in the mindless assurance of the mindless fears of the mindless hordes of humanity. And the only one who can support him is the very Being he is battling against.

While Akshay Kumar wasn't exactly a subdued presence in the original, fans of that film could not help but be wary of the makers of this remake ruining the movie by giving in to the heroic theatrics expected of Pawan Kalyan. As it turns out, these fears weren't quite unfounded, but it's not as bad as it could have gotten. Pawan Kalyan takes on his role as Lord Krishna with surprising grace, taking a definite backseat to Venkatesh's equally compelling presence. He is quite charming as he takes on the mantle of scapegrace divinity, his character gently guiding the protagonist through a quagmire of his own making. However, it must be mentioned that the inevitable bits of the film where the camera dwells on Pawan Kalyan for no other reason than that he is Pawan Kalyan are some of the most boring ones, doing considerable damage to the pacing of a plot that depends quite a lot on timing. That sort of fan pandering may work in your usual entertainer, but Gopala Gopala lacks that kind of frenetic activity.

Venkatesh might not have Paresh Rawal's vast repertoire of expressions, but he brings his usual painstaking honesty to his character, holding his own in the film. His chemistry with Pawan Kalyan works quite well, and their dialogues together make for some of Gopala Gopala's highest points. His performance is quite flawless all around, with no hint of the overt preachiness that manages to taint the rest of the film.

Mithun Chakraborthy makes a great villain, although his character here doesn't quite have the depth that it possesses in the original. This is a fault that afflicts the rest of the cast as well, all of whom nevertheless manage to give creditable performances. Shriya Saran doesn't have much to do, but looks nicer than she has in a while.

The music is pretty, and all the better for the fact that it isn't much in evidence. One particular flute melody is especially lovely. The cinematography is fantastic, especially in the scenes with supernatural happenings. The screenplay is well-constructed, except where it slows down to make room for the aforementioned heroics. And, it is aided by dialogue that is well-written, even though lacking the bite of the lines in the original.

In all, Gopala Gopala has much to teach, and gives its audience much to muddle over in a format that appeals to as many kinds of people as possible. Despite its considerable flaws, the movie is an honest effort at doing something different, with an earnestness that touches the heart as much as it prods the mind. Fans of the Power Star or not, only the particularly finicky will fail to be charmed by Gopala Gopala.
Share. Save. Connect.
Tweet
GOPALA GOPALA SNAPSHOT 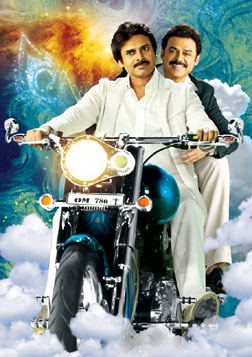 ADVERTISEMENT
This page was tagged for
Gopala Gopala telugu movie
Gopala Gopala reviews
release date
Pawan Kalyan, Venkatesh
theatres list
Follow @fullhyderabad
Follow fullhyd.com on
About Hyderabad
The Hyderabad Community
Improve fullhyd.com
More
Our Other Local Guides
Our other sites
© Copyright 1999-2009 LRR Technologies (Hyderabad), Pvt Ltd. All rights reserved. fullhyd, fullhyderabad, Welcome To The Neighbourhood are trademarks of LRR Technologies (Hyderabad) Pvt Ltd. The textual, graphic, audio and audiovisual material in this site is protected by copyright law. You may not copy, distribute, or use this material except as necessary for your personal, non-commercial use. Any trademarks are the properties of their respective owners. More on Hyderabad, India. Jobs in Hyderabad.