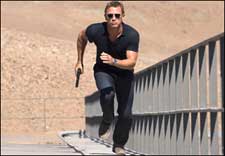 Samrat Sharma / fullhyd.com
EDITOR RATING
7.0
Performances
Script
Music/Soundtrack
Visuals
8.5
4.5
7.0
9.0
Suggestions
Can watch again
Yes
Good for kids
No
Good for dates
Yes
Wait for OTT
No
The more time I have had to think about it, 2006's Casino Royale has fast become one of my favorite action films in a long time. The panache and smoothness with which the new Bond was reinvented for us will always be one of the more gutsy decisions that a major studio took with their star franchise. Needless to recall, the gamble was increasingly rewarding and made Bond fresh for the new generation once again.

Which brings us to the new chapter, which as follow-ups go is saddled with a huge amount of expectations. And with the comparable success of Bourne and the tangential one of Batman, Quantum of Solace was expected to be one hell of a follow-up. Just as much as the spy with the golden gun and all, we are eager for the answers he was hungry for when he turned up at Mr. White's doors at the end of the first film.

More's the pity, then, that the terribly baptized QoS is a directionless meandering mess of a script that feels more like a random studio action flick than a sequel to the bold new resurrection of a film series. The film spins its way through multiple threads to the tale to keep our attention going in a story that never really is much about anything from the get go.

There are interesting plot points mentioned, sometimes even spurted on screen, before being mercilessly killed in favor of the next action set piece. The idea of a secret organization (the titular Quantum) that has dangerous operatives everywhere and that even the MI6 do not know anything about is immensely interesting, but the film doesn't do anything about it. Hell, this is a film where Bond even threatens to go solo, a la License To Kill, but even that is quashed soon enough.

The enigmatic environmentalist Mr. Greene (Mathieu Amalric) has some sort of a blurry villainy about him, and while the writers try to find a decent enough foothold for that character, they make up things for Bond to shoot at or punch. Thrown in the mix is Camille (Olga Kurylenko), a femme fatale, very much of the nouveau Bond school, who has a score of hers to settle. Both wearing a scowl throughout, our two run, and gunners set out after Greene and the elusive Quantum.

Yeah, I know. While the script is as vacuous as they come, the action is brought forth with alarming kinetic energy by director Marc Forster. Having come from prestige dramas, it is a healthy surprise that Marc stages all his action sequences with aplomb, and makes even the oldest of action film tropes seem fresh the way he chooses to shoot them. Forster pulls off some bravura filmmaking by making up exciting ways of shooting his chases and his punch-ups.

He also brings in a lot of style - while some of the homages come off as too contrite, the overall look of the film is gorgeous, and the extra art film flourishes that Forster adds to his action make them that much more special. He has a great flair for the visual language of a studio actioner, and employs his visual storytelling skills to the hilt in pulling off a film that doesn't have much by way of story anyway.

Forster has also cast his film well. While Kurylenko's ham-handed story and sub-plot never amount to much, she is more than adept at keeping great chemistry with Craig that never culminates. Gemma Arterton is absolutely crackling in the small part she gets to play, and is more memorable for it. Amalric is adept at acting vaguely menacing, but not much believable at much else; though he manages to be effective, this is hardly the stuff Bond villains are made of.

Then there's Daniel Craig. The man takes a script that is inadequate at the face of it, and yet manages to turn in a performance that entirely conveys the emotional journey Bond undertakes throughout the entire film. For a film that is 70% all fisticuffs, that is a feat in itself. He manages to pull off even the bad parts of the script together, by a brilliant understanding of the character. If there's one reason you must watch this film, make it this.

The film still is enjoyable, mind, but only because it delivers in big ticket action in a way that not many films have lately, and because the leading man's charisma carries the rest of it through. In trying to set up Quantum as the uber-organization of villains, the film doesn't accomplish much in its own running time. For what it is worth, the memory of the blankness is hardly lasting. I'd hardly recommend this as a film, but as part of a continued story, it still has enough promise to be worth your investment.
Share. Save. Connect.
Tweet
QUANTUM OF SOLACE SNAPSHOT

RATING
5
KaYKaY on 13th Nov 2008, 1:01am | Permalink
Samrat bhai, in your reviews for english movies, you seem to pen down exact spirit of the movie. But, being a very good critic which you often prove to be, your ratings are often deceptive, erratic to the point that they contradict your own words. as in this case.
Bond movies, apart from surviving on the charisma of James 'the immortal' Bond, feed upon the script, characters - such as definitive-to-the-extent-a-la-menacing villains, highly unpredictable but charming (too less an adjective) bond girls, and the script oriented screen plays, with explosive action sequences thrown around to compete it with earlier MI to current Bourne / Masked Men sequence of movies. This one definitely lacked most of the above as you correctly had identified.
For me, this flick is a huge disappointment. Despite great performance by Craig, this might be his last adventure as MI6. Sorry mate, this doesn't deserve a better score than 4/10

ADVERTISEMENT
This page was tagged for
Quantum Of Solace english movie
Quantum Of Solace reviews
release date
Daniel Craig, Olga Kurylenko
theatres list
Follow @fullhyderabad
Follow fullhyd.com on
About Hyderabad
The Hyderabad Community
Improve fullhyd.com
More
Our Other Local Guides
Our other sites
© Copyright 1999-2009 LRR Technologies (Hyderabad), Pvt Ltd. All rights reserved. fullhyd, fullhyderabad, Welcome To The Neighbourhood are trademarks of LRR Technologies (Hyderabad) Pvt Ltd. The textual, graphic, audio and audiovisual material in this site is protected by copyright law. You may not copy, distribute, or use this material except as necessary for your personal, non-commercial use. Any trademarks are the properties of their respective owners. More on Hyderabad, India. Jobs in Hyderabad.