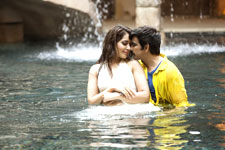 Josh / fullhyd.com
EDITOR RATING
4.0
Performances
Script
Music/Soundtrack
Visuals
5.0
4.0
6.0
7.0
Suggestions
Can watch again
No
Good for kids
No
Good for dates
No
Wait to rent it
Yes
Catching a movie at a place like Prasads is a bit of a problem because of all those people with cameras and mics who turn up in hordes and practically block the paths to the exit to gather the "public talk" on the film. I endeavoured to avoid them and go on my way but two guys caught me all the same and asked me if I watched the film. I did, of course. So I was led to talk about it.

How was it, he asked. I replied it wasn't great. He seemed a little upset. How about Ravi Teja, he asked. Ravi Teja put in all that effort, sure, but it wasn't worth it because the movie wasn't great, I let him know. So the story isn't good, he speculated. Nope, nor are the script or the direction, I added.

He was visibly uncomfortable. By this time I was getting wind of the possibility that this gentleman may be a fan of the star. In an attempt to salvage the situation, he suggested that I perhaps had high expectations. I let him know I had none at all. And I was still disappointed.

That video could be my review. However, for the three reasons that a) fullhyd.com will not pay me for talking on someone else's platform, and b) I have no intention of having my readers spectate on the spectacle which is the balding forehead over my spectacles, and c) I do not have a clue of what TV/Youtube channel interviewed me, I'll get on with the review.

Kartikeya (Ravi Teja) lives with his family in Pondicherry. When we say "lives with his family" we cannot do justice to the exaggeration that Tollywood is capable of when it comes to showing a guy that loves his family. He has a company where every desk, every corner, all visible space is filled with quotations of how family matters a lot (personal favourite being "Family is Devine" - in that spelling). They spend so much time with each other, drop their mobile phones in a satchel before sitting for dinner, and are all smiles all the time.

Notwithstanding anything in the last paragraph, Kartikeya's family decidedly looks and feels like a professional ensemble hired to play a family. Annapurna is hired for a couple of laughs (she earns them), Sri Ranjani for the "motherly" appearance, Jayaprakash Reddy to bear the burden of the only functional emotional scene in the film, and two Telugu-speaking girls as sisters because they don't make the "glossy Greco-Roman fairness" cut like the heroines.

Okay, so he loves his family. So he decides to get married for the sake of his father. So he courts Pushpa (Rashi Khanna, who has comic timing which may be exploited in a different film at a different time but not so much in Touch Chesi Chudu). And he beats up some goon who messes with his staff. And he comes across a guy whose very sight makes Kartikeya pull the revolver off a nearby cop and start shooting in public.

Now comes the spoiler. Please forgive me. It's just... you know, it's not in my nature to give away spoilers like this and jeopardise your viewing experience. I mean, one could argue that no matter how the film is and what the film is, it is just morally indefensible to divulge a vital plot point to someone just like that. I really do feel terrible about it, I swear, but I have to tell you - Ravi Teja is a cop in the film. What? You knew it already? Crap...

Well, after that you have a flashback and the final show-off ...um, standoff. Final standoff.

Director Vikram Sirikonda has flair - with all the unnecessary things. There are interesting shots and frames but you can't care much more for them than you care for the arbitrary girl who gets shot and killed by the villain. And when I say you can't care more, you know I'm saying you can't care less.

The rest of everything is like that, too. The production values are great, but the music is just about catchy, the performances are just about functional, the jokes just about work, and the heroines just about wear clothes (yay!).

All of this (except the glossy Greco-Roman fair heroines and their wonderfully short clothes) is, of course, the failure of the director-writer team in coming up with entertainment. Ravi Teja brings his energy and cheer to the table. He probably should have taken a look at what the creative team brought to the table in their turn. And he probably shouldn't have touched it no matter how much they egged him on.
Share. Save. Connect.
Tweet
TOUCH CHESI CHUDU SNAPSHOT 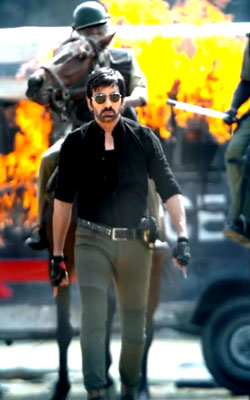 See Touch Chesi Chudu full details
TOUCH CHESI CHUDU USER REVIEWS
1 - 2 OF 2 COMMENTS
POSITIVE  |  NEGATIVE |  NEWEST  |  OLDEST  |  MOST HELPFUL  |  LEAST HELPFUL
Seshu on 2nd Feb 2018, 10:23pm | Permalink
When the teaser was released and the mass Raja yanked this guy and threw him onto another helpless guy, so effortlessly, and then walked with this swag while a few nobodys in the foreground made way for the camera... that's when I prayed for a 4 out of 10 (for the greater good) and my prayers have been answered. Thank you Josh. As usual, great review.
Josh on 3rd Feb 2018, 8:45pm | Permalink
And thank you, Seshu :)
Hari on 2nd Feb 2018, 9:53pm | Permalink
So, another ho-hum telugu movie gets released. Should end up on TV pretty soon.

ADVERTISEMENT
This page was tagged for
Touch Chesi Chudu telugu movie
Touch Chesi Chudu reviews
release date
Ravi Teja, Raashi Khanna
theatres list
Follow @fullhyderabad
Follow fullhyd.com on
About Hyderabad
The Hyderabad Community
Improve fullhyd.com
More
Our Other Local Guides
Our other sites
© Copyright 1999-2009 LRR Technologies (Hyderabad), Pvt Ltd. All rights reserved. fullhyd, fullhyderabad, Welcome To The Neighbourhood are trademarks of LRR Technologies (Hyderabad) Pvt Ltd. The textual, graphic, audio and audiovisual material in this site is protected by copyright law. You may not copy, distribute, or use this material except as necessary for your personal, non-commercial use. Any trademarks are the properties of their respective owners. More on Hyderabad, India. Jobs in Hyderabad.