The End of the Affair Review 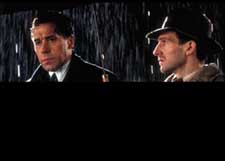 Feroz Hassan / fullhyd.com
EDITOR RATING
6.0
Performances
Script
Music/Soundtrack
Visuals
NA
NA
NA
NA
Suggestions
Can watch again
NA
Good for kids
NA
Good for dates
NA
Wait for OTT
NA
You've read a good novel and you are eager to watch it on screen. The long wait for the movie's release ends, and you land at the theater. You count the audience, and it's only a few dozens. Good, you say, there isn't going to be much of a distraction here! However, once the movie starts, you get more than your share of it, thanks to a constant buzzing sound and a distorted audio. I'm still to know what to blame: the print or the projector. Whatever it was, it destroyed the feel of the movie, beyond redemption.

Anyway, this screen adaptation of Graham Greene's novel just about measures up to expectations. Just about. Let me put myself in the clear, straightaway. The novel has such a strong emotional appeal that a scene-by-scene adaptation like this can only serve to reinforce the contents of the novel. Neil Jordan has done all he could to stick to the novel, barring the inexplicable deviation towards the end of the movie. Such a project would be more of a delight and a test for the actors than it would be for the director. It would be no less a challenge for the director, but if the book were being adapted literally, then the job would become elementary, wouldn't it?

Maurice Bendrix (Ralph Fiennes) is the author who begins this 'diary of hate', as he calls it, and from here, the narration shifts back and forth to give us the details of Maurice's relationship and subsequent abrupt break-up with Sarah Miles (Julianne Moore), the wife of a diplomat Henry Miles (Stephen Rea). The incident which spawns the break-up is a bomb raid that injures Maurice. On his recovery a few minutes later, he finds that the world around him has changed. Sarah is praying - the two pride themselves in their atheism - and is less than happy to see him, and that's the end of it.

Two years later, through a chance meeting with Henry Miles, Maurice comes back in her life, more jealous than ever. He puts a detective (Ian Hart) on her trail, and gets hold of her diary. A shockingly different version of that incident is recorded in it that clears the air, only for Sarah to die.

The extent to which the movie is similar to the novel can be gauged from the fact that the back 'n forth narration is as abrupt and confusing as the novel is. But, for all the similarities, the movie ought to be as good as the novel. It could've been, but for the hurried narration, which is eminently excusable keeping in mind that so much is captured in just two hours. And if you manage to keep the novel out of your mind, which will be difficult if you've read it, then the emotions of the movie would appeal to you much more.

The performances are all creditable. Ralph Fiennes for one must have a strong natural streak of jealousy and hatred. His performance in Schindler's List and the present one point to that. Julianne Moore, however, plays the most important character in the film, and it is in the sketching of her character that the movie also falters a bit. Sarah's character isn't as strong a presence as she could have been.

A movie worth watching, with a better print or a different theater.

ADVERTISEMENT
This page was tagged for
The End of the Affair english movie
The End of the Affair reviews
release date
Ralph Fiennes, Stephen Rea
theatres list
Follow @fullhyderabad
Follow fullhyd.com on
About Hyderabad
The Hyderabad Community
Improve fullhyd.com
More
Our Other Local Guides
Our other sites
© Copyright 1999-2009 LRR Technologies (Hyderabad), Pvt Ltd. All rights reserved. fullhyd, fullhyderabad, Welcome To The Neighbourhood are trademarks of LRR Technologies (Hyderabad) Pvt Ltd. The textual, graphic, audio and audiovisual material in this site is protected by copyright law. You may not copy, distribute, or use this material except as necessary for your personal, non-commercial use. Any trademarks are the properties of their respective owners. More on Hyderabad, India. Jobs in Hyderabad.