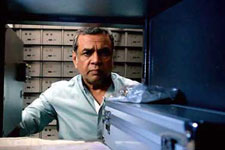 Kritika Deval / fullhyd.com
EDITOR RATING
4.5
Performances
Script
Music/Soundtrack
Visuals
5.0
3.5
5.0
5.5
Suggestions
Can watch again
No
Good for kids
No
Good for dates
No
Wait to rent it
Yes
They said it once, and very well, too. Then, they said it again, not quite as well. Now, they're at it yet another time, and we don't quite know what to think. We refer, of course, to "the makers of OMG" who aren't quite, and their hijinks with faith and its vagaries.

Dharam Sankat Mein is yet another film exploring religion-based conflict in daily life in India, and, to be honest, we are bored. Not because the message that we need to stop ill-treating people because of millennia old books is one that does not bear repeating. Not because people aren't so silly that they'll let things that don't really have anything to do with them bother them to dangerous extents. And most certainly not because religion-based identity isn't constricting.

To explain why, we'll need to begin with the premise. Dharam Sankat Mein is basically an extension of OMG, and an adaptation of a British comedy called The Infidel which happens to be about a British Muslim immigrant who finds out that he was in fact born Jewish. Paresh Rawal plays Dharam Pal, a caterer in Ahmedabad who is decently well off, not particularly stringent with following his religion, but quite casually intolerant of Muslims.

Pal lives with his wife, daughter and son, the latter of whom wants to marry the daughter of a devotee of Neelanand Baba (Naseeruddin Shah). Dharam Pal starts his day annoyed by the sound of morning prayers from a mosque, and ends it with an argument with his Muslim lawyer neighbour Mehmood Nazeem Ali Shah Khan Bahadur (Anu Kapoor) who had the audacity to live in "their" neighbourhood.

This is a decent beginning, because this sort of discomfort with other religions is believable, and most of us would probably recognise at least a parent or an uncle or aunt in Rawal's character. Meanwhile, Pal's son wants him to actually become a more devout Hindu so that he can get married to the aforementioned devotee's daughter. In the midst of all this, Pal discovers that he was adopted and that his father was a Muslim. Oh, the horror!

Enormously disturbed by this, Pal tracks his father down to a religious nursing home, only to be told by the maulvi in charge that he will have to learn to be a "good Muslim" if he doesn't want his ancient, bed-ridden father to die of a heart attack. You can probably see where all of this could get super confusing in the long run (...time - long run time).

So, anyway, we begin with Pal learning how to be a devout Hindu and a devout Muslim at the same time, while hiding his new secret from his family. He and Lawyer Long Name become great friends. Things are sort of tense, sort of clichéd, and sometimes a bit lack-wit, and the next minute Pal is standing at the head of a mob of Neelanand's followers burning a skull cap. Now, we don't really like using the phrase "that escalated quickly" because far too many people are using it for the wrong reasons, but, really, that escalated quickly!

And, then, there are all of the hollow stereotypes and the even more hollow platitudes spouted by the characters. For some reason, our filmmakers are unable to just tell us a story that takes us to the right conclusion. Or, perhaps they just believe that none of us will know what they're actually saying unless they pause all action to fit in ten-minute-long ranty soliloquies every so often. The dialogue here will either make you giggle yourself silly, or groan in embarrassment for these brilliant performers who have been reduced to one of those little proverb books.

Paresh Rawal is so good that, if not for him, this film would've been unbearable. Annu Kapoor and Naseeruddin Shah are made to ham it up to vindaloo levels. The rest of the cast is just one flat character after another. The cinematography is allright, and the music mediocre. The editing could've been so, so much more ruthless.

Like yet another dubious faith-based industry, homeopathy, Dharam Sankat Mein dilutes its active ingredients, aka the "message", to 0.00000001%. And just like homeopathy, its effectiveness, or even the intent thereof, is highly suspect
Share. Save. Connect.
Tweet
DHARAM SANKAT MEIN SNAPSHOT 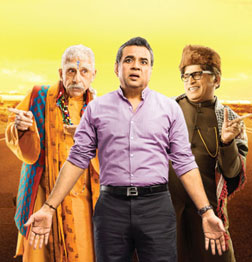 ADVERTISEMENT
This page was tagged for
Dharam Sankat Mein hindi movie
Dharam Sankat Mein reviews
release date
Paresh Rawal, Naseeruddin Shah
theatres list
Follow @fullhyderabad
Follow fullhyd.com on
About Hyderabad
The Hyderabad Community
Improve fullhyd.com
More
Our Other Local Guides
Our other sites
© Copyright 1999-2009 LRR Technologies (Hyderabad), Pvt Ltd. All rights reserved. fullhyd, fullhyderabad, Welcome To The Neighbourhood are trademarks of LRR Technologies (Hyderabad) Pvt Ltd. The textual, graphic, audio and audiovisual material in this site is protected by copyright law. You may not copy, distribute, or use this material except as necessary for your personal, non-commercial use. Any trademarks are the properties of their respective owners. More on Hyderabad, India. Jobs in Hyderabad.