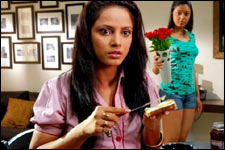 Deepa Garimella / fullhyd.com
EDITOR RATING
2.0
Performances
Script
Music/Soundtrack
Visuals
5.0
2.0
3.0
4.0
Suggestions
Can watch again
No
Good for kids
No
Good for dates
No
Wait to rent it
Yes
What a good thriller first needs is to be a good film. The next challenge is to get the unintentional comic relief out of the way. The cinematic nuances come in about 3-4 strata later. Apartment, clearly, is not the place to delve into a comprehensive analysis of film-making.

"Inspired" by Single White Female 2, the plot isn't too much to speak of. Preeti (Tanushree Dutta) is an airhostess who moves into a 2BHK in Mumbai with her boyfriend Karan (Rohit Roy). She dumps him, suspecting him of two-timing her - based on outrageous premises - and looks for a new roommate.

In walks the highly domesticated small-town data entry operator Neha (Neetu Chandra), who is more than happy to cook and clean for Preeti, call her "didi", and wait up for dinner even. Her over-possessiveness mildly annoys Preeti, who, unlike the audience, doesn't see a volcano erupting sometime in the near future.

Neha resents the presence of Karan in Preeti's life, and when the couple makes up, she is highly insecure about the fact that she may have to move out of the apartment. She turns psychopathic and first wreaks revenge on the man instrumental in getting them together - their well-meaning elderly next-door neighbour Tanha (Anupam Kher).

Neha's past, when dug up, consists of a history of overly possessive behaviour including murder - termed bipolar schizoprenia. In the rest of the story, Preeti has to deal with the increasingly deranged Neha.

Apartment tries so hard to be obvious about its subtlety it's like reading a set of instructions spelt out in bold capitals with one-finger spacing. Whether its Preeti's inane mistrustfulness of her boyfriend or Neha's batty behaviour, the film comes across as expecting to be considered deep and mysterious, but falls flat. Add to this the messy anti-climax and a messier climax, and you have a production begging to be taken off the theatres.

Neetu Chandra is the only actor with any semblance of a substance-filled role, but she just doesn't get her creepiness right. She is contrived, and only adds to the whole movie's effort of spelling out things pretty loudly and ineffectively.

Tanushree Dutta tries putting in a dignified performance but her weaknesses as an actress are pretty evident even in the most basic of scenes. Rohit Roy and Anupam Kher are much more convincing, though.

Attempts to make Apartment look like a proper movie include a couple of thoroughly avoidable songs and an item number. The production values aren't something to be thrilled about either.

ADVERTISEMENT
This page was tagged for
apartment movies hindi
Apartment hindi movie
Apartment reviews
release date
Neetu Chandra, Tanushree Dutta
Follow @fullhyderabad
Follow fullhyd.com on
About Hyderabad
The Hyderabad Community
Improve fullhyd.com
More
Our Other Local Guides
Our other sites
© Copyright 1999-2009 LRR Technologies (Hyderabad), Pvt Ltd. All rights reserved. fullhyd, fullhyderabad, Welcome To The Neighbourhood are trademarks of LRR Technologies (Hyderabad) Pvt Ltd. The textual, graphic, audio and audiovisual material in this site is protected by copyright law. You may not copy, distribute, or use this material except as necessary for your personal, non-commercial use. Any trademarks are the properties of their respective owners. More on Hyderabad, India. Jobs in Hyderabad.