Santa Vs The Snowman Review 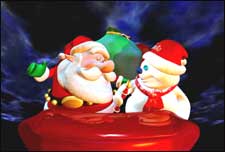 Ghazala Rizvi / fullhyd.com
EDITOR RATING
5.0
Performances
Script
Music/Soundtrack
Visuals
NA
NA
NA
NA
Suggestions
Can watch again
NA
Good for kids
NA
Good for dates
NA
Wait to rent it
NA
This one might make your kids have that truth-about-Santa talks coming before the bees-and-babies one. For here, Santa is the CEO of his elvine battalion, and Snowman, very un-Yeti like, the master of his ‘million minions’. And this X-Mass, the duo go to a war!

Unconventional seems to be the prevailing convention of director John A Davis’ Santa Vs The Snowman. It’s a Christmas story that meanders into the irreverent, but makes lots of visual sense when seen through slightly tainted glasses. Like a beautifully wrapped box which contains zilch inside, the movie will excite you, even if only to dampen your spirits a little.


Pudgy, well-rounded Santa (Jonathan Winters) goes after button-faced Snowman - reason being that the poor lonely mute Snowman takes a flute from the Santa’s toy factory. Well, he does it prematurely, not waiting for Christmas, and thus gets ticked-on on Santa’s naughty list.

Now Snowman was unable to understand why a Santa who swaddles in red and white and worries over his scales in his candy-floss loo, should be running the show. Loved by all, kids and elves alike, Santa lives in the lap of luxury while Snowman sucks upon dry ice cubes.

It’s X-Mass eve and time to churn out presents world wide, but Snowman besieges Santa and becomes the new sled-rider. The rest of the story deals with how Santa regains his turf, and wins Snowman as a friend too.

The flick takes you through odium of emotions - it gets you intrigued with the excellent care given to detail, it gets you tickled with Snowman’s incognito foray into Santa Land, and it makes you hilarious with Santa’s reindeer bombers and elvine ground force. There are hints of elvine live-in relationships and 'why to buy an igloo when you can get ice for free' talks (where 2 security elves discuss their commitment phobias and how to sidestep marriage).

The movie tries to rejuvenate the Santa legend with a face-lift. This Santa is not only a cheer-and-toy distributor, but also a Commander Supreme, capable of meeting out justice to those who cross the line. But he never digresses from his primary activity - loving kids.

The animation is sleek and the 3D makes you reach out for the stars (that’s what happens when the warriors explode) on screen. All the characters are brazenly cartoonish, and unlike Shrek or Fiona, do not strive to step beyond the make-belief. The big battle imitates the Orc Wars of the Lord Of The Rings, with a pun intended on the Star Wars sequels.

ADVERTISEMENT
This page was tagged for
santa vs snowman movie
Santa Vs The Snowman english movie
Santa Vs The Snowman reviews
release date
Winters, Victoria Jackson
Follow @fullhyderabad
Follow fullhyd.com on
About Hyderabad
The Hyderabad Community
Improve fullhyd.com
More
Our Other Local Guides
Our other sites
© Copyright 1999-2009 LRR Technologies (Hyderabad), Pvt Ltd. All rights reserved. fullhyd, fullhyderabad, Welcome To The Neighbourhood are trademarks of LRR Technologies (Hyderabad) Pvt Ltd. The textual, graphic, audio and audiovisual material in this site is protected by copyright law. You may not copy, distribute, or use this material except as necessary for your personal, non-commercial use. Any trademarks are the properties of their respective owners. More on Hyderabad, India. Jobs in Hyderabad.