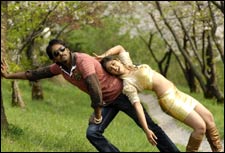 Deepa Garimella / fullhyd.com
EDITOR RATING
3.5
Performances
Script
Music/Soundtrack
Visuals
4.0
3.0
4.0
6.0
Suggestions
Can watch again
No
Good for kids
No
Good for dates
No
Wait to rent it
No
The hot Satyavathi (Ileana) is all of 6 years old. Or at least that's what she seems to think, going by the size of her clothes. And that's what you think, going by her IQ. Anyway, she had gone to Europe when she was 6, and has come back home after 14 long years.

Her dad's enemies in Venkatapuram kidnap her as soon as she arrives, but Munna (Manchu Vishnuvardhan Babu) enters the scene and saves Satya. He impresses Satya's family and stays put in their house, where he woos her by telling her that he knows all her vital statistics. You're wondering if he was the one who designed her piteous wardrobe, and probably that's what Satya is thinking as well, because she wants to get rid of him.

So when her parents fix her wedding with another guy, she agrees. But she then starts falling in love with Munna. Soon, horrifying truths come tumbling out one after another - the bridegroom's family is a bunch of impostors sent by Satya's father's enemy; Satya already has a boyfriend Krish (Venkat); and, the film has another 90 minutes to go before it can breathe its last and audiences can start breathing again.

She also declares that she and Krish are getting married soon. Krish is the younger brother of a casino baron Ozo alias Ogirala Jogaiah (Mohan Babu). Ozo is a funny man, but he was being funniest when he decided to fund this movie. Now for another twist - Ozo tells us that Munna is actually Saleem, a major mafia don. The rest of the movie is about how Saleem and Satya get together, and it winds up well before the Human Rights Commission storms in and rescues the audiences.

Saleem seems to be made for a specific kind of audience, most of who don't seem to exist. And we can't guarantee that those who watch Saleem will continue to exist. The story is pointless, the comedy is bland, the dialogues are plebian, the stunts are laughable, everyone in the cast has a laboured and contrived dialogue delivery, and the music is sad. Indeed, you're left wondering what exactly the revenue model for these kinds of films is, since the budget looks quite humongous.

Ileana's navel performs well. So do her waist, bare back, and the rest of her perpetually undulating body. Vishnuvardhan Babu is enthusiastic, but he needs to do something intelligent to his career now. Mohan Babu is over-the-top, and Kaveri Jha's there for the spaces between the clothes.

And like we said, the budget is big and the film looks quite sleek. No points in the innovation department, though. As for the songs, Sandeep Chowtha needs to wake up and listen to what his music sounds like.

On the whole, you can watch Saleem, but only if it is by an act of God.
Share. Save. Connect.
Tweet
SALEEM SNAPSHOT

MR. Gopalav no one is curse to film industry. Mohan Babu remains entertainer till date and their sons are picking up well. The movie may be bad bu it doesnt mean that they are useless. Manoj's Nenu Meku Telusa is defintly one the best movies industry ever produced. Manoj is really doing well and Vishnu need to concentrate on stry selection. lakshmi's show is a hit and have become talk of the town in know time and dont forgt tht she is a well trained film technician.

It is very easy to throw stones at someone but , just think before doing tht.
and abt movie it is a disaster.......
that is also not enough fr this movie.


RATING
2
Suresh on 14th Dec 2009, 9:14am | Permalink
May be this is one of the worst movies released in the recent times.. This movie should get zero rating, but as there is no such rating to give, giving one.....
Gopalav5 on 12th Dec 2009, 3:47pm | Permalink
I think Manchu Mohanbabu's family is a curse to the Telugu Film Industry. Mohan Babu could never act before and now and the same applies to his two sons Vishnu and Manoj and daughter Lakhmi. Today i went to watch saleem and have taken a vow not to watch any Telugu Film on the First day and wait till the movie has run for atleast two weeks. with regard to saleem it is the most horrible film ever made and I wonder what is wrong with YVS to make such a worst film and a piece of advice to ILLEANA. Learn, I repeat Learn from GENELIA your counterpart who hails from Goa/Mumbai like you and see where she is now and where the hell you are? Just by showing your skin and trying to do some atrocious belly dance like moves you cannot impress the audience. Better choose your films properly .

ADVERTISEMENT
This page was tagged for
Saleem movie review in Telugu
ogarala babu movie
Saleem telugu movie
Saleem reviews
release date
Follow @fullhyderabad
Follow fullhyd.com on
About Hyderabad
The Hyderabad Community
Improve fullhyd.com
More
Our Other Local Guides
Our other sites
© Copyright 1999-2009 LRR Technologies (Hyderabad), Pvt Ltd. All rights reserved. fullhyd, fullhyderabad, Welcome To The Neighbourhood are trademarks of LRR Technologies (Hyderabad) Pvt Ltd. The textual, graphic, audio and audiovisual material in this site is protected by copyright law. You may not copy, distribute, or use this material except as necessary for your personal, non-commercial use. Any trademarks are the properties of their respective owners. More on Hyderabad, India. Jobs in Hyderabad.