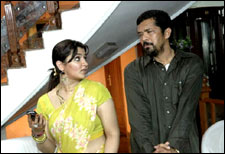 Deepa Garimella / fullhyd.com
EDITOR RATING
2.5
Performances
Script
Music/Soundtrack
Visuals
6.0
2.0
4.5
4.5
Suggestions
Can watch again
No
Good for kids
No
Good for dates
No
Wait to rent it
No
The proudly declared moral of Gentleman is that men will be men and mice will be mice, but audiences always have 4 legs and a tail. However, you don't realize this all at once. The last part of the moral hits you first, in the beginning itself. Muddu Krishna (Posani), the protagonist of the movie, has just donated his liver to his wife Neeraja (Aarti Agarwal), but survives enough to yak about how much he loves her and wants her to live.

The flashback reveals why things turned out this way. MK's brother had stabbed Neeraja when she was cavorting with a boyfriend, and that is why she's in hospital. But several pertinent questions arise. Why was Neeraja cavorting with her boyfriend so openly? Why does the married woman have a boyfriend in the first place? Why was her husband waiting on the footpath to let her finish the cavorting business? How many people have actually witnessed you getting into the theatre playing this?

Neeraja is a devoted wife to Muddu Krishna. However, the latter actually spends all his free time feeling up the women in his office and his London girlfriend Louis who's stashed away in a resort, all the while having his wife think he's God. This he accomplishes by once showing her how much he loves her, by drinking acid. He also shows how much he hates the audience, by surviving that.

One day, on TV, a scientist (Kota Srinivasa Rao) who has studied mice, is presenting some findings that he thinks are amazing - not that the creatures never die of films like these even while they're scuttling about in the cinema halls, but that they're inherently polygamous in matters of sex.

Following this, Surekha (Surekha Vani), Neeraja's friend, hatches a plan for Neeraja to find out if her husband is indeed the God she thinks she is. Neeraja uses an unidentified phone number and a fictitious character called Ruchi, and flirts with Muddu Krishna. Now, our man is always eager to be dirty-talked into anything, provided it involves a woman, or at least one or two of her parts. As a result, no one is amused, least of all Neeraja. Ultimately, he is caught red-handed, and Neeraja's father, to teach him a lesson, arranges a fake boyfriend for Neeraja.

Gentleman is no different from Posani's earlier flicks, but is milder than them. The message here is that men can never stop themselves from cheating on their wives, even though they expect women to be faithful. Unfortunately, it is delivered with the subtlety levels of an elephant sneezing, and with the diplomacy of a monkey sitting on your head and grabbing the banana in your hand. And with the aesthetic values of both of them making rude faces at you.

The women are there to be felt up all over, and the hero's vile character gives the movie the license to accompany that fact with soul-jarring dialogues. The characters are comic-bookishly broad-stroked as well, and there's no creative genius anywhere. Indeed, if this is what Posani's movie on men committing adultery looks like, then maybe by the time he makes one on women cheating on their husbands, you should just leave town.

The music is not what you'd come to watch this movie for, and it stays that way. The shooting has all been done indoors, on a shoestring budget. The film, too, should have stayed that way - indoors.

ADVERTISEMENT
This page was tagged for
Gentleman telugu movie
Gentleman reviews
release date
Posani Krishna Murali, Aarti Agarwal
theatres list
Follow @fullhyderabad
Follow fullhyd.com on
About Hyderabad
The Hyderabad Community
Improve fullhyd.com
More
Our Other Local Guides
Our other sites
© Copyright 1999-2009 LRR Technologies (Hyderabad), Pvt Ltd. All rights reserved. fullhyd, fullhyderabad, Welcome To The Neighbourhood are trademarks of LRR Technologies (Hyderabad) Pvt Ltd. The textual, graphic, audio and audiovisual material in this site is protected by copyright law. You may not copy, distribute, or use this material except as necessary for your personal, non-commercial use. Any trademarks are the properties of their respective owners. More on Hyderabad, India. Jobs in Hyderabad.