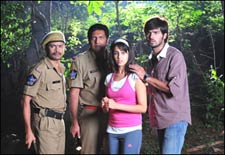 Deepa Garimella / fullhyd.com
EDITOR RATING
7.0
Performances
Script
Music/Soundtrack
Visuals
8.5
6.5
8.5
6.5
Suggestions
Can watch again
No
Good for kids
Yes
Good for dates
Yes
Wait for OTT
No
Katha's makers probably wanted to make a point when they inserted the quip about how the movie industry and "10th fail" generally go together. That piece of spunk aside, in an industry where "over-the-top" is the all-time favourite gimmick, Katha takes you aback because it's so bravely straightforward.

Marketed as a romantic thriller, the movie is almost naive in its uncomplicatedness. It's probably the budget, but it really has no devices - to either distract you or evoke uncomfortably strong emotions. It's a plain murder mystery, with no frills. So much so that we'd even recommend it as a family watch.

The plot is set in Araku, where a film unit comes to shoot. Krish (Arun Adith) is a director, and is penning the script for the film. He runs into Chitra (Genelia), a school teacher who has moved to Araku alone, and falls in love with her.

Chitra witnesses a murder in the valley, but her version of the story is rendered dubious when Krish comes to know she has a medical history of paranoia. How the mystery is solved and what Chitra's past is forms the rest of the film.

At the periphery, Katha touches upon the issue of how a mentally over-the-edge person gets mileage mostly in terms of pity or revulsion, and rarely in terms of empathy. It's easier for the rest of us to quickly dismiss his or her fears as irrational, and in some cases, for medical terminology to overtake the power of the human touch.

The movie's weakness is that nothing much happens until the last half an hour of the movie. It tries too much to build character and establish the background, and the result is a slow-moving first half.

Which is mostly why that last half an hour really works. Why else would a scene of someone sneezing in the dark and giving himself away to the killer bring on a theatre-full of full-throated groans?

This is Genelia's show all the way, and while her role is a blend of innocence and psychosis, she puts on a compellingly pleasant show that leans on the former. It's her best performance till date, and she's on the way to pick up an award or two.

However, the lead pair's romance is sanitized to a large extent, with the result that Genelia and Arun Adith look like school buddies and not much else. Still, he's pretty earnest, and delivers a rather honest performance.

Prakash Raj, as the police officer at Araku, is great as usual, though it's a role that could have had a bit more meat. And Raghu Babu, the only comic figure in the movie, is given some well-written jokes. For him, it's probably the only time he gets to go solo and meaningful both at once, and he's lapped it up eagerly.

The songs are a sizeable positive in Katha. Though there are few of them, they speak of a meticulous effort in composition. The music adds to the film's mood, lending more profundity than unwarranted tension and tears.

Genelia wears make-up, and that's likely the most luxury the visuals could afford. The visuals are on the lower-end of the spectrum, and the effort seems like a short-film festival entry sometimes. However, it's a decent job on the whole.

What Katha makes you do is want to turn the page, and that is why you should pick it up. Sometimes, simplicity is its own gimmick.
Share. Save. Connect.
Tweet
KATHA SNAPSHOT

See Katha full details
KATHA USER REVIEWS
1 - 7 OF 7 COMMENTS
POSITIVE  |  NEGATIVE |  NEWEST  |  OLDEST  |  MOST HELPFUL  |  LEAST HELPFUL
USER RATING
1.5
2 USERS
Performances
Script
Music/Soundtrack
Visuals
2.5
3.0
5.0
5.0
Can watch again - NA
Good for kids - NA
Good for dates - NA
Wait for OTT - NA
Truth on 31st Dec 2009, 11:16pm | Permalink
The movie actually has a good twist in the story. But the director wasted his chance by using that twist in the end (last 15 mins). Apart from this the movie proceeds as if it is a drama taken by a film student in his pre kg class.

Not at all worth anyones time.

Prob this is good for dates since girls (in general, not all) would be afraid of certain scenes.

Siva on 17th Dec 2009, 9:45pm | Permalink
@DM: You may be right on "ratings depend on who you're writing your reviews for". But its important that a critic should not shy away from giving a good rating when he comes across a good film just because it may not be a commercial success. You would have missed gems like black friday, maqbool. The last one I missed like that was Mr.Medhavi ( This was indeed one of those scripts which was way beyond our regular commerical movies level )
Billa was commercially flop ( all big stars's movies run for 100 days in many theatres )
anyway, this is not a personal vendetta against deepa. I don't even know who she is.

All I hope is she reads more about movie criticism. need to understand that trying to write every single line in a funny way is not funny.
One best way to start is making www.rogerebert.com your home page if you are aspiring to be a great critic :-)

degenerate mutant on 17th Dec 2009, 11:38am | Permalink
@Siva: well, except chandni chowk to china, every movie you mentioned there is a commercial hit as far as i know (billa crossed 100 days). and luck by chance and banam (i think fullhyd did say nice things about banam, though i dunno about luck by chance) had average runs, if they were not altogether flops. i also think ratings depend on who you're writing your reviews for...
sivapk on 16th Dec 2009, 11:33pm | Permalink
and one more thing - it will take some brains to appreciate Oye Lucky Lucky Oye
Siva on 16th Dec 2009, 10:32pm | Permalink
Hi DM, good to see you comment after a long time.
The writing style and her ability to criticize a movie have been a point of discussion for some time now in fullhyd. Her choices are weird some times. For example, she likes Billa ( an unbelievable 7/10 ), chandini chowk to china, Fashion, souryam, chintakayala ravi and golmaal returns and can't recommend a movie like luck by chance or Banam. Every single review is written in same style, same kind of jokes.
Now don't say if you don't like, don't read. This is the the most widely used Hyd site and I care about it.

degenerate mutant on 15th Dec 2009, 6:28pm | Permalink
i haven't seen this movie, but i don't know too many of deepa's "judgemental disasters". movies seem to run proportional to her ratings most of the times - she's certainly better than anyone else i know.
Siva on 15th Dec 2009, 5:57pm | Permalink
lol.. this will go down as one more proof of Deepa's judgemental disasters. "Why else would a scene of someone sneezing in the dark and giving himself away to the killer bring on a theatre-full of full-throated groans?" - because the movie has been setting it up from scene 1 and its done so many times that you know that this is going to happen.

The only reason I went to the movie without even reading the reviews was the name of Gunnam Gangaraju. poor effort really. During one of the critical scenes in the movie, one of the audience members, probably 40ish woman, shouted that "power will go off now" in the movie and thats exactly what happens. If audience is able to guess whats going to happen next, then I guess director can't call his script smart. I am sure that this movie won't get more than an average of 4 or 5 in fullhyd viewer's rating.

ADVERTISEMENT
This page was tagged for
Katha telugu movie
Katha reviews
release date
Genelia, Arun Adith
theatres list
Follow @fullhyderabad
Follow fullhyd.com on
About Hyderabad
The Hyderabad Community
Improve fullhyd.com
More
Our Other Local Guides
Our other sites
© Copyright 1999-2009 LRR Technologies (Hyderabad), Pvt Ltd. All rights reserved. fullhyd, fullhyderabad, Welcome To The Neighbourhood are trademarks of LRR Technologies (Hyderabad) Pvt Ltd. The textual, graphic, audio and audiovisual material in this site is protected by copyright law. You may not copy, distribute, or use this material except as necessary for your personal, non-commercial use. Any trademarks are the properties of their respective owners. More on Hyderabad, India. Jobs in Hyderabad.