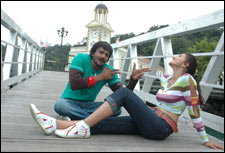 Ramya C / fullhyd.com
EDITOR RATING
3.0
Performances
Script
Music/Soundtrack
Visuals
4.0
3.0
5.0
5.0
Suggestions
Can watch again
No
Good for kids
Yes
Good for dates
Yes
Wait for OTT
Yes
Vaade Kavali gives out a profound message: if you stick to your dumbest beliefs with staunch defiance, 99 of 100 will still think you are an idiot, but the 1 guy left, well, probably you can convince him to marry you.

Latha (newcomer Suhasi) is a girl with a very comfortable life: a loving and affectionate family, no need or inclination to work/earn, no talents to pursue, nor even a dog to walk. In her spare time, she works on a brilliant and erstwhile proven commercial formula: she keeps dreaming of a boy from her childhood => she loves him => she must marry him.

She spends her entire energy dreaming of the boy, though all she knows about this childhood acquaintance of hers is that his name is Abhiram and that he gave her a gold ring as a token of their friendship. On the other hand, Anand (Sairam Shankar) is a guy who pretty much has it all - a rich and unquestioning father, a college which doesn't need him to attend classes, a bunch of ugly friends to make him look pretty, and a successful director for brother (in real life, at least).

Anand spots Latha on a beach and instantly falls for her. When they meet at a wedding, he tries to woo her. He doesn't score well with her, but manages to impress her sister-in-law, who tells him of her fixation with the boy from her childhood.

So Anand acts like he was the kid; Latha, of course, is ready to fall in love with the man of her dreams. Yes, yes, she doesn't realize her childhood crush was called Abhiram and this is Anand - we told you she puts her entire energy into dreaming.

After a couple of love scenes, the sister-in-law breaks it to Latha that Anand and Abhiram are different names and are likely to be different people. She is all heart-broken, breaks up with Anand and starts to think of enrolling in a school to learn spelling. At the same time, the real Abhiram (newcomer Chandrahas) comes to their city from Malaysia. And he too is loony, and thinks that he is in love with Latha.

Soon, Anand meets Abhiram by accident, and realizes he is the guy from Latha's childhood. But before Anand can get Latha to meet him, Abhiram flies off to Malaysia. So they both go searching, and what follows is some blatant borrowing from Hum Dil De Chuke Sanam and Dil Chahta Hai. After meeting Abhiram and making sure that she would not be losing out on anything if she settles with Anand, Latha rushes back to a tearful Anand.

Latha's character is so dumb, you would want to hit her on the head with a club just to see if she realizes it's hurting. She has such contrived ideas about truth and being in love that, well, you want to hit her with that club again. And maybe ask her to start with some Mills & Boons Harlequins.

But obviously her stylists hated her more: she is mostly dressed in clothes right out of the 1990s movies, and there are always 2 strands of hair spiraled like chandeliers on both sides of her face. Honestly, a violently violet lehenga with a 5-inch blouse and 10 pieces of glittering jewelry is not considered casual day wear, and neither does wearing a bindi with a short skirt make you look homely.

Sairam Shankar is pretty lucky - the two people he competes with are worse, so he seems okay. His diction is still not in place, more so when he has to mouth English lines. Chandrahas has little to do except smile and nod. Naresh as Anand's father is good in the little scope he has.

The music by R P Patnaik is nothing to write home about - most songs are fast-paced and give the heroine a chance to wear short clothes. The comedy track with Venu Madhav is pretty useless, and is in no way connected to the rest of the movie.

What is most frustrating is not that the director chose to lift liberal portions from successful Hindi movies - it is rather that he made such a poor job of choosing what movies to lift from! All in all, quite a dumb movie. Your call.
Share. Save. Connect.
Tweet
VAADE KAVALI SNAPSHOT

ADVERTISEMENT
This page was tagged for
Vaade kavali
Vaade Kavali telugu movie
Vaade Kavali reviews
release date
Sairam Shankar, Suhasi
Follow @fullhyderabad
Follow fullhyd.com on
About Hyderabad
The Hyderabad Community
Improve fullhyd.com
More
Our Other Local Guides
Our other sites
© Copyright 1999-2009 LRR Technologies (Hyderabad), Pvt Ltd. All rights reserved. fullhyd, fullhyderabad, Welcome To The Neighbourhood are trademarks of LRR Technologies (Hyderabad) Pvt Ltd. The textual, graphic, audio and audiovisual material in this site is protected by copyright law. You may not copy, distribute, or use this material except as necessary for your personal, non-commercial use. Any trademarks are the properties of their respective owners. More on Hyderabad, India. Jobs in Hyderabad.