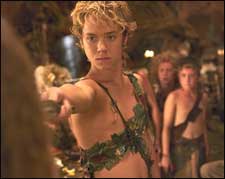 Deepa Menon / fullhyd.com
EDITOR RATING
6.0
Performances
Script
Music/Soundtrack
Visuals
NA
NA
NA
NA
Suggestions
Can watch again
NA
Good for kids
NA
Good for dates
NA
Wait to rent it
NA
Peter Pan is like most other guys - he'd rather get shot at than talk about his feelings, he has a perfect little twit for a best friend, and he refuses to grow up. And it's this last trait that has caught the fancy of all who've read or watched earlier interpretations of J M Barrie's classic children's tale. "All children grow up, except one." Too bad we can't boast the same odds in the adult world. Oh well.

For a 12-year-old, Peter Pan's definitely been around; on Broadway, on TV, in Disney animation, in Spielberg's unremarkable Hook and, at last count, in around two million five thousand and forty-six Michael Jackson jokes. This latest version of the story is not as dark as Hook was, but, thankfully, it isn't as sugar-syrupy as your average children's flick either. The comedy can be a bit tedious, but for the most part, the film walks the line well, with only a few disturbing aberrations.

Set in Victorian England, the story starts at the Darling household, where Wendy (Rachel Hurd-Wood), the oldest, is telling her brothers stories that children actually want to hear, i. e. ones with plenty of fighting and gore. As Cinderella wrestles with pirates and Snow White decapitates dwarfs, Wendy's fame as the best ever story-teller grows and reaches far beyond her home-town, all the way to Neverland. And Peter Pan (an impish Jeremy Sumpter), leader of the Lost Boys tribe on that magical island, is drawn to her window every night, where he listens in rapt attention to the latest of Wendy's spiels.

Although she suspects she's being watched by a levitating stranger, Wendy has other things on her mind. Like an overbearing Aunt Millicent (Lynn Redgrave), who is threatening to turn her niece into a proper 'woman'. The prospect of imminent adulthood fills twelve-year-old Wendy with dread, especially since the first step involves the firing of her beloved nanny, the family's Saint Bernard.

So when Peter Pan finally appears in front of her, she finds his offer hard to refuse. Come away with me, he says, and you can stay twelve forever. And this is how Wendy and her two brothers find themselves flying the night sky in their pajamas, with a strange boy, and his friend, the fairy Tinkerbell (a hyper Ludivine Sagnier), who already hates Wendy's guts for trying to kiss Peter Pan.

Chief among the disturbing aberrations of the movie is the portrayal of the relationship between Peter Pan and Wendy. They're obviously very fond of each other but the 'romance' that results is discomfiting to watch, apart from being a distraction from the main story. Another off-key note is the almost covetous interest that Peter Pan's bitter enemy and adult, Hook, takes in Wendy.

The evil one-armed Hook is played by Jason Isaacs (Lucius Malfoy from Harry Potter), who also plays the role of the ineffectual Mr. Darling. While Hook watches and schemes, Neverland's Lost Boys band adopts Wendy as its mother, while Peter Pan is its father. The band is an adorable tumbling bunch of scruffy boys, who add a serious dash of cute to the film, if not anything else.

Finally Hook and his group of cackling pirates take Wendy hostage, and in the fight that ensues, she sees that Peter Pan is brave and kind, but still a child, and still unwilling to enter the grown-up world. So they must part, and the director handles this in such a way that you feel sad for the lonesome magic boy.

The computer graphics are decent, but what makes the film watchable is the effect of 'real magic' that the cinematographer manages. And the little details like the crocodile that follows Hook around for the rest of his arm, and the sinister mermaids. Watch for an interesting, if not brilliant, spin on a popular bedtime fantasy.
Share. Save. Connect.
Tweet
PETER PAN SNAPSHOT

ADVERTISEMENT
This page was tagged for
Peter Pan english movie
Peter Pan reviews
release date
Jason Isaacs, Jeremy Sumpter
theatres list
Follow @fullhyderabad
Follow fullhyd.com on
About Hyderabad
The Hyderabad Community
Improve fullhyd.com
More
Our Other Local Guides
Our other sites
© Copyright 1999-2009 LRR Technologies (Hyderabad), Pvt Ltd. All rights reserved. fullhyd, fullhyderabad, Welcome To The Neighbourhood are trademarks of LRR Technologies (Hyderabad) Pvt Ltd. The textual, graphic, audio and audiovisual material in this site is protected by copyright law. You may not copy, distribute, or use this material except as necessary for your personal, non-commercial use. Any trademarks are the properties of their respective owners. More on Hyderabad, India. Jobs in Hyderabad.