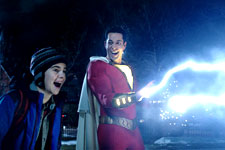 Punarvasu Pendse / fullhyd.com
EDITOR RATING
8.0
Performances
Script
Music/Soundtrack
Visuals
8.0
8.0
8.0
7.0
Suggestions
Can watch again
Yes
Good for kids
Yes
Good for dates
Yes
Wait for OTT
No
Marking a significant break from the darker stories that DC has put forth in the past, Shazam! very astutely sheds the edginess and immense self-importance that plagued the likes of Batman vs Superman. It is a coming-of-age movie within a larger superhero movie. And it manages to look more than just convincing at that - it is a genuinely heartwarming tale that succeeds in making you feel, and making you laugh.

Ultimately, it boils down to what you expect from a superhero movie. DC has shifted away from the darker, grittier narrative styles of its previous films to a more cheerful offering, one that has no qualms in not taking itself very seriously. Frequent chuckles in the movie theatre, and belly laughs at multiple moments, attest to the same. Shazam! is heart-felt, hilarious and disarmingly charming, but most importantly, it is a blast.
Share. Save. Connect.
Tweet
SHAZAM! SNAPSHOT 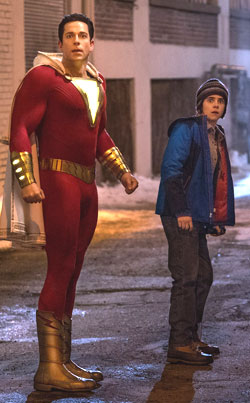 ADVERTISEMENT
This page was tagged for
Shazam! english movie
Shazam! reviews
release date
Zachary Levi, Mark Strong
theatres list
Follow @fullhyderabad
Follow fullhyd.com on
About Hyderabad
The Hyderabad Community
Improve fullhyd.com
More
Our Other Local Guides
Our other sites
© Copyright 1999-2009 LRR Technologies (Hyderabad), Pvt Ltd. All rights reserved. fullhyd, fullhyderabad, Welcome To The Neighbourhood are trademarks of LRR Technologies (Hyderabad) Pvt Ltd. The textual, graphic, audio and audiovisual material in this site is protected by copyright law. You may not copy, distribute, or use this material except as necessary for your personal, non-commercial use. Any trademarks are the properties of their respective owners. More on Hyderabad, India. Jobs in Hyderabad.