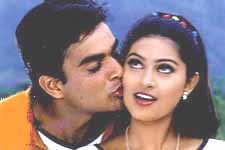 EDITOR RATING
6.0
Performances
Script
Music/Soundtrack
Visuals
NA
NA
NA
NA
Suggestions
Can watch again
NA
Good for kids
NA
Good for dates
NA
Wait for OTT
NA
After the phenomenal success of Sakhi, Madhavan comes back again with Ninnu Choosaaka. He ignites the screen along with Sneha with all the earlier charm, but the film loses its gloss and ends up as a sentimental drama.

The story goes like this: Madhavan is an orphan who comes up the hard way to become a small time singer. He, along with three of his other friends, forms a troupe - Vasanth Melodies - and gives performances in functions to earn a meager income that is hardly enough to make both ends meet. Unable to pay the rent, he is thrown out by his landlord, but with the help of a beggar, Bhikshalu, he lands up as Sneha's tenant.

Prior to that, Madhavan and Sneha have a strange encounter in which Madhavan borrows Rs 50 from her. Not knowing that Sneha is his landlord's daughter, he brags about her house as his house when he goes to give her back the money. She takes it as a light-hearted quip and being neighbors they soon become friends. Sneha even gives him tips on how to come out of his poverty using his singing talent. Taking her advice too seriously, he becomes successful as a singer in the local functions circuit.

With the roti, kapda and makaan taken care of, it is time to repay Sneha for giving some sound advice. So he falls in love with her, only to be shocked at knowing that she is a divorcee. Despite that he expresses his whole-hearted love for her, only to be rebuffed. In a couple of contrived incidents that happen all too sudden, she is taken advantage of for being a divorcee. This makes her realize that Madhavan is the best bet for her. But this time the father is unwilling to let her marry him.

The film is packaged well, especially the first half, with some humorous incidents that happen between Madhavan and his three friends - one deaf, one blind and the other with a female voice. Even later, the encounters between Madhavan and his landlord Manivannan, and between Madhavan and Sneha, provide some light-hearted moments. But the film takes on unexpected turns making it a sentimental drama, which soon robs the audience of its patience. But it does not end up as a bad film.
Share. Save. Connect.
Tweet
NINNU CHOOSAAKA SNAPSHOT

ADVERTISEMENT
This page was tagged for
Ninnu Choosaaka telugu movie
Ninnu Choosaaka reviews
release date
Madhavan, Sneha
theatres list
Follow @fullhyderabad
Follow fullhyd.com on
About Hyderabad
The Hyderabad Community
Improve fullhyd.com
More
Our Other Local Guides
Our other sites
© Copyright 1999-2009 LRR Technologies (Hyderabad), Pvt Ltd. All rights reserved. fullhyd, fullhyderabad, Welcome To The Neighbourhood are trademarks of LRR Technologies (Hyderabad) Pvt Ltd. The textual, graphic, audio and audiovisual material in this site is protected by copyright law. You may not copy, distribute, or use this material except as necessary for your personal, non-commercial use. Any trademarks are the properties of their respective owners. More on Hyderabad, India. Jobs in Hyderabad.