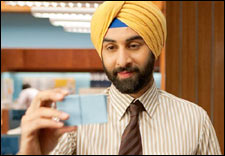 However, there's good news for the romantically optimistic - the value system of Harpreet Singh Bedi (Ranbir Kapoor) is firmly in place. And there's bad news for the impossibly romantic - he still has to go into a grey area to rip apart the black and the white and to prove a point.

Harpreet Singh gets into a sales organization of the most unscrupulous kind, but is callow enough to admire the sales tactics his superiors use. However, one act of his naivetÃ© - when he refuses to bribe a customer - causes his entire office to turn hostile against him, just because he didn't do the done thing.

He decides to outwit his chief by not stooping to his level, and begins a little venture on the side, roping in a few other employees equally frustrated with the supremely insensitive and crooked bosses.

Rocket Singh seems to be the indulgence of an idealist entrepreneur who believes that ethics needn't drive away numbers, but smothers you with a lot of things you don't want to know about a typical sales team. And this has all the makings of anything but a commercial blockbuster.

For one, the theme is mainly for those in the know to appreciate - not enjoy - with its business-to-business setting and all the fuss about targets and review meets. Second, and more important, Rocket Singh is so brooding it might as well have been a Madhur Bhandarkar movie.

There's a bit of wit running throughout, but the first half consists of everything you don't want to see happen to Harpreet - he's relentlessly humiliated by his bosses, colleagues and clients, and his office gangs up in "secretly" throwing paper planes at him (seriously, paper planes??). It is only when he makes his decision that you know this is a plot driven by the hero's intellect. Still, the pacing is too slow to make you excited about the climax.

Rocket Singh succeeds in some detailed characterization of most of those involved, and the actor deliver on par with it. Ranbir Kapoor is going through a phase in which film-makers only stand to lose money if they don't cash in on his talent and star power. His screen presence is formidable, and it's because of him that there's even the lightest shade of cheer in Rocket.

This is not a film in which you'll complain about the screenplay or about the actors. Among the prominent faces are Gauhar Khan, Santosh (as the Hyderabadi, Giri), Naveen Kaushik (as Nitin) and Manish Choudhary (as Puri). Prem Chopra is wasted in a teeny, grandfatherly role, but is a comfort to watch among all the intensity. Shazahn Padamsee has an insignificant role.

The music is entirely a background affair, but is well-composed. The settings are all inside office spaces, but the movie keeps away from the overly brighter spaces and keeps things on the starker, realistic side.

See Rocket Singh - Salesman Of The Year full details
ROCKET SINGH - SALESMAN... USER REVIEWS
ROCKET SINGH - SALESMAN OF THE YEAR USER REVIEWS
1 - 1 OF 1 COMMENTS
POSITIVE  |  NEGATIVE |  NEWEST  |  OLDEST  |  MOST HELPFUL  |  LEAST HELPFUL
Movie Watcher on 13th Dec 2009, 1:19am | Permalink
This film for sure will be liked and admired by the urban community. Really liked watching a clean movile yet again post "Wake up Sid". Good performance by not only Ranbir, but also other charecters, especially the GM of the AYS computer company. A perfect film to watch by a Sales man. May be, this film can also be a part of some Sales Training programs in B-Schools, You Never Know !!! I liked the movie bcz it was decent and has taught many a lession "Numbers are NOT the index of once career". Be it numbers for a child during his studies or be it numbers for a corporate employee to achieve.

ADVERTISEMENT
This page was tagged for
the rocket singh
rocket singh salesman of the year full movie
rocket singh hindi movie
index of rocket singh
Rocket Singh - Salesman Of The Year hindi movie
Follow @fullhyderabad
Follow fullhyd.com on
About Hyderabad
The Hyderabad Community
Improve fullhyd.com
More
Our Other Local Guides
Our other sites
© Copyright 1999-2009 LRR Technologies (Hyderabad), Pvt Ltd. All rights reserved. fullhyd, fullhyderabad, Welcome To The Neighbourhood are trademarks of LRR Technologies (Hyderabad) Pvt Ltd. The textual, graphic, audio and audiovisual material in this site is protected by copyright law. You may not copy, distribute, or use this material except as necessary for your personal, non-commercial use. Any trademarks are the properties of their respective owners. More on Hyderabad, India. Jobs in Hyderabad.