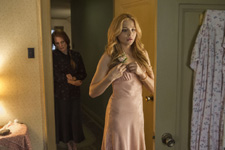 Nupur Barua / fullhyd.com
EDITOR RATING
6.0
Performances
Script
Music/Soundtrack
Visuals
6.0
6.0
5.0
7.0
Suggestions
Can watch again
Yes
Good for kids
No
Good for dates
No
Wait to rent it
Yes
Carrie is the fourth novel that Stephen King wrote, but it was the first to be published. That was in 1974, and over the past four decades, the gory story has caught the fancy of quite a few filmmakers. The 1974 Sissy Spacek version remains the most popular, till date, and it would be only fair to point out that everything else is a remake of the same. With updates, of course. And this year's release is almost frame-to-frame reconstruction of the original.

On to the story. Carrie White (Chloe Grace Moretz) is a nervous young girl in high school. She lives with her mother, Margaret (Julianne Moore), who follows her own version of Christianity and imposes it on her daughter.

Margaret is a great believer in sin and its consequences, so she forces her daughter to be extra pious. Which is why, when Carrie gets her first period in the gym shower, she is ignorant of the changes her body is going through, and thinks she is bleeding to death. Her classmates, led by Chris (Portia Doubleday) and Sue (Gabriella Wilde), taunt her and throw sanitary pads and tampons at her, while recording the incident on their phones.

Carrie is rescued by the gym teacher Rita Desjardin (Judy Greer). When Margaret learns of this, she tells Carrie that this is a punishment for her sins, and locks her in the closet so that she can pray for forgiveness.

Desjardin gives the girls responsible gym detention for a week, but Chris defies her and walks away. The school bans Chris from attending the upcoming prom.

Sue, unable to live with the guilt of what they did, tells her boyfriend Tommy (Ansel Elgort) to befriend Carrie and ask her to the prom. In the meantime, Carrie discovers that she has telekinetic powers. Margaret begins to fear Carrie, convinced that something drastic is about to happen to all of them.

Are Margaret's fears justified? Will Carrie mess up her prom night? And what is Chris doing in a pig farm in the middle of the night? All these and other questions cannot be answered on paper. The last portion of the movie has to be seen to be believed, and (spoiler alert) it is scary. If you have not watched the previous versions of the movie, or not even read the book, this is a climax (albeit a lengthy one) that will remain in your minds forever.

There are some basic differences between the book and this movie. Without going into details, suffice it to say that the makers of this film used the 1976 version as a reference, and not the book. The updates include video sharing and text messages, of course.

However, the director cannot justify remaking Carrie, since she adds nothing new to the classic. Besides, the writers concentrated more on Margaret's parenting skills (or lack of) to set up the situation, which then makes Carrie a more tragic figure than an eerie one (as she was in the novel).

The Principal of the school and Desjardin play a less important role, especially the former. Chris' character is slightly misleading in the beginning, as is Sue's. And Carrie herself is neither meek nor weak - these traits would have made her transformation more dramatic, at least visually. She comes across as arrogant at times, and the change she undergoes is not that effective.

Chloe Grace Moretz will always be compared with Sissy Spacek for this movie. The senior actor terrified the audience, but Moretz begs for sympathy. She is relatively prettier than her predecessor, and therefore not as convincing. Also, her temper and mood swings seem pretty convoluted.

Julianne Moore, on the other hand, is scarier as the mother. She is unpredictable, even when she does not have too many layers as a character. She plays the role with conviction.

Portia Doubleday is successfully maniacal, but it takes some time for her to come to terms with her role. Judy Greer deserved more screen space and a more rounded character.

Given that this is a high school drama, the production design is nothing to write home about. The movie was shot in real locations, but they (Carrie's house, school premises, other locations) do not look they are connected to each other.

The clothes are pretty drab, too, especially the prom gowns. The cinematography and the editing are almost perfect, though. The music is eerie and erratic.

For those who have not watched the original, Carrie is a must-watch. The older generation may still rave and rant about the 1976 movie, though. Stephen King himself endorses the Sissy Spacek starrer, although the makers of this version claim that theirs is a more "faithful adaptation" of the movie. Better still, read the book (it takes patience) and then watch the movie. Either way, acquaint yourself with Stephen King's stories, because they are the stuff that nightmares are made of, and we all love a good scare.
Share. Save. Connect.
Tweet
CARRIE SNAPSHOT 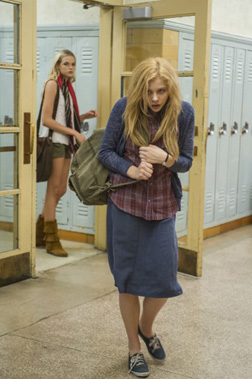 ADVERTISEMENT
This page was tagged for
Carrie english movie
Carrie reviews
release date
Julianne Moore, Chloe Grace Moretz
theatres list
Follow @fullhyderabad
Follow fullhyd.com on
About Hyderabad
The Hyderabad Community
Improve fullhyd.com
More
Our Other Local Guides
Our other sites
© Copyright 1999-2009 LRR Technologies (Hyderabad), Pvt Ltd. All rights reserved. fullhyd, fullhyderabad, Welcome To The Neighbourhood are trademarks of LRR Technologies (Hyderabad) Pvt Ltd. The textual, graphic, audio and audiovisual material in this site is protected by copyright law. You may not copy, distribute, or use this material except as necessary for your personal, non-commercial use. Any trademarks are the properties of their respective owners. More on Hyderabad, India. Jobs in Hyderabad.