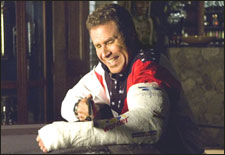 Samrat Sharma / fullhyd.com
EDITOR RATING
7.0
Performances
Script
Music/Soundtrack
Visuals
NA
NA
NA
NA
Suggestions
Can watch again
NA
Good for kids
NA
Good for dates
NA
Wait for OTT
NA
There's much debate about the funny quotient of Will Ferrell. Is his brand of humor absurdist? (I know that's not a word. Yet.) Post-Modern? Is his brand of humor lampooning and simultaneously celebrating the everyday American man and all that he holds dear? Or is it just a no-holds-barred SNL sketch let run amok in running time and production values?

We don't know the answer to these questions, really. Maybe he is all of these things. Or maybe he is just someone who works really hard at making you laugh. His self-esteem, restraint, and all definitions of good taste, are just thrown asunder in his search for that one funny moment.

And even so he doesn't rest. His films are choc-a-bloc with moments just screaming at you to call them funny. There might be as many hits as misses, but you can't doubt his one earnest hope that you'll laugh your guts out.

This time around, he once again joins hands with Anchorman director Adam McKay to present yet another character who's arrogant, clueless, single-mindedly foolhardy, and just gosh darn funny. This is an American everyman, and unapologetically macho (complete with ridiculous tufts of chest hair and manic sideburns).

Talladega Nights: The Ballad of Ricky Bobby (ain't that a mouthful?) is the story of a NASCAR driver who lives by his father's saying, "If you're not first, you're last." Ricky Bobby is the best driver on the circuit, and along with his childhood friend and racing partner Cal (John C Reilly), is the toast of NASCAR. He lives a life of true excess and unashamed hubris, is married to a hot wife, and has two spoilt brats for kids.

One sudden day a driver from Formula 1 is invited to the NASCAR circuit, and he quickly becomes Ricky's arch nemesis. The new driver is an embodiment of the rivalry and differences between NASCAR and Formula 1, seen through the warped eyes of Ferrell and McKay. Jean Girard (Sacha Baron Cohen) is French, gay, drinks macchiato between races, and is utterly (butterly) soft.

The red-blooded pop macho-ism of one world clashes with the sophistication and cultured calm-headedness of the other. The clash between the two cultures and the strength with which these two comedic geniuses (as of this writing, Cohen won the Best Actor Golden Globe for Borat!) spar with each other, playing off each other's sense of timing, makes for most of the humor of the film, and boy, does it work.

When he freewheels during a practice lap and meets with a crash, Ricky is suddenly mentally frightened, which renders him psychologically incapable of racing. Since that is all he knows, his life comes crashing down. His wife and best friend desert him and get married. His career is over.

It's then that the film shows its true colors - it's not just a really funny film ridiculing NASCAR. At its heart it is a sports film, a story of a down-and-out man who learns the value of true sportsmanship, family and humility, and claws his way back with help from friends and family. It is also a glorious celebration of the sporting spirit of racing.

Both these parts - very coherently complementing each other, by the way - are strongly done, and the absurd humor gels with the sports-movie-like soaring flavor ingeniously. Somehow, this is also a problem for the movie, as the time required for both these elements to come together ends up making this a tedious film to sit through when the gags aren't flowing.

Another issue you may have with the film is that while Ricky's and Jean's characters are fully realized, the film decides to shortchange its supporting cast, and while supremely talented, they get little to do other than support the funny moments by Ferrell.

Egostitical? Maybe. Still, Talladega Nights is as good as a popcorn-munching silly comedy can get, and has surprising moments of genuine wit and sharp commentary. The loopy sensibility of the film makes for some darn interesting viewing, if somewhat thumb-twiddling in the middle. There are so many moments of gleeful abandon that some of them are bound to hit your funny cord, although it falls short a few notches of genius. Go for a good time, and nothing else.
Share. Save. Connect.
Tweet
TALLADEGA NIGHTS: THE BALLAD... SNAPSHOT
TALLADEGA NIGHTS: THE BALLAD OF RICKY BOBBY SNAPSHOT

ADVERTISEMENT
This page was tagged for
Talladega Nights: The Ballad of Ricky Bobby english movie
Talladega Nights: The Ballad of Ricky Bobby reviews
release date
Will Ferrell, John C Reilly
theatres list
Follow @fullhyderabad
Follow fullhyd.com on
About Hyderabad
The Hyderabad Community
Improve fullhyd.com
More
Our Other Local Guides
Our other sites
© Copyright 1999-2009 LRR Technologies (Hyderabad), Pvt Ltd. All rights reserved. fullhyd, fullhyderabad, Welcome To The Neighbourhood are trademarks of LRR Technologies (Hyderabad) Pvt Ltd. The textual, graphic, audio and audiovisual material in this site is protected by copyright law. You may not copy, distribute, or use this material except as necessary for your personal, non-commercial use. Any trademarks are the properties of their respective owners. More on Hyderabad, India. Jobs in Hyderabad.