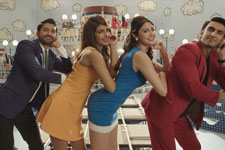 Nupur Barua / fullhyd.com
EDITOR RATING
6.5
Performances
Script
Music/Soundtrack
Visuals
8.0
6.0
6.0
7.0
Suggestions
Can watch again
Yes
Good for kids
No
Good for dates
Yes
Wait for OTT
No
The rich in India can be a delusional lot, completely out of touch with reality, and with a sense of self-importance that comes from being the most important thing in their own lives. The sun rises and sets with them, and when they are bored, they fly their own planes to let out some steam. The rich also never discuss relevant personal issues, especially if they are controversial - confrontation is a no-no. Image is all that matters. Or so Reema Kagti and Zoya Akhtar, writers of yet another movie on privileged people and their lifestyles, would have us believe.

Not that they are always unlikeable. In this Akhtar's latest directorial venture, Kamal Mehra (Anil Kapoor) is a jolly fellow, at least with his friends. He is the cool dude in the 50s club, and he is particularly proud of his achievements as a self-made man. He cannot get over himself. Neither can his wife, Neelam (Shefali Shah), who is so busy keeping up appearances that she does not realise she is binge-eating, even though Kamal keeps reminding her, not so subtly, that she needs to be healthier. Well, his extra-marital affairs, of which nobody speaks, are the reason she is depressed in the first place.

The Mehras are affluent and admired. They also have two children, who have spent their lives living up to the expectations of their parents. Kabir (Ranveer Singh) is 25, and not qualified enough to work in his father's company, but Kamal insists on giving him responsibilities, and that keeps Kabir on the edge. He does not like his job, and would rather fly a plane. Ayesha (Priyanka Chopra) is his elder sister, whose young lover was sent packing a few years ago. She is married to a man of her parents' choice, Manav (Rahul Bose), whom she does not love.

The Mehras have been married for 30 years, and on their anniversary, they want to take a few friends and family on a cruise. Ayesha, who runs her own travel company, has made the arrangements. She is upset that her parents no longer consider her a part of their household, and she is also perpetually tolerant of Manav's inherent chauvinism, cleverly hidden under a veneer of an urban, progressive man, much like Kamal.

The Mehras have other issues, though, and this trip may just save their company, AYKA, if they can persuade the Suds to invest. The Khannas, who are close friends, and also on this trip, are sworn enemies of the Suds, and this may lead to some complications, but Neelam thinks inviting them is worth a risk.

Kabir, unaware that his parents have marriage plans for him, falls in love with a dancer Farah (Anushka Sharma), who is a part of the cruise crew. Ayesha struggles to come clean with Manav about their incompatibility. Neelam and Kamal pretend that they are the happiest couple in the world. And Noori Sud (Ridhima Sud) falls in love with Rana Khanna (Vikrant Massey).

As the ship sails the seas, life becomes more and more complicated with each passing port. The arrival of Ayesha's old flame Sunny (Farhan Akhtar) makes matters worse, and the Mehras wonder if they will ever come out of this cruise unscathed, and if it really matters any more.

The ways of the upper class are strange, says the screenplay. In the process of maintaining appearances, with the paranoia of being judged (since they judge, too), they see interpersonal relationships suffer. The lack of communication, brought about by the need to avoid any confrontation that may lead to change in circumstances, is the main cause of the disconnect, emotional and otherwise, between families and friends.

Once this has been established, the script moves on to yet another social issue - male chauvinism and the patriarchal society. Ayesha is no longer considered a part of the Mehra household since she is married and since her house and family lie elsewhere now. She becomes more of a relative for the Mehras. Even her husband subscribes to this point of view. She is surprisingly, if reluctantly, submissive about this, given that Forbes has listed her as one of the country's top entrepreneurs. She also has to live with the preferential treatment meted out to her brother, although she does not resent it.

Then the script offers a solution - it takes one person in this set up to speak up, and the rest will follow. And that character is Kabir, who knows he is not of much use, but does not let that dampen his joie de vivre.

In fact, while the movie revolves around the Mehras, a product of modern, urbanised, privileged India, it specifically concentrates on the relatively "normal" Kabir. Indeed, the best part of the writing is the unabashed, unapologetic enigma that is Kabir. You immediately relate to him. You root for him, and for the other characters through him. Whether he tries to help star-crossed lovers, or give his parents a reality check, he does so with no holds barred. Otherwise, he is well-behaved, and speaks only when spoken to. It may be a rather simplistic portrayal of a hero who makes a difference, but it does touch your heart.

However, once the characters are introduced and you are told what their problems are, there is nothing much that happens in the story. It is almost as if their lives are in limbo, albeit on board a cruise ship. Much like the leisurely sailing of a cruise ship, the story meanders and comes back to a repetition of previous situations and dialogues. By the time the second half begins, you get a bit restless. The saving grace is the humour, in both the dialogues and in the plot points.

This is a journey, physically and otherwise, that will change lives. What may jar a bit is that the physical space itself is neither identified, nor does it bring about a change. Istanbul is set up as a destination that may change lives, and except for a lunch date between Kabir and Farah, nothing much of import happens there. You expect that Zoya Akhtar would, like in her previous movie Zindagi Na Milegi Dobara, throw in local cultures and events to affect the lives of the characters, but there is none of that. All that the script really says, at the crux of it all, is that parents should let their children do what they want, and support them. Ditto for men. In a particularly relevant dialogue between Sunny and Manav, the latter boasts that he has allowed his wife to work. Sunny retorts with a statement, the gist of which is that control is a delusional yet desirable and practiced by-product of patriarchal notions of proprietorship.

The four main characters playing the family at the centre of it all are depicted by the actors who steal the limelight throughout. The movie belongs to Ranveer Singh, and he is uninhibited in his part as the confused but honest son and brother. He lights up the screen with his antics and expressions, and has a blast doing so.

Priyanka Chopra is impressive, and effective, despite the rather haphazard manner in which her character is written. The sibling chemistry between Ranveer Singh and Priyanka Chopra is one of the best in Indian cinema. They are naturally and fiercely protective of each other, even as they fight over ice cream and other mundane things, and they are wonderfully convincing. And both are entertaining dancers, above all this.

Anil Kapoor in his salt and pepper hair retains the youthful vibrancy that he is known for. He is suitably daft and shrewd, and mostly clueless as Kamal. Shefali Shah is terrific, even though she looks a little too young to be Priyanka Chopra's mother. Her silent expressions speak more than her words, and she brings to life the quintessential composed elite mother who can become hysterical should the need arise.

Rahul Bose is obnoxious, as his role demands. This must have been a breeze for him, since Manav is not that complicated a character - at least, not as much as the characters he usually portrays. Farhan Akhtar has more of a special appearance, and he is subdued and quiet most of the time.

Amongst the supporting cast, Vikrant Massey and Ridhima Sud are a treat to watch. Manoj Pahwa and Parmeet Sethi (back on the silver screen after a while, and looking different) showcase their talent, as do the actors who play their wives. Zarina Wahab looks rather old in this film, but she does a wonderful job of depicting a hypochondriac, polite but insensitive mother-in-law.

The surprise star of the movie is Pluto, the family dog, who narrates the story. He has the right expressions at the right time, and is almost human (which is what Ayesha and Kabir believe, anyway).

Shot mostly on a ship, the movie depends on the set up that it gets on location. The Hagia Sophia and Taksim Square in Istanbul could have been explored for a longer periodh. It is rare to see the interiors of the former in a movie, and although the film is shot in various spaces within it, the enormity of this achievement (shooting inside this heritage building) could have been better exploited. The scenes in the Mehra residence are restricted to a couple of rooms, but they leave an impact as far as production design is concerned. The costume palette, designed by Arjun Bhasin, is fresh and breezy.

The songs are not very impressive, given that Shankar-Ehsaan-Loy are the music directors. They are feet-tapping, but not memorable. The editing of the film, whose length runs to over 170 minutes, could have been crisper. The visuals, on the other hand, are a treat. Carlos Catalan, who has been associated with all of Zoya Akhtar's films, is careful not to be too intrusive with the camera, nor too experimental. He takes you straight into the spaces that the characters are in, and you almost forget that it is a two-dimensional medium that you are watching. He does insert some establishing shots of locations, and of the ship, but he does not overdo it.

Dil Dhadakne Do is not a very massy movie, since the characters and the settings are far removed from the lives of normal people. However, the actors more than make up for that disconnect, and that is why it is a must-watch. The film will not knock you off your socks, nor will it leave a lasting impression in terms of story (because nothing much happens), but it will leave you smiling.
Share. Save. Connect.
Tweet
DIL DHADAKNE DO SNAPSHOT 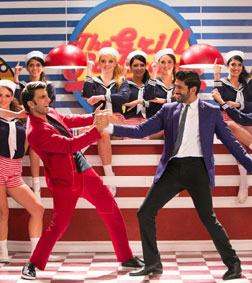 ADVERTISEMENT
This page was tagged for
Dil Dhadakne Do hindi movie
Dil Dhadakne Do reviews
release date
Farhan Akhtar, Ranveer Singh
theatres list
Follow @fullhyderabad
Follow fullhyd.com on
About Hyderabad
The Hyderabad Community
Improve fullhyd.com
More
Our Other Local Guides
Our other sites
© Copyright 1999-2009 LRR Technologies (Hyderabad), Pvt Ltd. All rights reserved. fullhyd, fullhyderabad, Welcome To The Neighbourhood are trademarks of LRR Technologies (Hyderabad) Pvt Ltd. The textual, graphic, audio and audiovisual material in this site is protected by copyright law. You may not copy, distribute, or use this material except as necessary for your personal, non-commercial use. Any trademarks are the properties of their respective owners. More on Hyderabad, India. Jobs in Hyderabad.