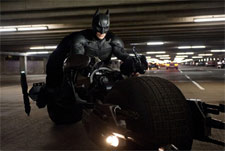 Samrat Sharma / fullhyd.com
EDITOR RATING
7.0
Performances
Script
Music/Soundtrack
Visuals
9.0
5.0
9.0
10.0
Suggestions
Can watch again
Yes
Good for kids
No
Good for dates
Yes
Wait for OTT
No
The Dark Knight Rises is a film at odds with itself. The action is polished and involving, but the characters taking part in it seem hollow; it has intense political themes to talk about, but it never follows through with showing us how it affects people; it has a lot of dead weight in its running time, but, at the same time, seems rushed.

No partnership has raised so many conflicting feelings than the one between David Goyer, the entertaining but hammy writer behind the Blade films, and Christopher Nolan, the moody yet showy filmmaker. The Dark Knight Rises - the culmination of the partnership that began with Batman Begins - finally shows us the difference in their approaches. It's a film that is poorly written but directed with impeccable eye to detail.

At his best - and he is definitely at his best here - Chris Nolan can be an arresting filmmaker, propelling you forward, taking you in with his grand cinematic vision, and delivering an exhilarating ride. This film showcases his growth as an action director, with a thunderous direction wowing us with its breathtaking scope. You will be taken in, enthralled, and blown away multiple times as Hans Zimmer's booming score thuds in your ears. The propulsion of the film is entirely directorial, however, and not narrative.

A relatively light-hearted first half begins with Gotham having enjoyed 8 straight years of peace with the mob under control via the Dent Act, and Batman having since retired. Selina Kyle (she is never once referred to as Catwoman, to the film's credit) breaks into Wayne Manor, when we meet a walking-stick-bound Bruce Wayne, reclusive and somber. Meanwhile Bane, the charismatic terrorist leader from the League Of Shadows (the same group that Batman trained with and destoyed in the first film), has a Rube Goldberg-like plan to destroy Gotham, that he starts pulling off when he steals money from Bruce Wayne by holding up the Stock Market.

Thrown in the mix are commissioner Gordon, who tries to stop him but gets hurt, and rookie cop Blake, who slowly pieces the puzzle together to become the most important character in the film. Supporting Bruce are his wise old mentors who push him closer to Miranda Tate, a young millionaire who wants to invest in Wayne enterprises' fusion energy source, something Bruce is wary of because it may be used as a nuclear bomb.

It's heady stuff, but to Nolan's credit, he mostly keeps all this in check. What is out of control is the writing, that never clarifies the why for most of these characters. Repeatedly we are told of motivations for people, but never shown.

Plot holes aside, the thematic strains also ring hollow. For the longest time Bane seems to be bringing about a revolution - bringing power to the common people and taking it away from the 1%. The problem is that he does this by recruiting homeless people - a troubling thing for the film to say, that all homeless and lower classes are criminals.

Worse, the film never believes in its own politics - we literally don't have a single common man character in the film. And those who actually are proponents of change (Selina Kyle mostly) are shocked when Bane actually pulls his plan off. And when Bane does the thing that Bane is famous for doing from the comics, we are treated to a dull half-hour, during which we get multiple flashbacks and a training montage that does Batman and his motivations a great disservice by breaking the show-don't-tell rule of cinema. Overall, the pacing of the film is real plodding when nothing that happens is a result of any clear motivation.

It's a good thing the actors are up to the job and carry the slower bits of film on their shoulders. Anne Hathaway as Kyle, the cat burglar, is amazing - easily the best thing about the film. She is charming and human, and extremely charismatic. Michael Caine, as always, steals the show, and is once again the emotional center of the film. Joseph Gordon-Levitt, as Blake, has the only full character arc in the film, and he serves up a magnetic and sincere performance, so much so that it could have been called John Blake Begins. Tom Hardy as Bane is stuck using his eyes to emote - which he does well, but the post production audio job on his voice makes him sound very silly at all times - like your English professor talking to a particularly idiotic child.

Thankfully, Christian Bale gets to spend equal amounts of time as Batman and Bruce Wayne, and carries everything about any scene with him in it. As Batman, he is still in desperate need of some Vicks drops, but as Wayne, he pushes the boundaries of what it means to be committed to an ideal. Batman has always been defined by the death of his parents. In this film, he shows the growth we have seen in the last two films, and is defined by what he is willing to do to save Gotham, and why.

The terrific acting is a credit to Nolan, as are the thunderous set-pieces. If your only requirement of this film is that it has some brilliant action with sub textual heft, boy are you in for a treat. In the weirdest and most fantastical Batman film of this "realistic" series of films, Nolan finds new ways of taking us on the roller coaster of entertaining action. Every single action beat is satisfying, and a pure cheese-laden Dharmendra-style street brawl between cops and terrorists is made especially war-like - something only he could do.

Ultimately, the action is so good, the actors so convincing and charismatic, that you are swept away by the spectacle of it all, and leave the cinemas with a large grin on your face. Isn't that what we all wanted? You will ask your self questions like, "but why did he do that?", or "how did he get there?" after you've exited the premises, but you will also never be able to forget the last frame of the film. Flawed as it is, this is still a fitting and extremely artistic final act of a film series that has redefined action cinema. I hope you enjoy your hat being blown away.
Share. Save. Connect.
Tweet
BATMAN 3 - THE... SNAPSHOT
BATMAN 3 - THE DARK KNIGHT RISES (TELUGU) SNAPSHOT

ADVERTISEMENT
This page was tagged for
Telugudubbed. Net dark night rises
batman begins in telugu download
the dark knight full movie in telugu 2019
The dark knight rises full movie in Telugu download
the dark knight download Telugu dub#spf=1585362948747
Follow @fullhyderabad
Follow fullhyd.com on
About Hyderabad
The Hyderabad Community
Improve fullhyd.com
More
Our Other Local Guides
Our other sites
© Copyright 1999-2009 LRR Technologies (Hyderabad), Pvt Ltd. All rights reserved. fullhyd, fullhyderabad, Welcome To The Neighbourhood are trademarks of LRR Technologies (Hyderabad) Pvt Ltd. The textual, graphic, audio and audiovisual material in this site is protected by copyright law. You may not copy, distribute, or use this material except as necessary for your personal, non-commercial use. Any trademarks are the properties of their respective owners. More on Hyderabad, India. Jobs in Hyderabad.