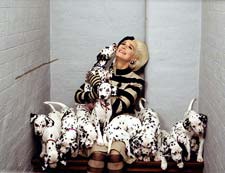 Bhargav Shastry / fullhyd.com
EDITOR RATING
7.5
Performances
Script
Music/Soundtrack
Visuals
NA
NA
NA
NA
Suggestions
Can watch again
NA
Good for kids
NA
Good for dates
NA
Wait to rent it
NA
For guys who joined in late (that is, the ones who unfortunately missed 101 Dalmatians), there's bad news and there's good news. The bad news is, you have missed on a really cute movie in the prequel and have to rely on someone to narrate to you the proceedings. The good news is, we are at your service to do exactly that. And this is the cuter film.

Cruella De Vil (Glenn Close) is a queen who prides herself on wearing fur made of the skins of Dalmatians (101, to be precise) and tries to dognap ('kid'napping dogs would be a little taxing on your logic, right?) the dogs amidst some hilarious misadventures. She is finally imprisoned for her misdeeds. The sequel starts from here.

She is released from prison on reasons of good conduct, and has a new name - "Just call me Ella" - and now she is a real sweetheart who is ready to lead protests against fur fashions. She is dogdom's number one friend. "What?" you say? Her treatment under Doctor Pavlov (David Horovitch) has cured her of her evil ways.

This is lucky for her since a judge (Timothy West) has sentenced her to give all of her money to the 2nd Chance Dog Shelter if she is ever caught dognapping again. Kevin (Loan Gruffudd) runs the shelter, and he and Chloe (Alice Evans), Ella's probation officer, form the story's love interest.

If you suspect that Ella will revert to her nefarious alter ego, you would, of course, be right. Let me say upfront that for whatever reason, probably thanks to director Kevin Lima, 102 Dalmatians is much better than its immediate predecessor, 101 Dalmatians. (Neither, however, is better than the animated original.) Glenn Close, having a ball chewing up the scenery, is terrific, but it's the dogs that make the show.

The best dog of the bunch has to be the eminently lovable Oddball. A Dalmatian who hasn't gotten his spots yet, he is obsessed with them. He suffers from such spot anxiety that Chloe has to spell out the word ("s-p-o-t") when she's around him. This lack of dots gives Oddball lots of opportunities to get into trouble trying to acquire them. The spilled ink from a photocopier's toner cartridge is just one such source of black splotches. Oddball is Mr. Mischief and the dog most likely to appear in the dog endangerment scenes that make the film's G rating a bit questionable.

Coming in second in the cuteness derby is a Rottweiler named Waddlesworth. An unusual dog, he has colorful feathers and a beak, although he doesn't think he can fly. Actually, he's a talking Macaw who just thinks that he is a canine. Giving a single animal the ability of speech makes the story funny without being too silly. In fact, sometimes the simplest scenes of the dogs wagging their tails are so cute that you can't help but break into a big smile. And the sets and the costumes alone can provoke quite a few laughs.

Finally, there is Gérard Depardieu as fur fashion designer Monsieur Le Pelt. Depardieu doesn't have much of a part, but he makes the most of it. Always pronouncing puppies as "poopies", he very much shows why he is the iconic French comedian. When we first see him, he is parading his rotund body down a fashion show runway in leopard hot pants and a leopard-head crotch protector. 102 Dalmatians is first and foremost a movie ripe with physical comedy. The dialogue is treated as almost an afterthought.

Ella's funny tricks to dognap are overshadowed by the escapades of the dogs. One of the best scenes is one in which the dogs go to watch a video when their master is on a date. An ideal film to begin one's summer vacation with, 102 Dalmatians will rarely disappoint you.
Share. Save. Connect.
Tweet
102 DALMATIANS SNAPSHOT

ADVERTISEMENT
This page was tagged for
102 Dalmatians english movie
102 Dalmatians reviews
release date
Glenn Close, Gerard Depardieu
theatres list
Follow @fullhyderabad
Follow fullhyd.com on
About Hyderabad
The Hyderabad Community
Improve fullhyd.com
More
Our Other Local Guides
Our other sites
© Copyright 1999-2009 LRR Technologies (Hyderabad), Pvt Ltd. All rights reserved. fullhyd, fullhyderabad, Welcome To The Neighbourhood are trademarks of LRR Technologies (Hyderabad) Pvt Ltd. The textual, graphic, audio and audiovisual material in this site is protected by copyright law. You may not copy, distribute, or use this material except as necessary for your personal, non-commercial use. Any trademarks are the properties of their respective owners. More on Hyderabad, India. Jobs in Hyderabad.