I See You Review 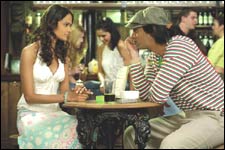 Ravi Mundoli / fullhyd.com
EDITOR RATING
5.0
Performances
Script
Music/Soundtrack
Visuals
NA
NA
NA
NA
Suggestions
Can watch again
NA
Good for kids
NA
Good for dates
NA
Wait for OTT
NA
"I See You", I saw you. And I wish I had waited for some friend to buy the VCD and borrowed it, instead of doing the cross-country trek from Begumpet to Kacheguda and back to see you.

Shot entirely in London, "I See You" is your quintessential multiplex movie. No big-time heroes or heroines, the usual suspects providing support (Boman Irani, Sonali Kulkarni, Kirron Kher), none of the usual high volume music and low coverage clothes, and an unusual storyline.

Raj Jaiswal (Arjun Rampal) hosts the popular desi British TV show, "British Raj". When he is not living on the edge (i. e. risking a sexual harassment lawsuit) with his co-host Dilnaz (Sophie Choudary) or with sundry colleagues, he is to be found living it up in chic London, where he owns a chic apartment, drives a chic car, and is in general a chic guy.

His life takes a bizarre twist when he comes home to find a mysterious woman kind of hanging out in his balcony. Meet Dr. Shivani Dutt (Vipasha Agarwal). Erstwhile resident in the same flat, conscientious doctor, beloved daughter, currently comatose and teetering between life and death in the ICU. Yes, I know, I know. So if she's in coma, what is she doing in Raj's balcony?

It turns out that the individual in the balcony is Shivani's spirit, her roo. For reasons best known to herself (and unexplained to us), only Raj can see, hear or feel Shivani. The reason Shivani is in a coma is that she stumbled across a bad doctor in her hospital involved in shady organ transplant shenanigans, who tried to bump her off in a road "accident" and fell marginally short of succeeding. Dr. Evil now has her under his nose, and is biding his time, waiting for the right moment to turn off her life support systems.

Shivani convinces Raj that she is, in fact, a ghost and not a prank set up by his friend and colleague Akshay Kapur (Chunky Pandey, looking astonishingly like Antonio Banderas!), and enlists his help in getting her out of the predicament she's in, which is what the movie is basically about.

Technically the film is decent, the songs aren't anything to write home about (although "Aaj raat, aaj raat! Hello, hello!" is a foot-tapper). If we are sorry that we didn't get to enjoy the considerable histrionic abilities of Boman Irani, Kirron Kher and Sonali Kulkarni, we should praise the Lord that we were spared the histrionic abilities of Sophie Choudary. Arjun Rampal and newcomer Vipasha Agarwal manage to get some chemistry (and no physics) going, but not enough to salvage the movie.

I See You could've been a good suspense/crime thriller ("The Sixth Sense"), or something emotional and tender ("Ghost"), or a pure fun movie ("Mr. India"). Instead, it ends up being a bit of an American chopsuey film, with a little bit of everything.

The first half actually works - gets you interested and pulls you in. The dialogue is witty, but in a cool, understated way, and plot is engrossing. But in the great tradition of (most) Indian cinema, the opportunities are frittered away in the second. When the film ends, you're left with a vague dissatisfaction, of having watched a decent movie, but one which failed in getting you emotionally involved.

In passing, it should be mentioned that after about, oh, 13 milliseconds from the end, all the annoying logical inconsistencies start screaming at you. Why was it so hard for Raj to prove to the world that Shivani's spirit was flitting around him? Why did they have to have a Hindi speaking Caucasian cop? What curious provision of British law allows you to abduct comatose patients from their beds and not be prosecuted? Etcetera etcetera. Maybe it's just you...
Share. Save. Connect.
Tweet
I SEE YOU SNAPSHOT

See I See You full details
I SEE YOU USER REVIEWS
1 - 3 OF 3 COMMENTS
POSITIVE  |  NEGATIVE |  NEWEST  |  OLDEST  |  MOST HELPFUL  |  LEAST HELPFUL
USER RATING
6.0
9 USERS
Performances
Script
Music/Soundtrack
Visuals
NA
NA
NA
NA
Can watch again - NA
Good for kids - NA
Good for dates - NA
Wait for OTT - NA
Anand Raj on 1st Jan 2007, 7:51pm | Permalink
Hello Aamchi Hyd...it's been a long time since i seen u here...actually am searching for u all these days...the thing is that am presently writing a movie script(a Hindi movie but am presently writing the script in English) and i would like to have you as my working partner...my gut feeling is that you have it in u to become a screenwriter if u give it a chance....i finished 70% of the script already but i definitely need the help of a guy like u to finish the rest of the script or any draft thereafter...and one more thing, i also got the producer...so if u r interested, please contact me at my e-mail st_assisi@yahoo.com or drop a offliner at my yahoo messenger ID 'st_assisi' to work things out...am dead serious and dont even think that it's some kind of prank.....am really really serious about this script...hope u respond.....
RATING
2
Aamchi Hyd on 30th Dec 2006, 2:16pm | Permalink
Was going to watch this, thinking from the promos that it seems a decent original effort. But the review has convinced me that its a frame-by-frame copy of 'Just like Heaven', which is also just an alright effort, with Reese Witherspoon (after her ghastly Legally Blonde sequel) and Mark Ruffalo. Shame on you Indian film-makers, even the multiplexes can't get you to make original stuff, and you can't even copy good work.
RATING
2
Ram V on 30th Dec 2006, 12:43am | Permalink
This is remake of an English movie called Just Like Heaven. Even when they have another movie to refer to, our desi movie makers can't seem to get them right
Ram
RATING
2
LEAVE A COMMENT
fullhyd.com has 700,000+ monthly visits. Tell Hyderabad what you feel about I See You!
MORE MOVIES
Latest Reviews
Jayeshbhai Jordaar
Sarkaru Vaari Paata
Doctor Strange In The Multiv...
Ashoka Vanamlo Arjuna Kalyan...
Runway 34
more
Heropanti 2
Acharya
Kanmani Rambo Khatija
Jersey (Hindi)
K.G.F. Chapter 2
Beast (Telugu)
Ghani
Fantastic Beasts: The Secret...
The Contractor
The Lost City
Contemporary Reviews
Kabul Express
Aap Kaa Surroor
Aag
Dhoom
Pirates Of The Caribbean - D...
more
Speed (Hindi)
Andhrudu
John Tucker Must Die
Trapped (The Killing Jar / B...
Police Story 2 (Telugu)
Run
Hannibal
Shivaji
Talladega Nights: The Ballad...
Random Reviews
Athadu
The Time Machine
Black Hawk Down (Hindi)
Hawa
Shoot 'Em Up
more
Rajadhiraja
The Last Airbender - 3D
Dhada
Ice Age 4: Continental Drift
The Wolverine (Hindi)
Santray
Jyothi Lakshmi
Meelo Evaru Kotiswarudu
Truth or Dare
Hotel Mumbai (Telugu)
SEARCH MOVIES
Dissatisfied with the results? Report a problem or error, or add a listing.
ADVERTISEMENT
SHOUTBOX!
{{todo.name}}
{{todo.date}}
[
ip{{todo.ip}}
]
{{ todo.summary }}... expand »
{{ todo.text }} « collapse
First  |  Prev  |   1   2  3  {{current_page-1}}  {{current_page}}  {{current_page+1}}  {{last_page-2}}  {{last_page-1}}  {{last_page}}   |  Next  |  Last
{{todos[0].name}}

ADVERTISEMENT
This page was tagged for
hindi movie i see you
I See You hindi movie
I See You reviews
release date
Arjun Rampal, Vipasha Agarwal
Follow @fullhyderabad
Follow fullhyd.com on
About Hyderabad
The Hyderabad Community
Improve fullhyd.com
More
Our Other Local Guides
Our other sites
© Copyright 1999-2009 LRR Technologies (Hyderabad), Pvt Ltd. All rights reserved. fullhyd, fullhyderabad, Welcome To The Neighbourhood are trademarks of LRR Technologies (Hyderabad) Pvt Ltd. The textual, graphic, audio and audiovisual material in this site is protected by copyright law. You may not copy, distribute, or use this material except as necessary for your personal, non-commercial use. Any trademarks are the properties of their respective owners. More on Hyderabad, India. Jobs in Hyderabad.