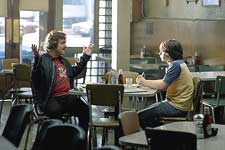 Chinmayi Sirsi / fullhyd.com
EDITOR RATING
7.5
Performances
Script
Music/Soundtrack
Visuals
NA
NA
NA
NA
Suggestions
Can watch again
NA
Good for kids
NA
Good for dates
NA
Wait for OTT
NA
For a movie that calls itself Almost Famous, this one ironically seems to have become one of the really famous ones, what with the Oscar for the Best Original Screenplay and nominations for the Best Supporting Actress and Best Film Editing under its belt. The film, writer-director Cameron Crowe's (of Jerry McGuire) semi-autobiographical tale about a 15-year-old finding his way through a jungle of rock n roll, journalism, adolescence, parental pressure, drugs, sex and love, is an eminently watchable piece free of the usual sentimental mushiness that goes with most adolescent dramas.

Set in the late sixties and early seventies, Almost Famous presents to you William Miller (Patrick Fugit), a boy whose over-zealous single-mother Elaine (Frances McDormand) thinks he's as special they come, or "predominantly accelerated". When William's older sister decides to leave home to see the world, she leaves him her collection of rock 'n' roll, which she promises will change his life. So William grows into adolescence with the tunes and words of Jim Morrison, Bob Dylan, Led Zeppelin and The Who. At 15, he meets Lester Bangs (Phillip Seymour Hoffman), an erstwhile reporter of Creem magazine, who serves as teacher and guide for William's literary ambitions.

When Rolling Stone magazine's music editor, Bob, unaware of William's age, calls and asks him to do a story for them, a thrilled William ties up with Stillwater, an upcoming band on a concert tour. He travels around the country with them and befriends the band's lead guitarist, Russell Hammond (Billy Crudup) and the beautiful Penny Lane (Kate Hudson), a groupie, or, as they call themselves, a Band-Aid. A precocious and already wide-eyed William becomes further wide-eyed and awed at the drugs, music, sex and politics of the band, and becomes intrinsically involved in the unreality and the magic of it all. The rest of the world, the "real world" as Penny calls it, is far away and rather unwelcome here.

Watching the band in such close quarters tells William a bit too much about it - he watches them almost break up, and he is witness to Russell's consequent doping and Penny's hurt at being rejected and used. Too many such truths make the young reporter wonder if journalistic integrity would mean betraying his new friends. And this is only one of the few dilemmas he has to face.

The performances do justice to the script. Patrick Fugit does a terrific job as the half-scared, half-confident 15-year-old William Miller who, as lead singer of Stillwater, Jeff (Jason Lee), says, "was never really a person, he was a journalist". Frances McDormand is brilliant as William's intelligent and fierce mother who knows not whether to hold on or to let go, and the luminous Kate Hudson as Penny Lane and Billy Crudup as Russell do their bit. The dialogues are great too, though a short reading of some of William's work to prove his skill with the written word is conspicuous in its absence.

Both music and writing are passions with the potential to envelop one's life so much so that one becomes blind to the rest of the world. With the music of Simon and Garfunkel and references to Harper Lee early on in the film, you get to travel with William Miller through the two worlds and get to see great movie in the bargain.
Share. Save. Connect.
Tweet
ALMOST FAMOUS SNAPSHOT

ADVERTISEMENT
This page was tagged for
Almost Famous english movie
Almost Famous reviews
release date
Patrick Fugit, Billy Crudup
theatres list
Follow @fullhyderabad
Follow fullhyd.com on
About Hyderabad
The Hyderabad Community
Improve fullhyd.com
More
Our Other Local Guides
Our other sites
© Copyright 1999-2009 LRR Technologies (Hyderabad), Pvt Ltd. All rights reserved. fullhyd, fullhyderabad, Welcome To The Neighbourhood are trademarks of LRR Technologies (Hyderabad) Pvt Ltd. The textual, graphic, audio and audiovisual material in this site is protected by copyright law. You may not copy, distribute, or use this material except as necessary for your personal, non-commercial use. Any trademarks are the properties of their respective owners. More on Hyderabad, India. Jobs in Hyderabad.