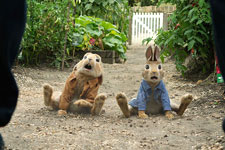 Prerna Prakash / fullhyd.com
EDITOR RATING
7.0
Performances
Script
Music/Soundtrack
Visuals
7.0
7.5
7.0
7.0
Suggestions
Can watch again
Yes
Good for kids
Yes
Good for dates
No
Wait to rent it
Yes
There are some stories that we grow up with, some books that stay with us well past childhood. What Enid Blyton and Carolyn Keene are for pre-teens, Beatrix Potter is for children. We have all read the Tale Of Peter Rabbit when we were young. The book not only tells the delightful tale of a witty rabbit and his family, but also engages us through beautifully drawn illustrations. The film now does the same, and a little bit more.

Peter Rabbit is a self-aware, hilarious and piquant film that hits just the right spots. It follows the tale of a little bunny named Peter (and his family - Flopsy, Mopsy, Cottontail and Benjamin Bunny) who is full of spunk, and has waged war for a garden that he thinks rightfully belongs to him and his family. The film follows the rabbit and his battle with the various human inhabitants of the house, in particular the men of the McGregor clan.

It is a sweet old children's tale that will take you through the traditional morals of most bedtime stories - be good, be kind, don't always think about yourself, give others the benefit of the doubt... - but also talks about how people can change, and the importance of families, love and accepting your mistakes. However, the story has been given some jazzy updates, a la funky music, fun sequences, and a sarcastic, troublemaking protagonist.

The good thing about the movie is how self-aware it is. The problem with most live-action / animated films is that either they are too self-involved with what is going on and do not acknowledge the absurdities that they are portraying, or they go to the other extreme and poke jokes at all the absurd things throughout the story, taking away the charm of it all. Peter Rabbit finds the perfect middle ground in this scenario where some things - like the animals wearing clothes and having house parties (this is, after all, a film for kids) - are overlooked, but a talking bunny and its wily plans are questioned by the human protagonist. A little fantastical, but not too much.

Will Gluck brings to life a world of sarcastic humour, beautiful people and funny takes on life, carrying on his tradition of making movies like Easy A and Friends With Benefits - movies that just stick around in your head. The script of the film is hilarious in its witty repartee and abundant jokes. They take the most common tropes of the animal kingdom and portray them delightfully onscreen, the most enjoyable ones being the rooster who never quits his morning schedule of waking up with the sun and the deer stuck in the headlights. The comedy is not subtle, but if you're coming to a kid's film for subtle, then you're probably in the wrong place.

The bunnies are glorious, but they are not the only ones who hold the fort. After the crusty old McGregor dies, and his crabby young nephew Thomas McGregor (Domhnall Gleeson) inherits the place, the screen is brought to life by the constant antagonism between Peter Rabbit (voiced by James Corden) and him, and Rabbit's tender yet beautifully blossoming love with the neighbour Bea (Rose Byrne), who seems to be fashioned out of the figure of Beatrix Potter, the original writer and illustrator of the Peter Rabbit books.

The film gains an extra point for not having too many humans on screen, because, after all, this is a children's film based in the countryside. But the ones that do get some screentime are brilliant. Not only are they good at acting, with perfect comic timing and flawless reactions, they also wedge their way into your heart because of how simple and true the portrayals of their characters are.

However, the film shows a lot of on-screen deaths, especially for a children's movie. Granted, children should know about the inevitability of death, and the deaths are not gruesome in any way, but it does make the story sad - sad enough to cause a few tears. Also, while it touches on the whole dichotomy of the Country vs. the City, which is brought out beautifully in the character of the younger McGregor, who turns from an irascible, impatient man to a tolerable, likeable character in the span of the hour and a half that he is on the screen, that's all it does - it touches upon the idea, and then lets it go.

The cinematography is beautiful, and as the lush green fields roll past your screen, you will find yourself homesick for a countryside that you've never been to. The animation is whimsical and pretty, staying true to the original artwork that came along with the book. The houses and meadows are idyllic, and the whole setting is something right out of a storybook, which it literally is.

The music however is not the traditional pipe and string orchestra, something that you would witness in an old rendition of bedtime tales. It is upbeat, with popular songs with notes that are just perfect for the situations that they come with. You will find music from your playlist littered along plot - from Linkin Park to Joe Jonas, it's all in there.

Peter Rabbit is not a bad film to spend some good money on. It's colourful and exciting, with a story that we all know but always love to hear again nevertheless. With the summer vacations approaching, this is the perfect movie to take your children to - replete with wit, humour, fun, a little dash of sadness and a whole lotta love, it has just the right ingredients to make a perfect story for kids and adults alike.
Share. Save. Connect.
Tweet
PETER RABBIT SNAPSHOT 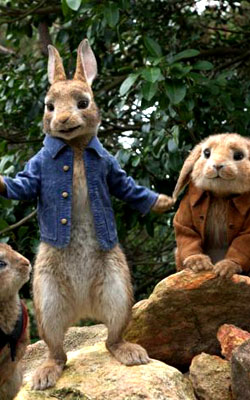 ADVERTISEMENT
This page was tagged for
Peter Rabbit english movie
Peter Rabbit reviews
release date
Domhnall Gleeson, Rose Byrne
theatres list
Follow @fullhyderabad
Follow fullhyd.com on
About Hyderabad
The Hyderabad Community
Improve fullhyd.com
More
Our Other Local Guides
Our other sites
© Copyright 1999-2009 LRR Technologies (Hyderabad), Pvt Ltd. All rights reserved. fullhyd, fullhyderabad, Welcome To The Neighbourhood are trademarks of LRR Technologies (Hyderabad) Pvt Ltd. The textual, graphic, audio and audiovisual material in this site is protected by copyright law. You may not copy, distribute, or use this material except as necessary for your personal, non-commercial use. Any trademarks are the properties of their respective owners. More on Hyderabad, India. Jobs in Hyderabad.