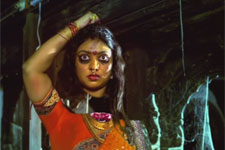 Ajay Kumar R / fullhyd.com
EDITOR RATING
2.5
Performances
Script
Music/Soundtrack
Visuals
3.0
2.0
3.0
2.0
Suggestions
Can watch again
No
Good for kids
No
Good for dates
No
Wait to rent it
No
After watching Bollywood movie Ek Tera Saath (horror, 2016) and Tollywood film Aavu Puli Madhyalo Prabhas Pelli (dark comedy, 2016), this writer placed a bet that no other film in 2016 would epitomize directorial disasters like those two did. But you can apparently never place such bets where Tollywood is concerned, and never take depths for granted.

Eccentric film director Ravi (producer and actor Ravi Babu) is inspired by a series of "true-life events" involving five persons who supposedly turned into vengeful spirits after getting killed by ghosts, and wants to weave these 5 stories together intricately and intelligently into a single horror narrative for an upcoming venture. And so five of his crew members and he, for no particular reason, choose a haunted destination and start playing the Ouija board - an actual board game that supposedly allows you to summon the spirits of the dead.

They summon ghost after ghost, all of who were slain by other ghouls while still alive. The spirits, much to the relief of the crew, have taken a break from their usual kill-spree.

It transpires that the spirits, while they were still humans, pitiably died in circumstances they never intended to be in - who expects to become demon-fodder while they are taking a cosy shower or robbing a family? After the crew's paranormal interaction with the fourth ghoul, Ravi reveals his real motive behind selecting that particular place to play Ouija - to contact the most dangerous spirit of all the five, the fifth in the line-up, and the one that can answer questions from his past that still haunt him. Whether it will narrate its past or bring down hell upon the director and his crew, forms the rest of the mystery.

Neither the comedy nor the horror in Trivikraman may make sense to the average adult. What's even worse is the shoddy direction. It irks you with patched, dented and unconnected story lines. Also, there is barely any spine-chilling horror, which even the average comedy doesn't compensate for.

While Runki Goswami's soundtrack outright violates your eardrums and adds nothing to the already deadpan horror, the cinematography and CG make no effort to terrify you. Each ghost looks like it has been conjured up by someone good at photoshopping memes or by someone in a hurry who just stuck paper cuttings on the actors' faces. The good thing about it is, you at least know they have used CG.

None of the artistes, except maybe Ravi Babu, is worth mentioning for their emoting. But even his serious demeanour won't prompt you to watch this disastrous flick. But the film is just a tad longer than an hour and a half - something you will find yourself thanking the director for.

En fin, this writer is again confident enough to place another bet, as Trivikraman is certainly a new low in horror filmmaking in Tollywood. As for you, you'd better make other plans for this weekend. 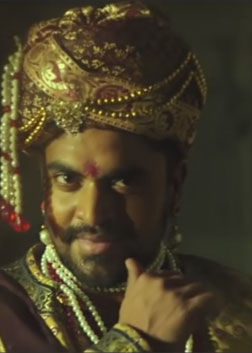 ADVERTISEMENT
This page was tagged for
thrivikraman movie review
???????????? ????? ????
trivikrama ravibabu movie wiki
trivikram movie review
trivikraman
Follow @fullhyderabad
Follow fullhyd.com on
About Hyderabad
The Hyderabad Community
Improve fullhyd.com
More
Our Other Local Guides
Our other sites
© Copyright 1999-2009 LRR Technologies (Hyderabad), Pvt Ltd. All rights reserved. fullhyd, fullhyderabad, Welcome To The Neighbourhood are trademarks of LRR Technologies (Hyderabad) Pvt Ltd. The textual, graphic, audio and audiovisual material in this site is protected by copyright law. You may not copy, distribute, or use this material except as necessary for your personal, non-commercial use. Any trademarks are the properties of their respective owners. More on Hyderabad, India. Jobs in Hyderabad.