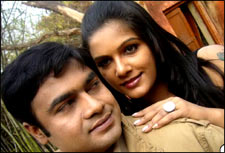 Deepa Garimella / fullhyd.com
EDITOR RATING
3.0
Performances
Script
Music/Soundtrack
Visuals
1.0
4.0
1.0
2.0
Suggestions
Can watch again
No
Good for kids
No
Good for dates
No
Wait for OTT
Yes
Well, it's the thought that counts, we guess.

Unfortunately, it's hard to think of the thought behind the kind of flick that Happy Returns is. Made on an abysmally low budget, with bottom-of-the-barrel jobs by practically everyone on the cast and crew, this is not a movie as much as it is meant to be a Youtube upload.

Which is surprising, given the amount of thought the makers seem to have given its story. The theme is pretty insightful for the rest of its standards, and centres round the noveau riche phenomenon that the IT boom brought with it.

Characters are sourced from the lower middle class of the city, and chief among them is Rahul, a street-smart loaf who wants to make it big in the real estate industry. Rahul is waiting for that one big deal to be struck for his career to kick off - a deal that is set to take place between Raju of the Muthyam Computers fame and a certain Mr. Reddy.

Then, there's his object of affection, the easy-going Anjali. Anjali is among the crop of graduates who figure in the reckless recruitment exercises of software giants - Muthyam (a handle for Satyam, in case you've been living in a cave) being the case in point here. Having run into an obscene amount of money thanks to her salary, Anjali makes momentous decisions with her wealth - she invests in land, and also takes up a personal loan for her sister's wedding.

Meanwhile, lady luck does an about-turn on everyone. Rahul is in troubles that only the real estate business infested with a powerful goon can land you in. Muthyam Computers crashes and Muthyam Raju is sent to jail, leaving Anjali and everyone like her to fend for themselves.

To its credit, Happy Returns gets its concept right. The idea of easy money and artificially-inflated lifestyles, and then the undignified collapse that must logically follow, is mostly just relegated to being a coffee table discussion topic - and to articulate it into a movie is evidently not a cakewalk.

There are also other issues that are brought in, including an ambitious depiction of conversations between Raju and a prominent politician whose children's education Raju is believed to have sponsored.

Where Happy Returns goes wrong is in everything else. The execution - including the performances, the music, the dubbing and the visuals - is so atrocious there can't be an explanation for anything like it. The fact that this is not a high-budget production doesn't justify anything; there are plenty of amateur videos out there on the internet, that are engaging, entertaining and intelligent.

In all, Happy Returns feels a lot like you're being experimented on for a new drug. Watch it if you have the time - and the company - to kill.
Share. Save. Connect.
Tweet
HAPPY RETURNS SNAPSHOT

ADVERTISEMENT
This page was tagged for
Happy Returns hindi movie
Happy Returns reviews
release date
theatres list
Follow @fullhyderabad
Follow fullhyd.com on
About Hyderabad
The Hyderabad Community
Improve fullhyd.com
More
Our Other Local Guides
Our other sites
© Copyright 1999-2009 LRR Technologies (Hyderabad), Pvt Ltd. All rights reserved. fullhyd, fullhyderabad, Welcome To The Neighbourhood are trademarks of LRR Technologies (Hyderabad) Pvt Ltd. The textual, graphic, audio and audiovisual material in this site is protected by copyright law. You may not copy, distribute, or use this material except as necessary for your personal, non-commercial use. Any trademarks are the properties of their respective owners. More on Hyderabad, India. Jobs in Hyderabad.