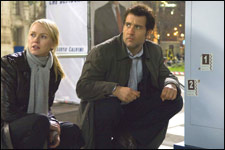 Sudhir Pai / fullhyd.com
EDITOR RATING
4.0
Performances
Script
Music/Soundtrack
Visuals
5.0
3.0
6.0
5.0
Suggestions
Can watch again
No
Good for kids
No
Good for dates
No
Wait for OTT
Yes
The International belongs to a genre of thriller scripts that movie-buffs dream of writing as students. Unfortunately for audiences, an amateur screenplay writer named Eric Singer realized his dream with this Clive Owen starrer.

The International follows the adventures of Interpol agent Louis Salinger (Clive Owen) and Manhattan Assistant District Attorney Eleanor Whitman (Naomi Watts), who are determined to bring to justice one of the world's most powerful banks, the International Bank of Business and Credit (IBBC). The IBBC plays villain, flexing its financial muscle and controlling everything from a few arms deals here and a revolution there. And the only way it chooses to handle opposition, be it external or within its ranks, is by going for the kill, literally. Welcome to the economical slaughterhouse.

While the premise is fairly sophisticated given the current global trends, the execution is a proverbial fossil, much like the '80s pulp we watched on VHS tapes owing to a lack of options. At times, it gives you the impression that the producers were banking on the financial angle to give the movie some mileage.

Clive Owens' role is the epitome of the movie as a whole, pedestrian and incoherent. Louis Salinger is an offshoot of James Bond hit by a credit crunch and Jason Bourne with a flat foot. While the names Salinger and Whitman may ring a literary bell, there is not even an iota of romance or poetry in sight. Even the fiction is not without compromises.

Coming from the director of Run, Lola, Run, The International flatters to deceive. It totally fails to find its footing after an interesting start. And the climax ends up being a showdown between a tired agent and an uninterested head honcho of IBBC. Even if there is a moral somewhere, it is lost in shockingly juvenile dialogues like "He's the bombshell we've been searching for."

Tom Tykwer successfully removes the element of speed from what ought to have been a slick-flick. As a result, the momentum eventually suffers a slow demise with Clive Owen as the centre of gravity. The shootout at the Solomon R Guggenheim Museum and a duel with the Sophia Hagia as a backdrop are easily the brightest moments. Otherwise, The International is an agony that lasts two hours.

The most memorable line that comes to mind is, "The difference between truth and fiction is that fiction has to make sense." Ironically, that applies to the movie, too. With the director choosing to hit on truth while flirting with fiction, it is evidently clear that the movie and its creators shared a very troubled marriage.
Share. Save. Connect.
Tweet
THE INTERNATIONAL SNAPSHOT

ADVERTISEMENT
This page was tagged for
The International english movie
The International reviews
release date
Clive Owen, Naomi Watts
theatres list
Follow @fullhyderabad
Follow fullhyd.com on
About Hyderabad
The Hyderabad Community
Improve fullhyd.com
More
Our Other Local Guides
Our other sites
© Copyright 1999-2009 LRR Technologies (Hyderabad), Pvt Ltd. All rights reserved. fullhyd, fullhyderabad, Welcome To The Neighbourhood are trademarks of LRR Technologies (Hyderabad) Pvt Ltd. The textual, graphic, audio and audiovisual material in this site is protected by copyright law. You may not copy, distribute, or use this material except as necessary for your personal, non-commercial use. Any trademarks are the properties of their respective owners. More on Hyderabad, India. Jobs in Hyderabad.