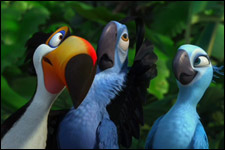 Samrat Sharma / fullhyd.com
EDITOR RATING
7.0
Performances
Script
Music/Soundtrack
Visuals
7.0
6.5
8.0
8.0
Suggestions
Can watch again
Yes
Good for kids
Yes
Good for dates
Yes
Wait for OTT
No
Exotic and different is the currency in which animated films trade. A regular story about regular people (a la Mary And Max) is a rare animated film, and never the mainstream. So it is with Rio, where we travel to Brazil and the colourful Rio de Janeiro (and the even more colourful world of the Brazilian forest birds) in search of some guffaws and a good time at the cinemas.

This film, from the makers of Ice Age, is exactly that - gone is even a pretense to make a film that serves any purpose other than commercial. This is an unabashedly masala animated film with some broad humour, breathtaking set-pieces, and celebrity voice-casting. Good thing that it is still entertaining as all heck.

We begin in the said colourful Brazilian rainforests with Blu (The Social Network's Jesse Eisenberg, playing a nerd even in voice form), a blue macaw who is stolen and sold across to Minnesota, where a young girl Linda (Leslie Mann) takes care of him and pampers him no end. After a few years in comfortable captivity, comes the beckoning of destiny.

A Brazilian scientist Tulio (Rodrigo Santoro) arrives on scene to explain that Blu is the last male of his species, and he needs to go back to Brazil and mate with the last female of his species. After much coaxing, we end up back in Rio with Blu and a spirited Jewel (Anne Hathaway), the female blue macaw in a cage. Jewel's only interest is escape, and Blu wants to live in the comfort of the cage - something that puts them at odds with each other.

As they are bird-napped together by smugglers, which goes awry fast, they find themselves chained to each other, with Blu having never learnt to fly, and the adventure ensues.

The Rio that Carlos Saldanha creates is beautiful and majestic, with some vistas shot the way only animated films can be - with extreme love and through every possible angle. The art itself is quite colourful and evocative, though very derivative of the work of contemporaries. Pixar-level imagination and creativity this is not.

However, the film is often funny and mostly easy on the eyes. The acting is of decent caliber, too - the celebrity overload distracts more than it enhances the appeal, but some of the cast, including Eisenberg and Hathaway, pull their weight remarkably. I'd be remiss to not mention Jemaine Clement in his role as Nigel - he is completely hilarious and gets the best lines in the film. He is the reason adults watch the film (the poop and butt jokes are likely what the studio thinks the kids want). Tracey Morgan as Luiz the dog is unbearable, and despite my love for 30 Rock, I wished he wasn't around at all.

So. Rio. It's funny, but not heartfelt. It's lovely to look at but not wholly original. A likeable if forgettable animated film is more than could be expected in this season, and it's welcome for it.
Share. Save. Connect.
Tweet
RIO - 3D SNAPSHOT

ADVERTISEMENT
This page was tagged for
Rio - 3D english movie
Rio - 3D reviews
release date
Leslie Mann, Jesse Eisenberg
theatres list
Follow @fullhyderabad
Follow fullhyd.com on
About Hyderabad
The Hyderabad Community
Improve fullhyd.com
More
Our Other Local Guides
Our other sites
© Copyright 1999-2009 LRR Technologies (Hyderabad), Pvt Ltd. All rights reserved. fullhyd, fullhyderabad, Welcome To The Neighbourhood are trademarks of LRR Technologies (Hyderabad) Pvt Ltd. The textual, graphic, audio and audiovisual material in this site is protected by copyright law. You may not copy, distribute, or use this material except as necessary for your personal, non-commercial use. Any trademarks are the properties of their respective owners. More on Hyderabad, India. Jobs in Hyderabad.