Planet Of The Apes (English) Review 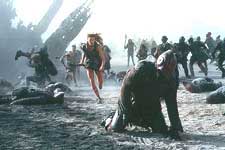 Smriti Kashyap / fullhyd.com
EDITOR RATING
5.0
Performances
Script
Music/Soundtrack
Visuals
NA
NA
NA
NA
Suggestions
Can watch again
NA
Good for kids
NA
Good for dates
NA
Wait for OTT
NA
The king of all kongs is finally here - in the form of Tim Burton's 'Planet Of The Apes'. If you saw the original way back when you were a kid and had a howl at their corny plastic masks, then you better be prepared for some nifty simians here who not only write with their legs and have their own armies, but also play cards with aces up their sleeves.

Circa 2029, Leo Davidson (Mark Wahlberg), in his pre-anti-ape-revolt days, is an US Air Force guy who trains primates to fly aircraft. Whatever for is indeed a question. Anyway, one of the aircraft with a chimp named Perciles gets lost in space. So our hotshot pilot Leo disobeys orders and launches into a space probe of his own. Armed with a glitzy spacecraft straight out of Star Wars, he sets out into a space odyssey 2029.

As usual the craft goes on the blink and he crash-lands into an alien planet which looks suspiciously like Nevada. This is where he gets picked up by the simians and finds himself in mucho trouble as he lands in the paws of apes who enslave humans.

Leo finds himself in the company of leggy ape-hater Deana (Estella Warren) during his moments of slavedom, before being bought by human rights activist (hee hee) Ari (Helena Carter), an ape who has a soft heart under her hirsute exterior. She takes in Leo and Deana, and this marks the beginning of the interspecies love triangle.

Plastic face Leo and blank beauty Deana soon find themselves incurring the wrath of a hard-line homosapien hater General Thade (Tim Roth), who wants to obliterate the human species on his planet. Thade and his right hand gorilla Attar figure that Leo's defiant attitude will fan the anti-human sentiment in the planet and thus lead to the military extermination of the pesky humans. All these thoughts emanating from the brains under the monkey suit.

Unaware of all this monkey business, Leo tries to get back to his home planet. He is assisted by a three others - the love interest, the third vertex of the love triangle and a comic relief provider. A couple of unreal situations later, Leo finds himself face to face with the entire ape army that's all out to get him. Some glitzy pyro-technics and eye candy old, we find ourselves subject to a series of clichés, and Leo is off again hurtling towards the safety of earth.

Which leaves us with about 5 seconds to prepare for the finale of the movie. The finale was supposed to be the piece de resistance of the film - only, we have been there and seen that so many times, it fails to impress. What was supposed to be a Twillight Zone-esque ending turns out to plop like unset jelly.

You are left gaping at mile-wide holes in the script and feel shortchanged at the end of it all. There is nothing new and thrilling about this over hyped piece of eye candy. For the performances, seeing Mark Wahlberg as an astronaut makes you wonder if the casting director's imagination got stretched a wee bit. I thought you needed brains and stuff like that to be one. Anyway, what sort of a pilot/astronaut goes zooming into hyperspace to fetch a lost chimp? It's great fun to see him squirming under the lovey dovey looks of Ari the chimp, though.

Helena Bonham Carter as Ari the ape looks suspiciously like Michael Jackson. The makeup is fantastic, and she manages to bring out her expressions from under the monkey mask. She bats her eyes, looks coyly and murmurs softly through the movie, all the while facing stiff competition from cave girl Estella Warren in her body baring 'one million BC costume'.

Yet, it is the Dolby digital-sounding, evil General Thade (Tim Roth) that is the star of the show. He has to be the most terrifying chimp in movie history, and watching his performance makes you take on a whole new respectful outlook towards those chimps in the zoo. There are about a hundred other extras in the movie who also deserve special mention for having very human problems like bad hair days and headaches, and who also, much like us, wear frilly nightdresses.

The makeup is outstanding, as we no longer have that dime store look about the gorilla masks. And these actors in nonhuman roles, though buried in layers of makeup, still have individualism about them, which was missing in the original. There seems to be a major amount of money spent on trampolines and springs, though, as we keep seeing apes hurtling all over the place as if just shot out from a canon.

Apart from such non-important facts, the movie can at best be described as a brainchild of Tim Burton's imagination. This is his first movie after Edward Scissorhands (remember how you howled when the cops arrest Ed?). Burton and his long time associate Rich Heinrich have managed to create an authentic look about the film, apes and all. The makeup incidentally took up a huge amount of time, with sessions lasting up to 4 hours per person. Which makes me wonder why Wahlberg wasn't chosen to play an ape - he would have saved a lot of time given his already extremely dangerous resemblance to the primates.

All in all, despite the flaws of the script, the movie is well acted and beautifully shot besides being well costumed. It is obviously superior to the original, but lacks the content of the former. But then, since when have we been looking towards Hollywood for intellectual stimulation? So just forget all the heavy stuff, put your gray cells to rest, grab a bag of popcorn and enjoy the best 2 hours of nonsense you'll see this year.
Share. Save. Connect.
Tweet
PLANET OF THE APES... SNAPSHOT
PLANET OF THE APES (ENGLISH) SNAPSHOT

ADVERTISEMENT
This page was tagged for
Planet Of The Apes (English) english movie
Planet Of The Apes (English) reviews
release date
Mark Wahlberg, Helena Bonham Carter
theatres list
Follow @fullhyderabad
Follow fullhyd.com on
About Hyderabad
The Hyderabad Community
Improve fullhyd.com
More
Our Other Local Guides
Our other sites
© Copyright 1999-2009 LRR Technologies (Hyderabad), Pvt Ltd. All rights reserved. fullhyd, fullhyderabad, Welcome To The Neighbourhood are trademarks of LRR Technologies (Hyderabad) Pvt Ltd. The textual, graphic, audio and audiovisual material in this site is protected by copyright law. You may not copy, distribute, or use this material except as necessary for your personal, non-commercial use. Any trademarks are the properties of their respective owners. More on Hyderabad, India. Jobs in Hyderabad.