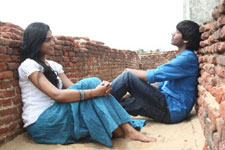 Deepa Garimella / fullhyd.com
EDITOR RATING
3.0
Performances
Script
Music/Soundtrack
Visuals
6.0
3.0
4.0
6.0
Suggestions
Can watch again
No
Good for kids
No
Good for dates
No
Wait for OTT
Yes
Sometimes, after a surreal conversation, it's hard to know what hit you. Or why it hit you. Or why you were in the way. Preminchali is one of those experiences. Basically an overly fervent morality tale for people (read: "kovvekkina" youngsters), the movie leaves you wondering about all the life choices that culminated in leading you to watch it.

It's a story that unfolds like a bad dream. Karthik (Santosh) and Shwetha (Manisha Yadav) are college kids who fall in love with each other. Thanks to an Araku Valley outing and a "chese vayasulo thappu chesthe thappu ledu" attitude, Shwetha gets pregnant. Panic ensues, and her gang of friends tries to get her an abortion, but that doesn't work out.

One mandatory puking-in-backyard-at-home scene later, her mom puts two and two together and realizes what her daughter has been up to. Her parents are scandalized and shattered. While they attempt to get the couple married, the boy's parents want her to get the foetus aborted, and would rather have everyone forget the whole thing ever happened.

But now, it's too late for an abortion. Things escalate and get ugly, with the families finally having a shouting match on the streets. Unexpectedly, even Karthik and Shwetha get sick of each other, and break up.

Shwetha delivers the baby, which her father promptly gives away to an orphanage. There's a depressing song that shows us how the toddler is left uncared for in the rather impoverished orphanage. Two years later, Karthik and Shwetha are dating other people. The film ends with a long, oversimplified disparaging moral message by producer Suresh Kondeti, against casual sex.

What's nice about Preminchali is that they wind it up in less than two hours. It was dubbed into Telugu from Tamil, and is a rather intense movie. We don't see it attracting hordes of people who want to have fun.

The film is sensible in some of its aspects, especially in how it conveys characters' reactions to situations. However, things like an educated middle-class family abandoning an illegitimate child out of shame, aren't convincing.

The acting isn't much to speak about. The youngsters - except the female lead - are bad and amateurish at it, while the others are fine. Manisha Yadav is convincing as the girl caught in a nightmare. Her character, Shwetha, is the one most pained in the story. Tulasi's over-action, for once, is justified, since she effectively portrays how a mother would react to her daughter's illegitimate pregnancy.

The movie has been shot quite well, and is pretty pleasing to look at. The background music is great, but for the songs, Yuvan Shankar Raja, seems to have picked tunes out of his trash can.

The only reason you'd watch it is if you're the projector guy. Skip this one.
Share. Save. Connect.
Tweet
PREMINCHALI SNAPSHOT 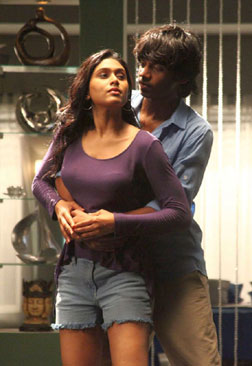 ADVERTISEMENT
This page was tagged for
Preminchali telugu movie
Preminchali reviews
release date
Santosh, Manisha Yadav
theatres list
Follow @fullhyderabad
Follow fullhyd.com on
About Hyderabad
The Hyderabad Community
Improve fullhyd.com
More
Our Other Local Guides
Our other sites
© Copyright 1999-2009 LRR Technologies (Hyderabad), Pvt Ltd. All rights reserved. fullhyd, fullhyderabad, Welcome To The Neighbourhood are trademarks of LRR Technologies (Hyderabad) Pvt Ltd. The textual, graphic, audio and audiovisual material in this site is protected by copyright law. You may not copy, distribute, or use this material except as necessary for your personal, non-commercial use. Any trademarks are the properties of their respective owners. More on Hyderabad, India. Jobs in Hyderabad.