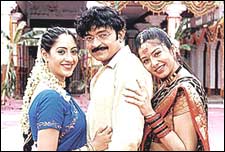 Donald Rumsfield declares: "India might be next. They've got Ayudham."

Osama backs down, "We don't intend on war to destroy people. You got your own methodology."

And in sports: Olympic Association to think seriously about giving training in love games, especially those involving geometric shapes such as triangles.

Now the news in detail:

THE US SECRETARY of Offence Donald Rumsfeld declared that India might be next on his hit list since it got "Ayudham". Rumsfeld said, "Ayudham in Telugu means a weapon. And our policy says we have to remove it. Though probably it's just a Telugu movie with a certain Siddhartha (Dr. Rajashekhar) guy trying hard to show off his misanthropy by ending the enmity between two factionist families in his village and saving them a lot of bloodshed. This is not the only plot; there are others which will be discussed later under the other headlines."

The whole world is now waiting for a response from the Indian authorities, especially since Rumsfeld said that "probably" the ticket foils for this movie are chemical weapons and "probably" the theaters showing this are used for nuclear explosion testing. The only Indian journo present in the conference, though, did not mind the ban on "Ayudham". He seemed ecstatic, euphoric and other such things, saying his family need not suffer through such agonies week after week.

THE EVER ENIGMATIC Osama Bin Laden backed down from his 'jihad' on India. In a special interview smuggled illegally from All Jal-Jeera channel, he vociferously whispered "Kambhaqth ishq hai jo, saran jahan hai woh." Our translator tells us that it means, "We don't intend on war to destroy people. You got your own methodology. Like watching Telugu flicks like Ayudham. Even an Apollo 13 spacecraft colliding into the Charminar cannot possibly create such catastrophe as this movie. We appreciate the filmmaker's having squeezed in so many imbecile subplots into the film that it becomes impossible for a reviewer to narrate 'the' story. Among these subplots, I sincerely approve of the killings by Siddhartha, who hunts down the people that killed his sister and injects chemicals into them."

AND NOW, COMING to the news that will have all you hot mamas drooling. Even though it might only be the kind of drool when one is snoring! The south sex-bomb, the man, the champion, Vijaykanth, has finally been ousted from his title of 'Grisly and Ghastly'. Dr. Rajashekhar with his hair-do in Ayudham is the strongest contender to the title with many other debutant kids from Tollywood gaining momentum by the minute. This means that the Tamil superstar for the first time is to be humiliated by our very own Telugu heroes. Yippeeeeee!

THE WHITE HOUSE has finally approved of the bill that allows Indian actresses to be trained to become interns in the White House. First on the list are Sangeetha and Gurnal Chopra who played in Ayudham displaying all the talents needed for an intern. Monica Lewinsky is to teach them the tricks of the trade. But the male actors from Ayudham cannot run for the presidential post since the President should be an outstanding actor and none of them even come close.

AND NOW FOR some sports news: Following the despicable performance by our actors in triangular love games, the Indian Olympic association has decided to step in and teach them the ABCs of these games. Moreover, they intend on doing this thorough dope-testing on the makers of films like these 'cos there is absolutely no logic or sense in them even though they form an entire sub-pot. Further, they intend on giving the filmmakers some dope in good sense and sensibility.

That's it for the news at this hour - and due to the casual leave of our weatherman, there will be no weather today! Have a good day and we'll see you in the next bulletin.
Share. Save. Connect.
Tweet
AYUDHAM SNAPSHOT

ADVERTISEMENT
This page was tagged for
Ayudam movie story
Ayudham telugu movie
Ayudham reviews
release date
Dr. Rajashekhar, Sangeetha
Follow @fullhyderabad
Follow fullhyd.com on
About Hyderabad
The Hyderabad Community
Improve fullhyd.com
More
Our Other Local Guides
Our other sites
© Copyright 1999-2009 LRR Technologies (Hyderabad), Pvt Ltd. All rights reserved. fullhyd, fullhyderabad, Welcome To The Neighbourhood are trademarks of LRR Technologies (Hyderabad) Pvt Ltd. The textual, graphic, audio and audiovisual material in this site is protected by copyright law. You may not copy, distribute, or use this material except as necessary for your personal, non-commercial use. Any trademarks are the properties of their respective owners. More on Hyderabad, India. Jobs in Hyderabad.