Who Am I? Review 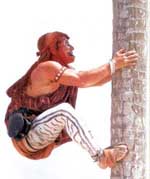 Avishek Gupta / fullhyd.com
EDITOR RATING
7.0
Performances
Script
Music/Soundtrack
Visuals
NA
NA
NA
NA
Suggestions
Can watch again
NA
Good for kids
NA
Good for dates
NA
Wait to rent it
NA
Certainly not advisable for the weak-hearted, but heavily recommended for their kids and for other action lovers! Tremendously fast paced, with death-defying stunts and full of breath-taking escapades and some incredible car chases, this is typically everything you'd expect from a Jackie Chan pot-boiler - and some more.

The story begins with Chan finding himself in a South American tribal village, where he befriends the tribal folks and gets back to mainland New York with the help of an inter-continental car racer who develops car problems during a cross-continental rally. But getting out of that village is the least of his problems, as he's totally forgotten who he is and how he got there. All he knows is that the FBI and the CIA are out for his blood, and he hasn't the foggiest notion why. What follows is an incessant chase for the hunted by the hunter.

Teaming up with a reporter, Chan tries to search for his history. His search leads him to a high-profile company run by a multi-millionaire, who, along with a big-wig of the CIA, has begun the production of a highly unstable alloy, which on the slightest impact gives release to such huge energy that nuclear bombs would seem firecrackers in comparison. Also, he was part of the original crew that had been sent by the CIA to rescue this alloy from the hands of a terrorist team, where a CIA goon schemed and killed all the participants of the strike once the mission was accomplished. Of course, this guy keeps the secret alloy for his own big plans, and Chan is the only survivor of this saga, but with a lost memory.

Incredible action sequences, performed with unbelievable expertise, once again demonstrate just why this action hero is rated so highly. Seemingly impossible stunts done with an in-the-nick-of-time precision are the mainstay of the feature. Especially noteworthy is one where Chan climbs up a tree barehanded with a fiery lion close at his heels, with its paws missing Chan my millimetres as he perches himself right on the peak of the tree. The car chases are breathtakingly shot and have your attention riveted.

Although the plot is not handled very well and at times easy comprehension is sacrificed to the fast pace of the movie, the action keeps you enthralled just like in all other Jackie Chan flicks. And what makes all this stunning is the knowledge that there is no play with graphics - all stunts are original. As the master of stunts himself once pointed out, "There are no special effects in my movies - I myself am the special effect!"
Share. Save. Connect.
Tweet
WHO AM I? SNAPSHOT

ADVERTISEMENT
This page was tagged for
who am i movie in english
who am i movie
Who Am I? english movie
Who Am I? reviews
release date
Follow @fullhyderabad
Follow fullhyd.com on
About Hyderabad
The Hyderabad Community
Improve fullhyd.com
More
Our Other Local Guides
Our other sites
© Copyright 1999-2009 LRR Technologies (Hyderabad), Pvt Ltd. All rights reserved. fullhyd, fullhyderabad, Welcome To The Neighbourhood are trademarks of LRR Technologies (Hyderabad) Pvt Ltd. The textual, graphic, audio and audiovisual material in this site is protected by copyright law. You may not copy, distribute, or use this material except as necessary for your personal, non-commercial use. Any trademarks are the properties of their respective owners. More on Hyderabad, India. Jobs in Hyderabad.