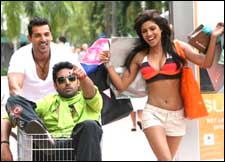 Samrat Sharma / fullhyd.com
EDITOR RATING
6.5
Performances
Script
Music/Soundtrack
Visuals
8.5
6.5
6.0
8.0
Suggestions
Can watch again
No
Good for kids
No
Good for dates
Yes
Wait for OTT
Yes
So it has come to this - an entire film based on two guys pretending to be something they are not, with no other subplot. It's almost as if Bollywood never outgrew the Rishi Kapoor era. The whole Internet is abuzz with it, so let me clarify it outright - yes, Tarun Mansukhani's Dostana is the 2-hour version of the Kantaben gag from Kal Ho Na Ho.

Two straight men (Bachchan and Abraham) pretend to be gay for the benefit of a well-meaning land lady (Sushmita Mukherjee), fall for her hot-as-hell niece (Priyanka Chopra), and then spend the rest of the film living up to the lie. If you ignore the gay angle, and one really should, the film has hardly graduated from movies where Rishi Kapoor would pretend to be a woman or Rakesh Roshan would pretend to be a cop, and hilarity, or lack thereof, would ensue.

With nary a subplot or murder mystery in sight, this masala feature is then, plot wise, a few notches below the oldies. This leaves with us its novelty of being a "gay" film. It's not. It's a terrible affront to gay people, and portrays them as you'd expect - waving hands, speaking in faux effeminate voices, and prone to giggling fits. ClichÃ© central, then. Hardly the stuff of comedy gold, but hey, if Bollywood gives you lemons, let's see if we can't make some nimboo-paani.

Which brings me to the actual point of the whole review - the film is actually fun. Despite the vacuous plot, the broad stroke characterization, and the completely irreverent style of the film, Dostana manages to bring out a grin or two. Tarun Mansukhani has written some witty dialog, and albeit peppered with some extremely ham-handed ones, shows incredible maturity in the language of script beats and pacing.

It's helped by a supremely buoyant cast that won't take no for an answer when it asks you to smile. John Abraham has a hidden flair for comedy, and his timing has only improved after Garam Masala. He is having way too much fun, and it shows in the disbelieving mischief that pervades his entire performance. And Abhishek has a sense of cool confidence about him that was missing in the last few films he did. This breaks through in a performance that revels in being broad and loud. This is clearly not his element, but he gives it his all, and comes out trumps.

Priyanka's 2-fold job to look hot and be vulnerable is accomplished the moment she enters the screen. Looking like a million bucks - and knowing it - she is at once a confident good-looking babe and a wide-eyed girl who has no idea her two buddies are straight.

Thrown in the mix is a supporting cast that hams its way through, but keeps with the tone of the film outright. Clearly Mansukhani has a straight head on his shoulders - no pun intended - and despite the plebeian handling of the subject matter, is ever aware of what a scene requires, and his competence in pacing a shot selection brings to this comedy an air of slickness.

This was never meant to be a serious pondering on homosexuality, and being a mass market comedy does give it some leeway, which is a relief, because the movie does what it set out to do best - it makes you laugh, it parades hotness in front of you (for all orientations), and it creates an atmosphere of light-hearted fun that it maintains until you exit.

Despite Karan Johar's best claims, this is not good clean fun, neither is it a new age comedy. This is extremely aged wine in a shiny new bottle, but what helps matters is that the old still is funny when presented as new, simply because of a witty screenplay and a supremely confident cast. You won't miss a thing if you don't go watch it, but if you do, Karan Johar's adieu to the â€˜K' fixation isn't the one to disappoint.
Share. Save. Connect.
Tweet
DOSTANA SNAPSHOT

See Dostana full details
DOSTANA USER REVIEWS
1 - 1 OF 1 COMMENTS
POSITIVE  |  NEGATIVE |  NEWEST  |  OLDEST  |  MOST HELPFUL  |  LEAST HELPFUL
USER RATING
6.0
1 USER
Performances
Script
Music/Soundtrack
Visuals
6.0
6.0
6.0
6.0
Can watch again - Yes
Good for kids - Unsure
Good for dates - Yes
Wait for OTT - No
Krishna on 11th Dec 2008, 9:33am | Permalink
Good effort from Bollywood to at least try and break the mould from the run-of-the-mill comedy/romantic mush films. Though it's not a great entertainer or anything, worth 1 watch

ADVERTISEMENT
This page was tagged for
Dostana hindi movie
Dostana reviews
release date
Abhishek Bachchan, John Abraham
theatres list
Follow @fullhyderabad
Follow fullhyd.com on
About Hyderabad
The Hyderabad Community
Improve fullhyd.com
More
Our Other Local Guides
Our other sites
© Copyright 1999-2009 LRR Technologies (Hyderabad), Pvt Ltd. All rights reserved. fullhyd, fullhyderabad, Welcome To The Neighbourhood are trademarks of LRR Technologies (Hyderabad) Pvt Ltd. The textual, graphic, audio and audiovisual material in this site is protected by copyright law. You may not copy, distribute, or use this material except as necessary for your personal, non-commercial use. Any trademarks are the properties of their respective owners. More on Hyderabad, India. Jobs in Hyderabad.