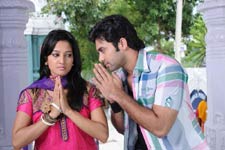 Deepa Garimella / fullhyd.com
EDITOR RATING
3.5
Performances
Script
Music/Soundtrack
Visuals
6.0
3.0
4.0
4.0
Suggestions
Can watch again
No
Good for kids
No
Good for dates
No
Wait for OTT
Yes
Vasool Raja is one of those films that could not have turned out better. It's just that this is how the product was always meant to be. Mediocre. Boring. Occasionally witty. Incredibly soporific. But once you think about the larger picture, and tell yourself that Vasool Raja, like every movie, has probably created gainful employment for hundreds of people while being made, you don't feel very uncharitable towards it.

Good actors appear disproportionately talented in downers like this one, and so it is with Navdeep, whose zingy effervescence makes the rest of the film seem disproportionately lifeless. He makes this a movie that you cannot be totally unkind to, despite its inane plot and below-average quality.

He doesn't do anything out-of-the-ordinary here, though. Navdeep plays Vasool Raja, a small-time conman who the cops haven't been able to catch, but whose smarts have impressed the top cop (Srihari) so much that the latter wants his help in busting a major drug racket.

We are told that Srihari is an angry police officer, as is obvious from some weird visual metaphor thing he takes us through every once in a while, all dressed up in puli vesham, to feverish acoustics and much furious glowering.

On the brighter side, the makers are not incapable of comedy. Raja's sidekick is played by Satyam Rajesh and is called Rani - and the fact that this is not the best joke of the film is heartening. There are quite a few situations and dialogues that are wacky and well-written, and are the kind that wouldn't be out of place in Allari Naresh movies (which reminds us - where are they nowadays?).

Then again, your being impressed with Vasool Raja's strengths - or even recognizing that it has any - has a lot to do with fiercely lowered expectations.

So a bunch of supremely bad-looking men are plotting to buy an exotic consignment (of weapons, we gather) from an overseas gangster. They hire Vasool Raja to help them out. But strangely, the bad guys start dying one after the other. Who is killing them? What is the killer's motive? Who is next on the killer's hit list? It's hard to care, but the writers, thoughtfully, give us other things to care even less about, in the form of a love story.

So on the personal front, Raja goes through the usual - he lands a girl who's too dumb to realize he's not a rich philanthropist, and who is later scandalized upon finding out the truth. But all is set right in the end, and the theatre is emptied.

Vasool Raja suffers from a generally average quality of production. As we said, the writing is about all right. Maybe the makers will get it right the next time.

Navdeep pulls the film along, and Satyam Rajesh aids him well. Taagubothu Ramesh goes overboard, and stops being funny. Brahmanandam is not funny. The heroine is someone you will have no memory of once you leave the theatre.

There is a surprisingly slick beach song, meanwhile. But Navdeep mistakes "stare intensely at the heroine" for "glare at the camera like a rapist", zapping whatever creativity the choreographer intended to show. We don't remember the rest of the soundtrack.

Vasool Raja might put you to sleep, but it won't induce nightmares. Even if that works for you, it isn't the best way to spend time and money.
Share. Save. Connect.
Tweet
VASOOL RAJA SNAPSHOT 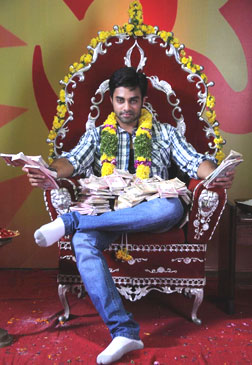 ADVERTISEMENT
This page was tagged for
Vasool Raja telugu movie
Vasool Raja reviews
release date
Navdeep, Ritu Barmecha
theatres list
Follow @fullhyderabad
Follow fullhyd.com on
About Hyderabad
The Hyderabad Community
Improve fullhyd.com
More
Our Other Local Guides
Our other sites
© Copyright 1999-2009 LRR Technologies (Hyderabad), Pvt Ltd. All rights reserved. fullhyd, fullhyderabad, Welcome To The Neighbourhood are trademarks of LRR Technologies (Hyderabad) Pvt Ltd. The textual, graphic, audio and audiovisual material in this site is protected by copyright law. You may not copy, distribute, or use this material except as necessary for your personal, non-commercial use. Any trademarks are the properties of their respective owners. More on Hyderabad, India. Jobs in Hyderabad.